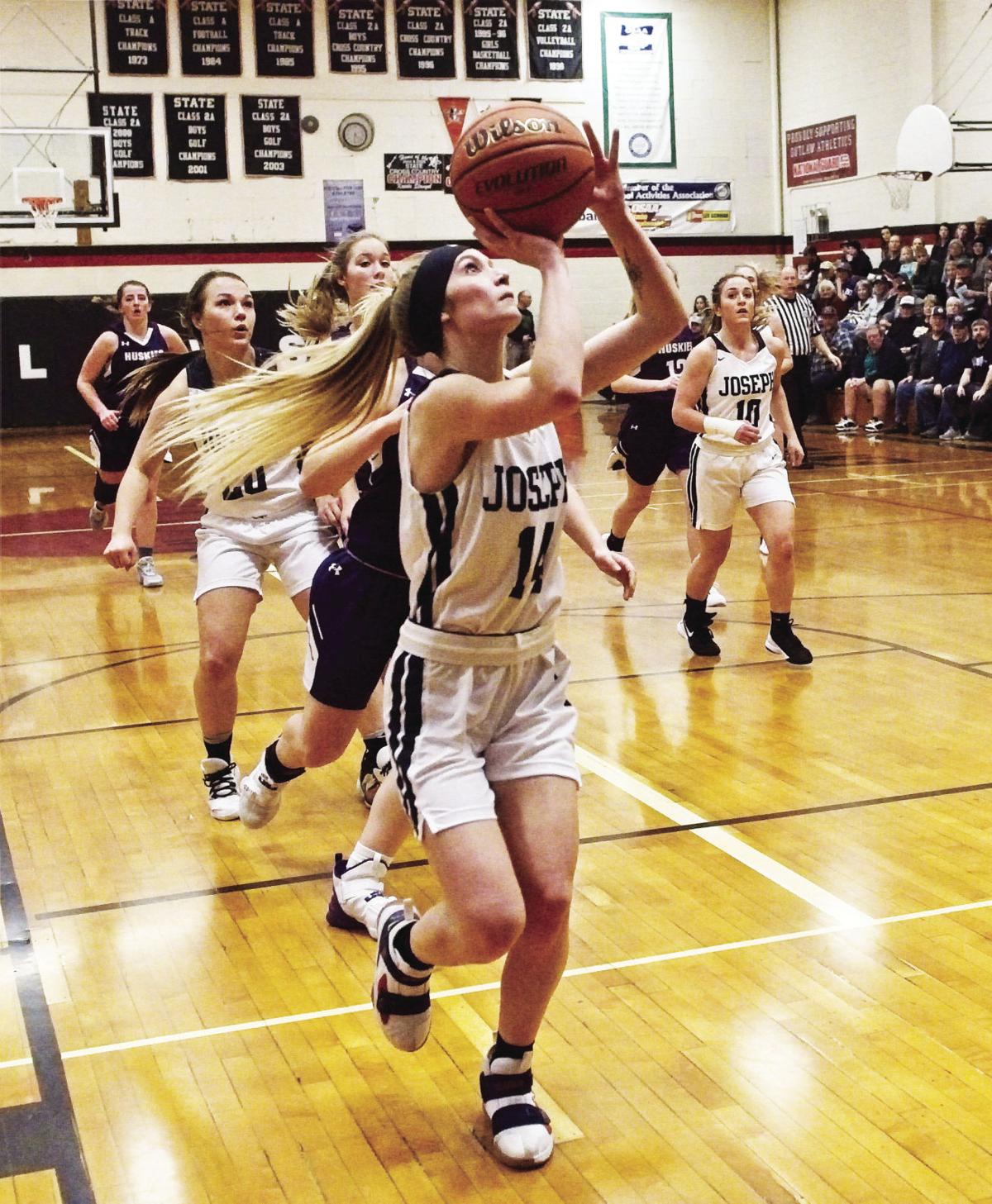 Joseph’s Madelyn Nelson puts up a shot after a steal Tuesday during the Eagles’ 37-25 win over Elgin. 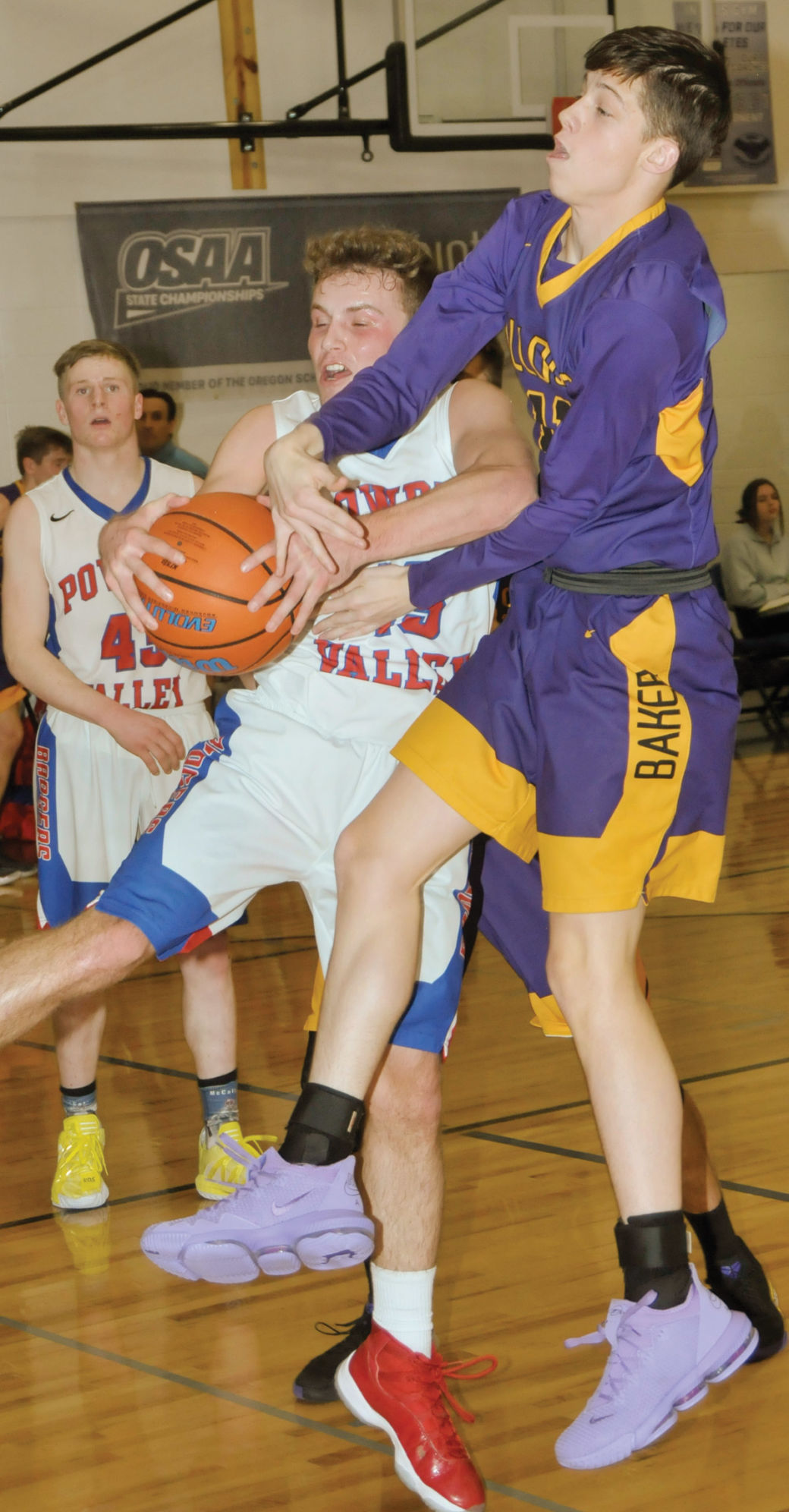 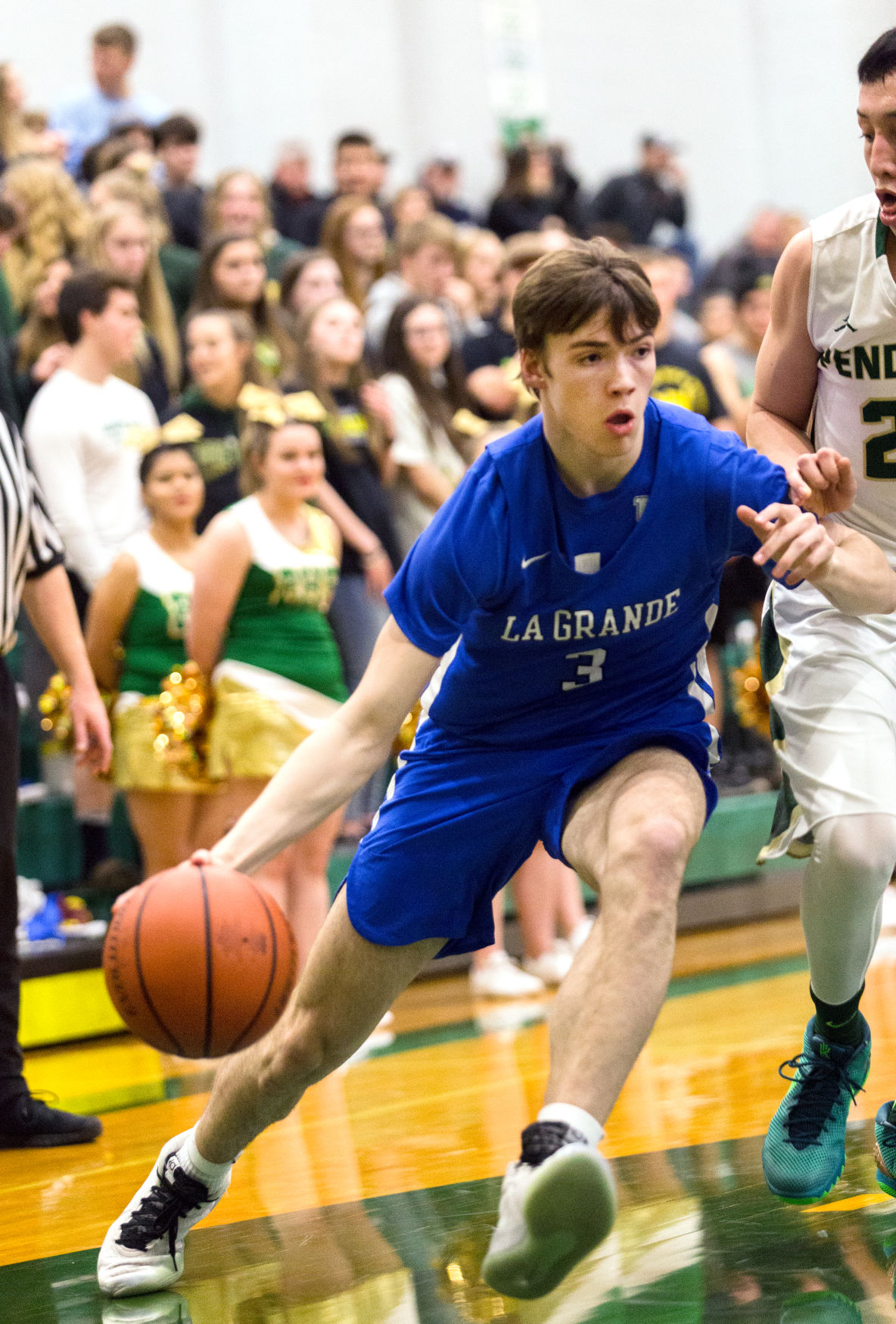 Nick DuVernay (3) goes to the hoop during Tuesday’s nonconference game against Pendleton.

Joseph’s Madelyn Nelson puts up a shot after a steal Tuesday during the Eagles’ 37-25 win over Elgin.

Nick DuVernay (3) goes to the hoop during Tuesday’s nonconference game against Pendleton.

ENTERPRISE — Sabrina Albee scored a game-high 20 points Tuesday, and the Joseph girls defense shut down Elgin offensively to win a battle of the final two undefeated teams in the Old Oregon League, 37-25.

Joseph, playing in its new home away from home in Enterprise for the first time since the Jan. 16 fire that burned its gymnasium, held Elgin to just three first-half field goals and eight points to take an 18-8 lead at the half. Albee had nine first-half points for Joseph and Madelyn Nelson, who finished with 11 points, scored seven in the first half.

“It was a good win,” Joseph head coach Lance Homan said. “With everything happening in our community and a new home gym I was proud of how hard our girls played. Elgin is a good team and so it was good to come out with a win.”

Joseph extended the lead to 25-15 after three quarters and held on in the fourth to finish off its fourth win in a row.

The Huskies, who saw their nine-game winning streak end, were led by Tymra Anderson, who scored 10 points, and Jocelyn Palmer, who added seven points.

Baker 51, Powder Valley 27: Baker freshman Jozie Ramos scored a game-high 20 points Tuesday as the Bulldogs pulled away in the second half for a nonleague road win over Powder Valley in a rare 4A vs. 1A matchup.

“They’re a really good basketball team,” Badgers’ head coach Allen Bingham said of Baker, adding he felt “if we could improve in a few areas regardless of the outcome, we’d be good. We felt like it was positive for us.”

The Bulldogs saw an 11-point first-quarter lead trimmed to 19-12 at halftime before distancing themselves in the second half.

Pendleton 64, La Grande 57: The Tigers cut a double-digit deficit down to just a single point late in the fourth quarter Tuesday, but saw its rally against Pendleton fall short in a nonleague road loss which ended the Tigers’ three-game winning streak.

Kaleb Myer’s 3-pointer brought La Grande to within 54-53 with 2:32 to play, but Pendleton responded by pushing the lead back to four and eventually taking the win.

The Tigers fell short despite a huge night from Devin Bell, who had a game-high 24 points. Myer added nine points and Cristian Mendoza scored eight points.

Baker 74, Powder Valley 62: Riley Flanagan and Caden Long each scored 21 points Tuesday to help the Baker Bulldogs outlast Powder Valley on the road in a 4A vs. 1A matchup.

“I thought we played very well,” Powder Valley head coach Kyle Dixon said. “It was a good game. They were bigger than we were (and) they just kind of beat us on the boards. It was a close game until the fourth quarter.”

Both teams got out of the gate quickly, with the Bulldogs taking a 27-24 lead after one quarter. Baker extended the margin to 47-35 by halftime and did enough in the second half to keep the Badgers at bay.

Joseph 64, Elgin 47: The Eagles pulled away from Elgin in the second half of the Old Oregon League battle at their new gym in Enterprise to end a two-game losing streak.

“Elgin was a really tough opponent and came out strong,” Joseph head coach Olan Fulfer said, “and we went back and forth most of the game until the fourth quarter where we were able to take control.”

Mason Ferre scored 20 points to lead Joseph in the victory, while Chase Murray added 16 points. The Eagles, who led just 27-24 at halftime, extended their lead to 45-35 through three quarters and didn’t let up in the fourth.

“The key factor in the point spread of the second half was way too many turnovers and them capitalizing on the opportunity,” Elgin head coach Kevin Johnson said.