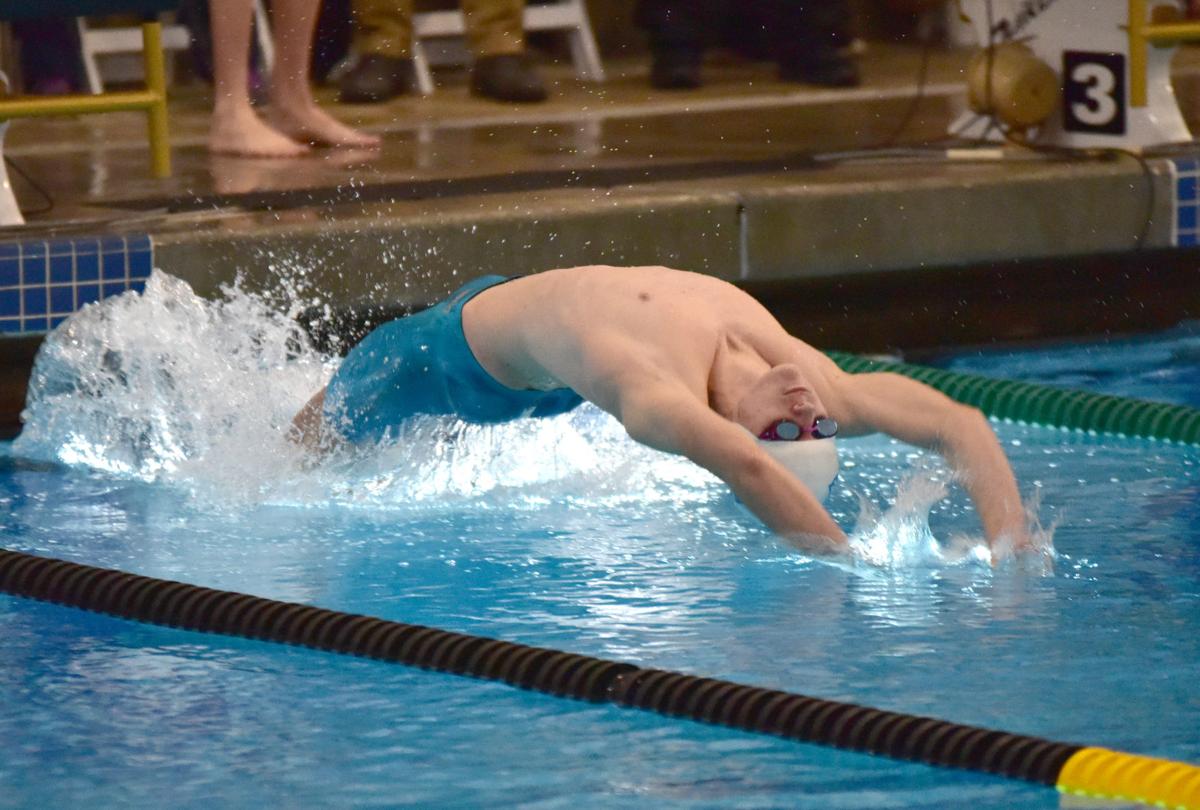 La Grande's T.J. Clay dives into the pool Saturday at the start of the boys 200-yard medley relay at the 4A/3A/2A/1A state swim meet in Beaverton. 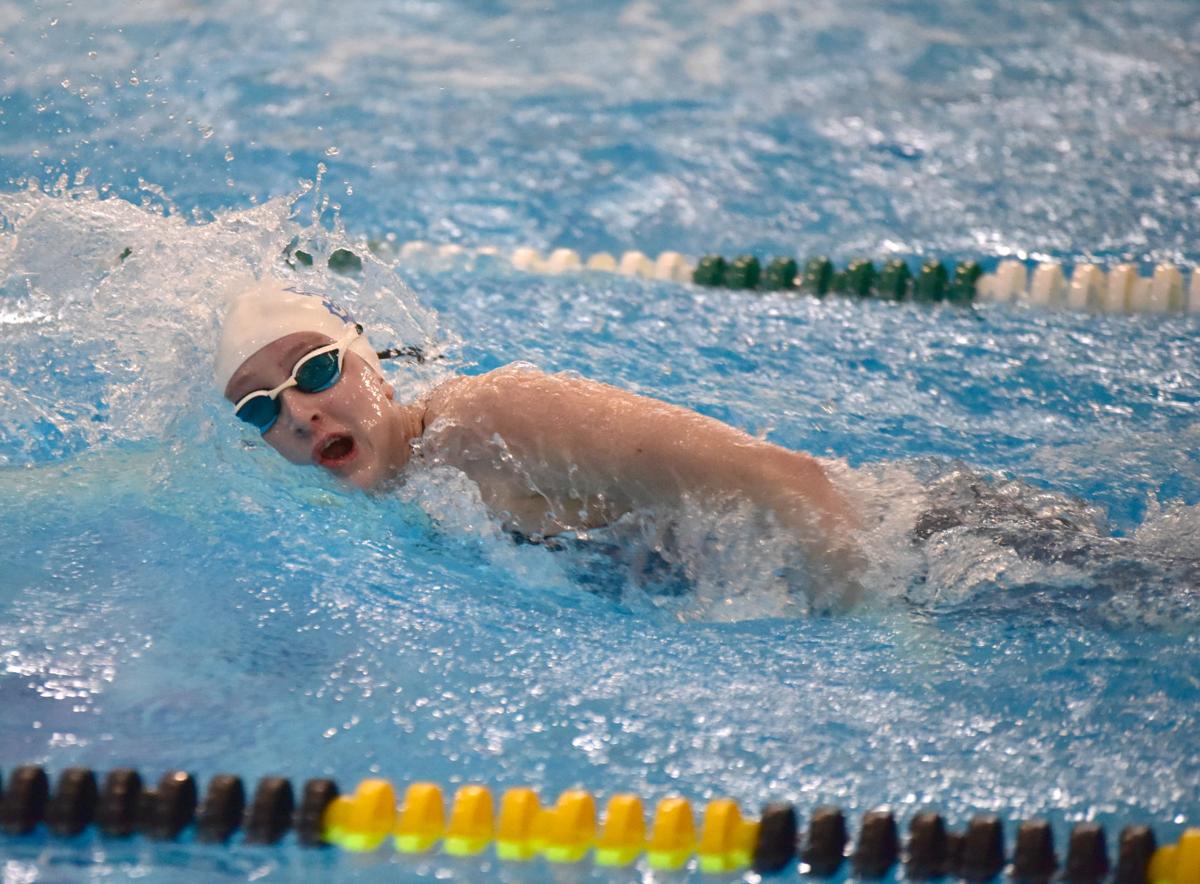 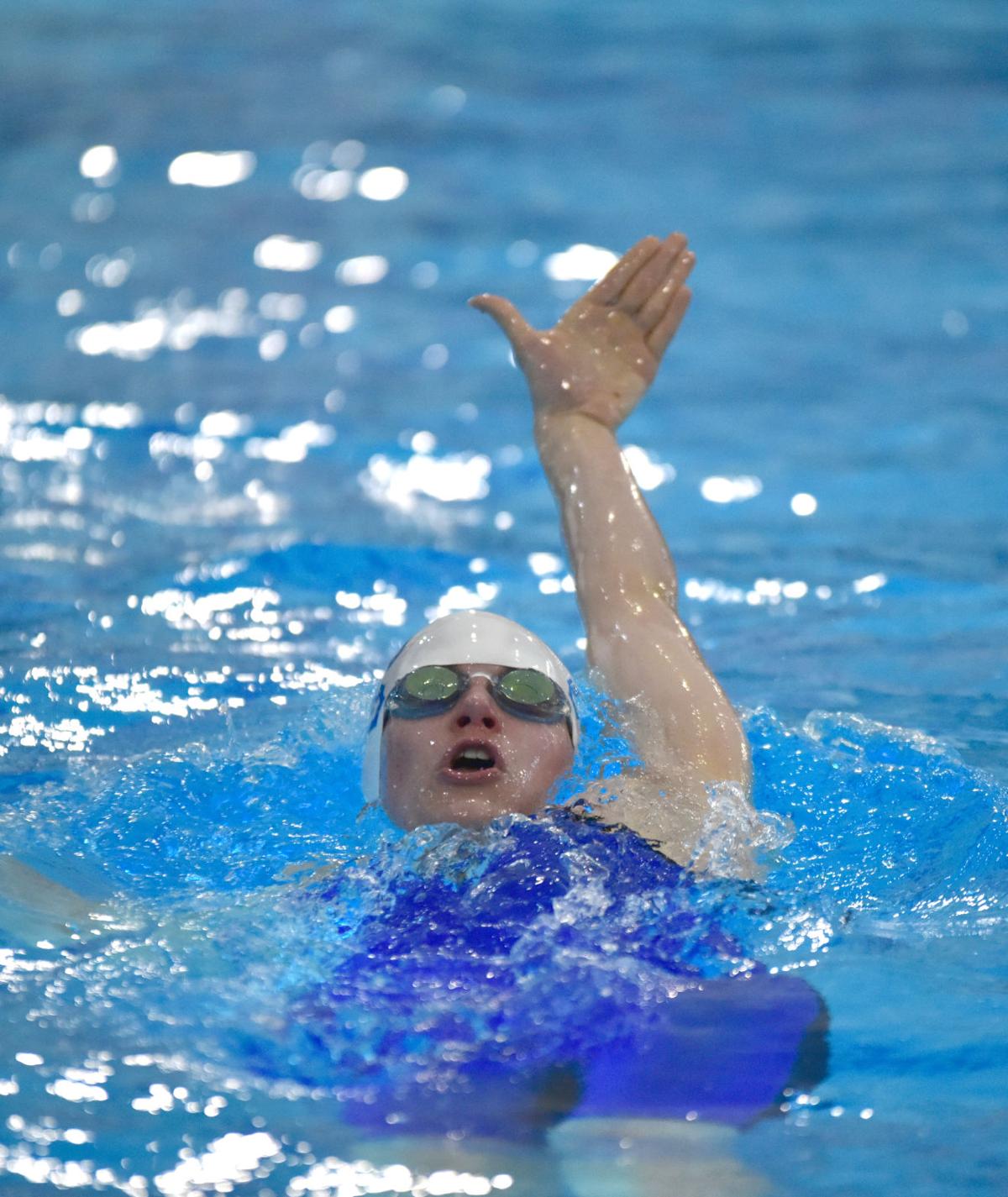 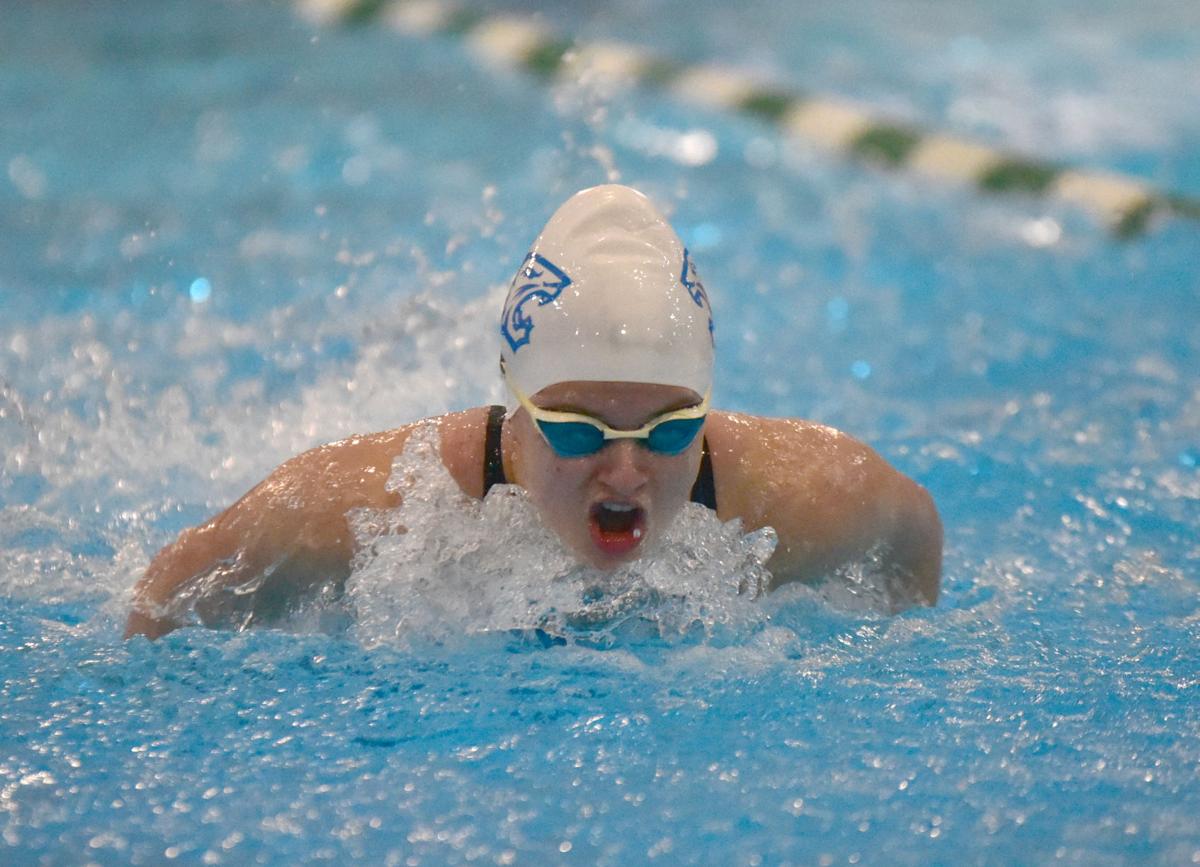 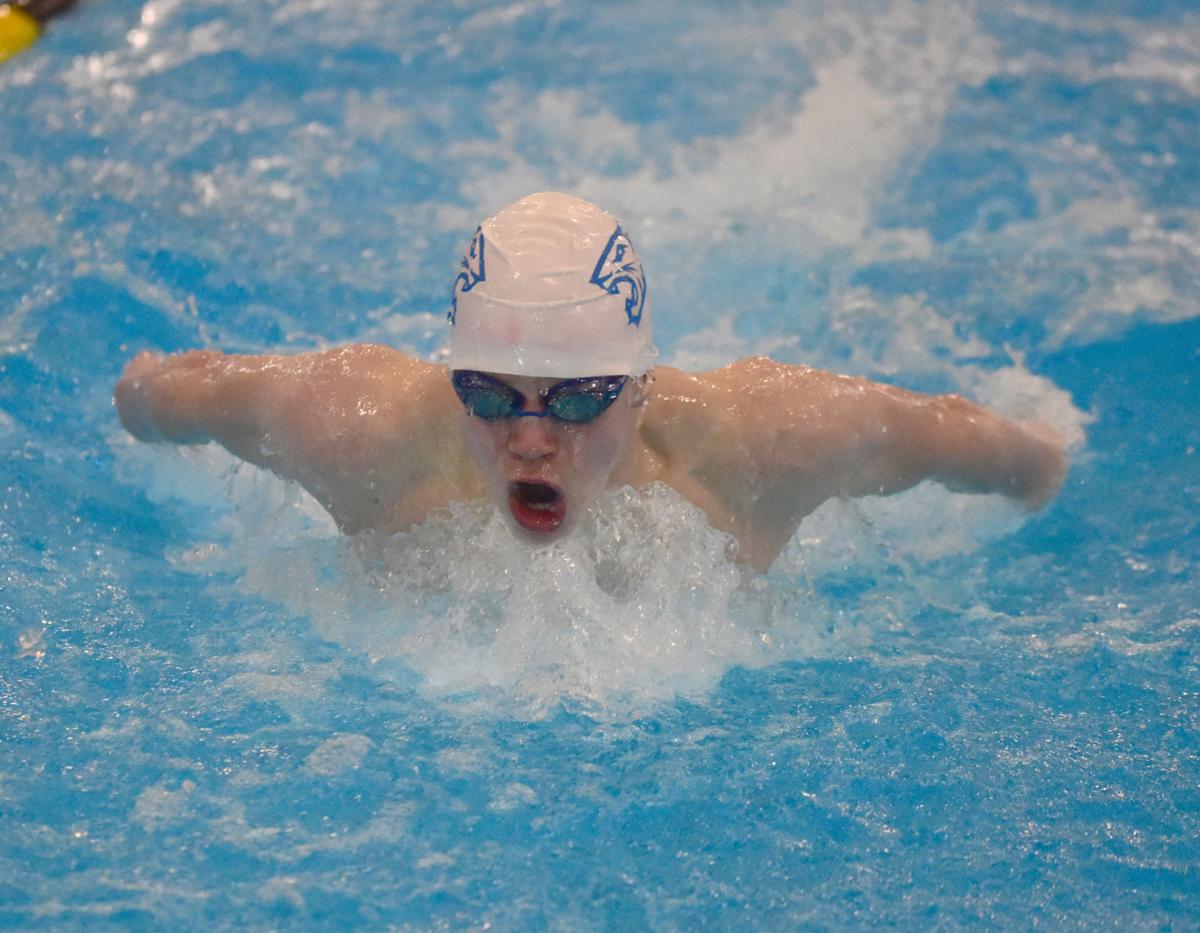 La Grande's Glenn Ricker was the state champion Saturday in the boys 100-yard butterfly at the 4A/3A/2A/1A swim meet in Beaverton. 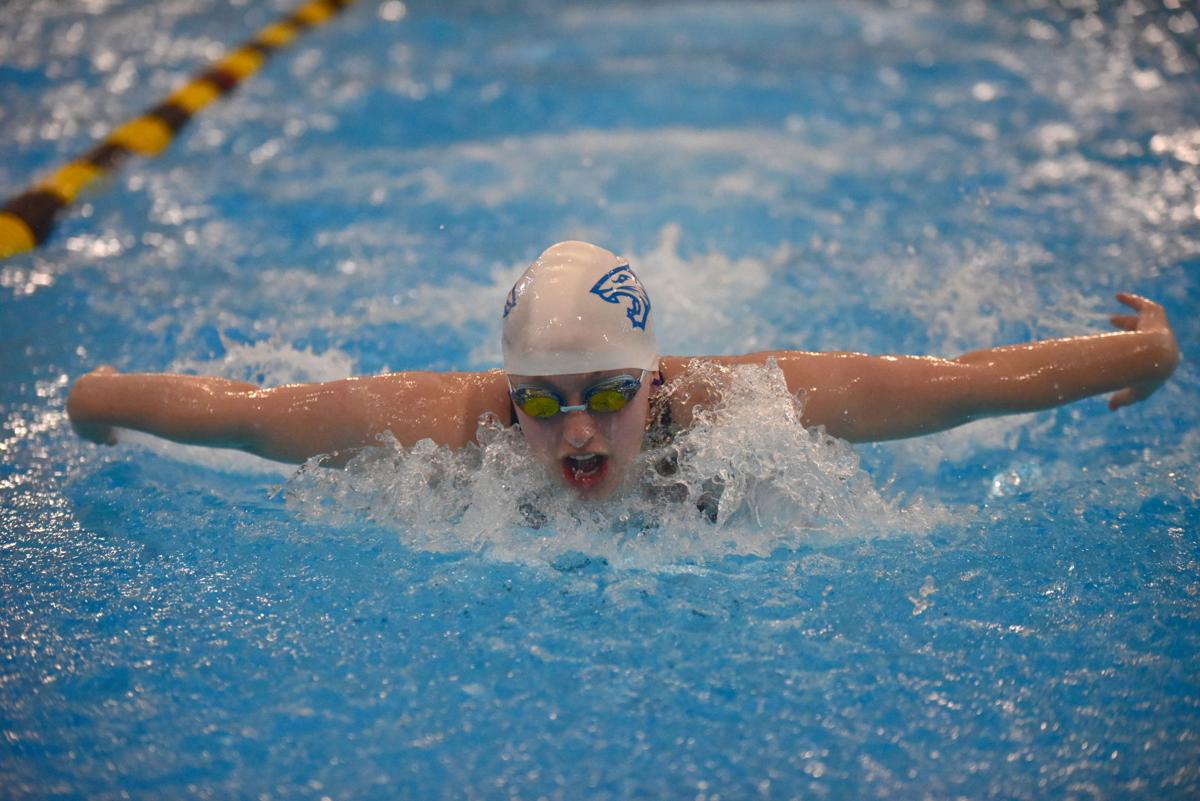 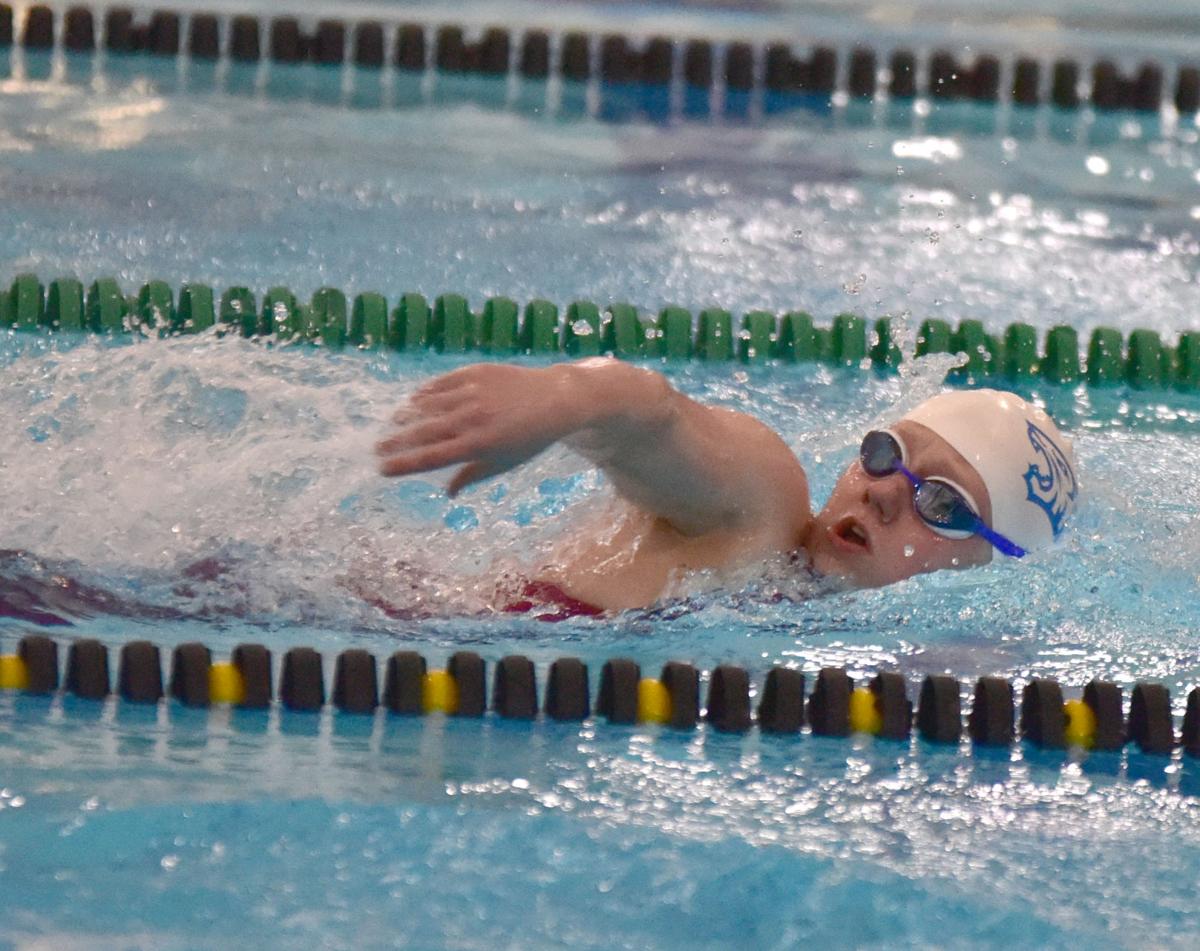 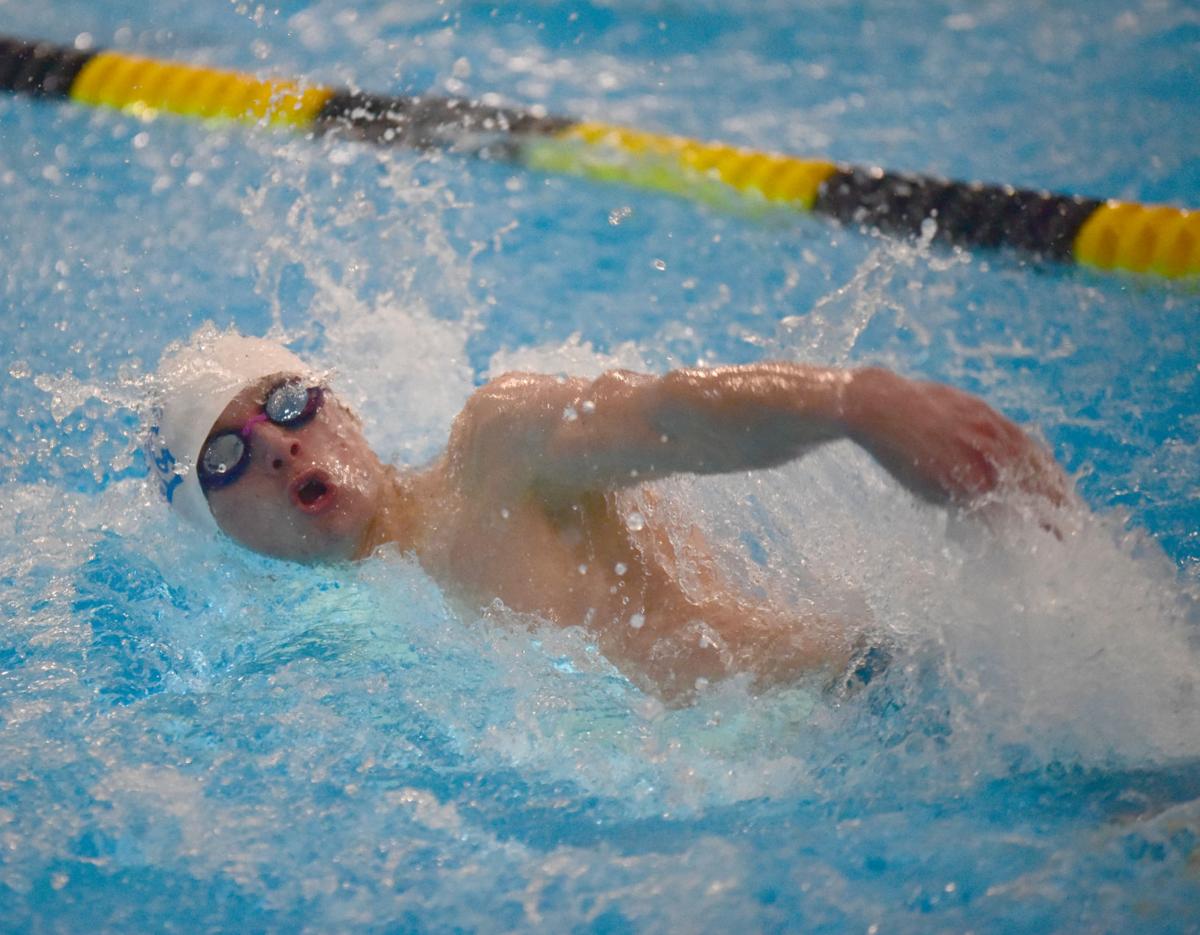 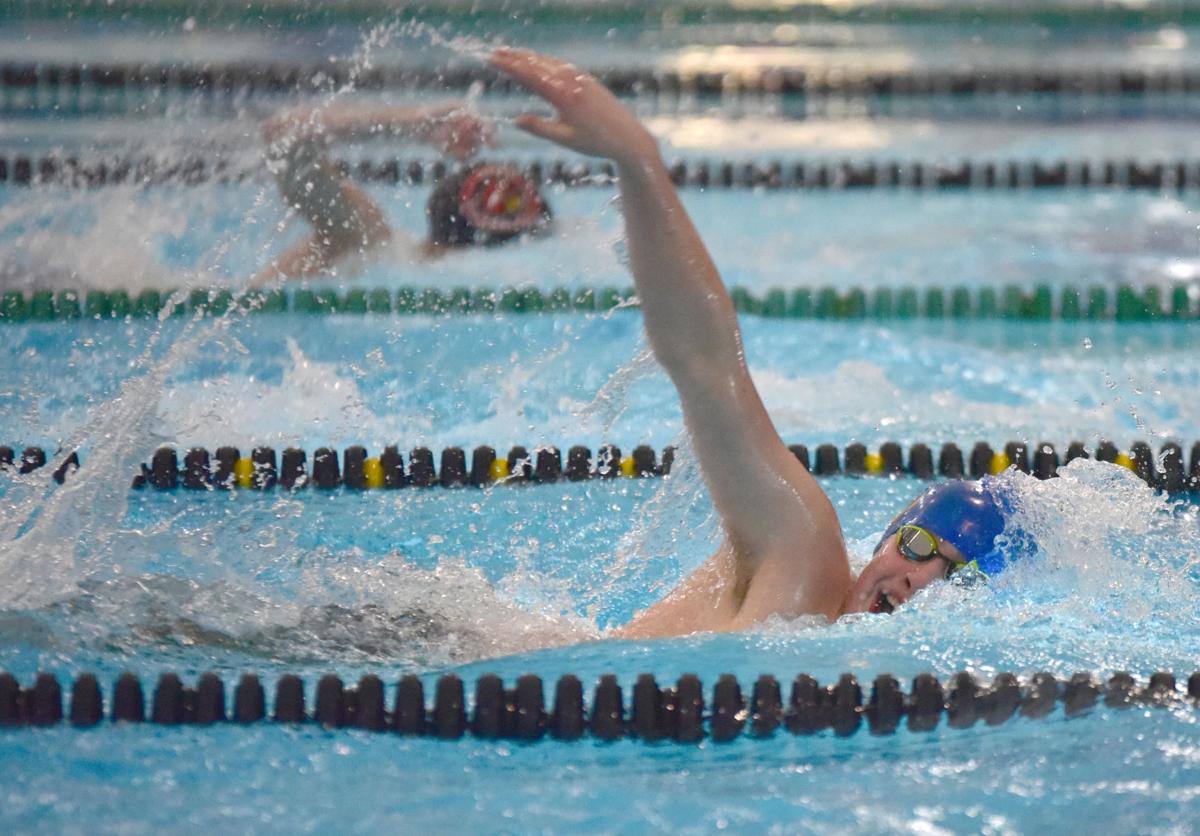 Cove's Tim Koza competes Saturday in the boys 500-yard freestyle at the 4A/3A/2A/1A swim meet in Beaverton. The sophomore placed third in the race and in the 100 backstroke to become the first Cove swimmer to place in the state finals. 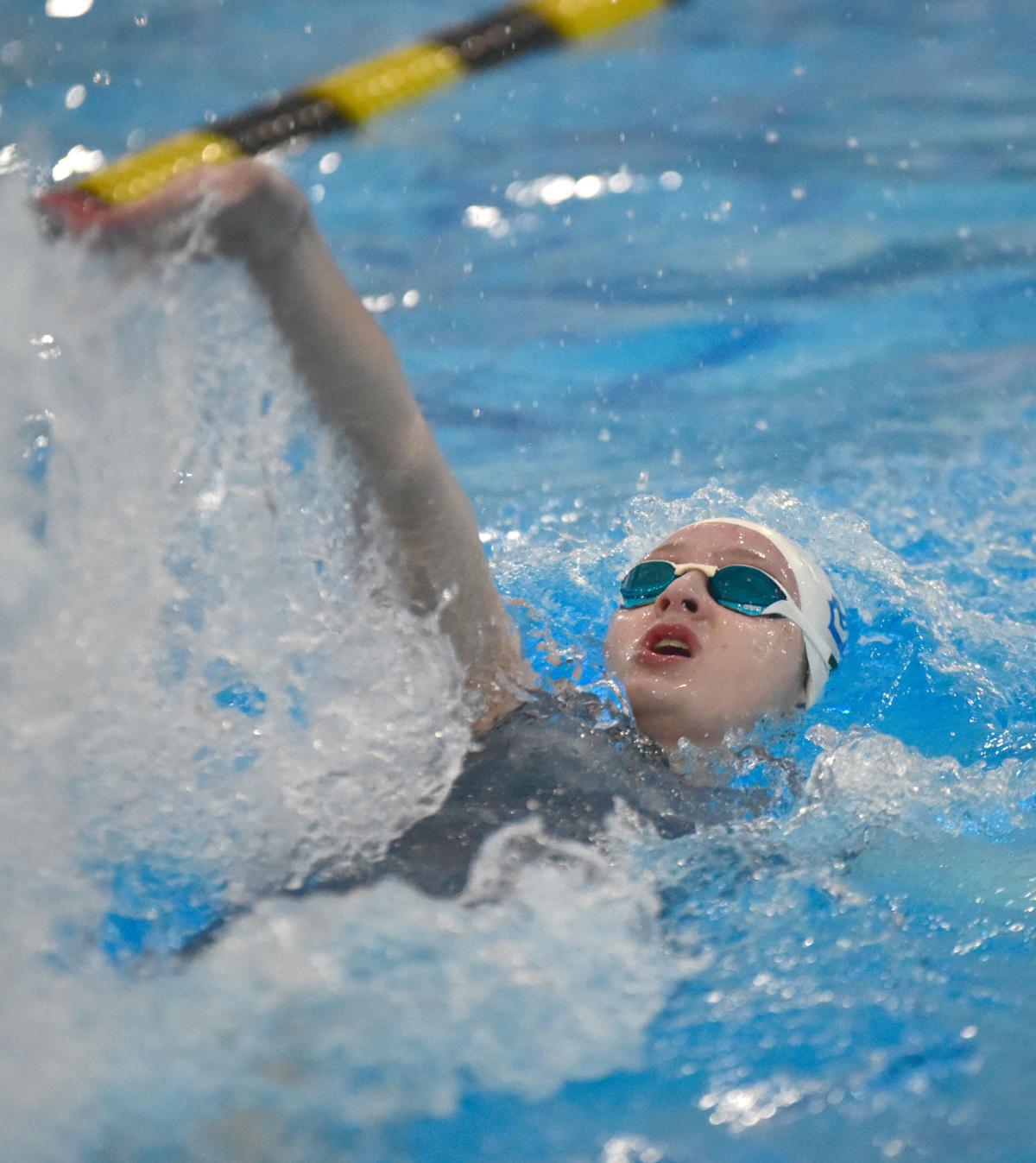 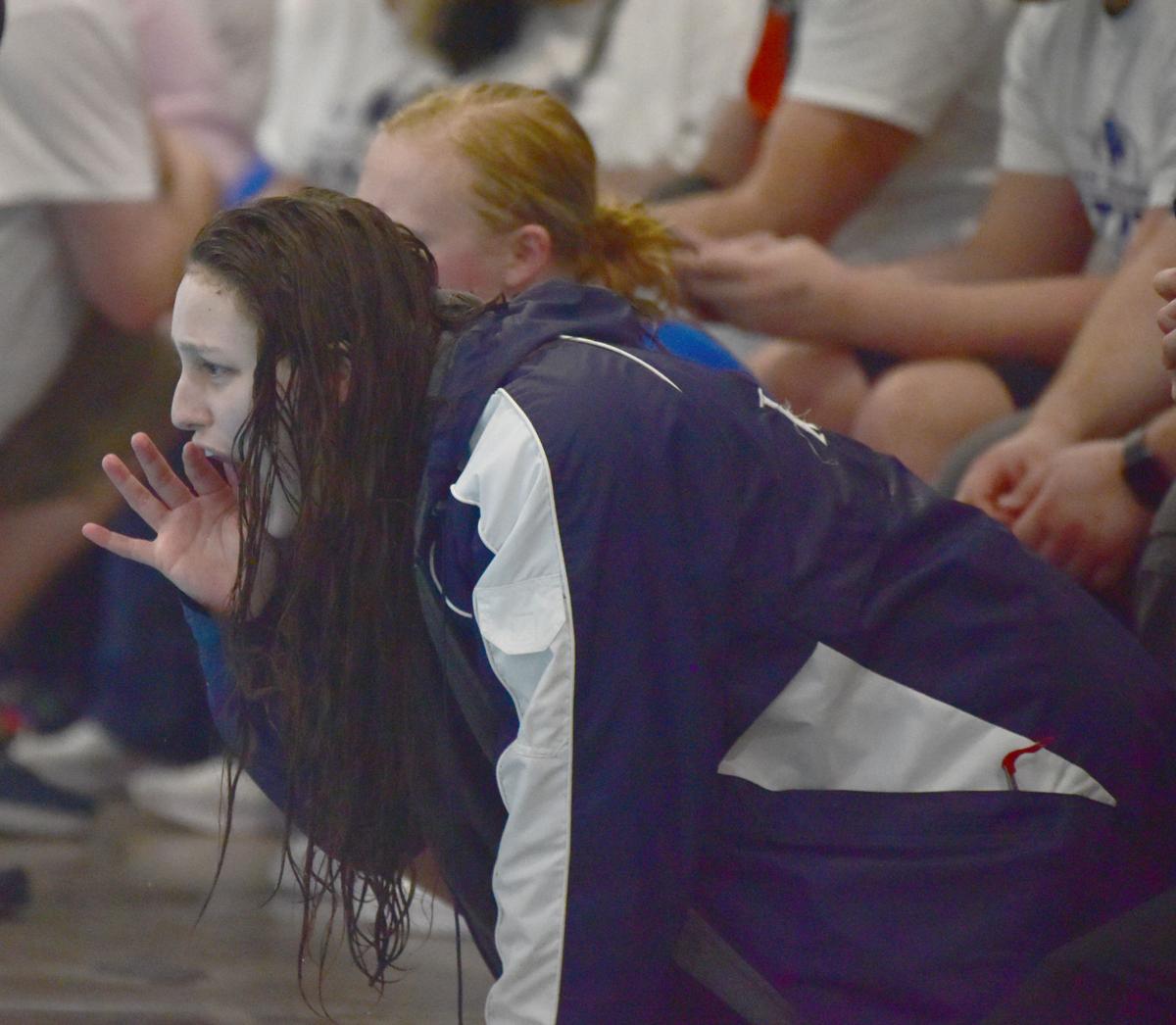 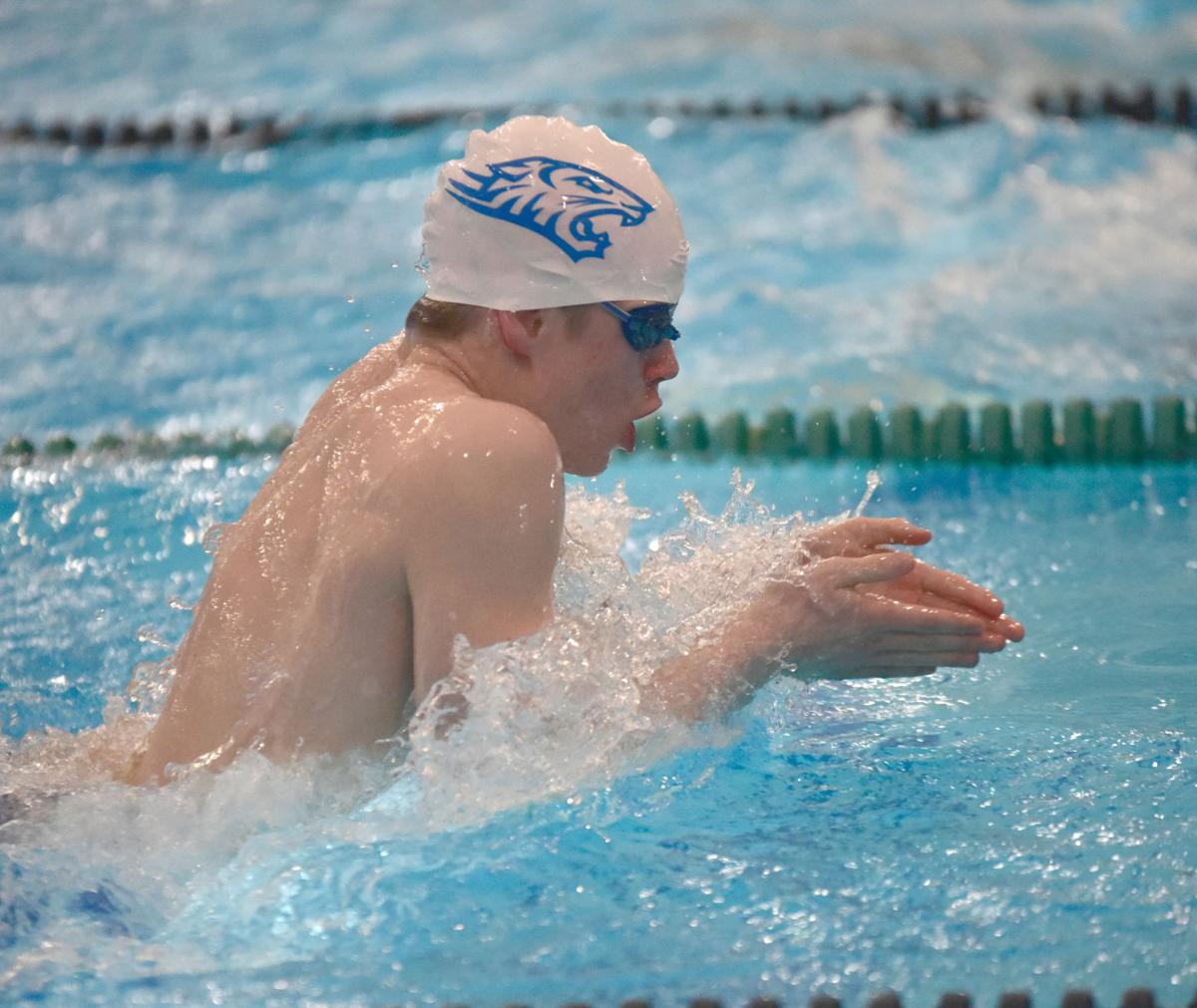 La Grande's T.J. Clay dives into the pool Saturday at the start of the boys 200-yard medley relay at the 4A/3A/2A/1A state swim meet in Beaverton.

La Grande's Glenn Ricker was the state champion Saturday in the boys 100-yard butterfly at the 4A/3A/2A/1A swim meet in Beaverton.

Cove's Tim Koza competes Saturday in the boys 500-yard freestyle at the 4A/3A/2A/1A swim meet in Beaverton. The sophomore placed third in the race and in the 100 backstroke to become the first Cove swimmer to place in the state finals.

BEAVERTON — All season long there was a hope that the La Grande girls swim team would be able to break through and claim the program’s first state title.

Those expectations increased after a performance in the district swim meet that had the Tigers entering the state swim meet projected to score the most points of any team in the field.

And while the La Grande girls missed out on a state championship Saturday night at the 4A/3A/2A/1A swim meet in Beaverton, it still set a program record as it scored 49 points to place third. That point total, in fact, is higher even than the 2012 team that scored 44 points and took second place.

It’s also the third third-place finish the Tigers have had in four years.

“It was a good year,” senior Kristal Jensen said. “It was very exciting. I was so glad that I got to come here with all these girls and do the best we could with what we had and that we got to finish third again.”

Several of the athletes admitted to feeling the pressure of being in the discussion for the championship alongside Catlin Gabel and Sweet Home, the teams that ended up taking first and second, respectively.

It did impact the team early on Saturday, but head coach Darren Dutto said once the athletes were able to put the added stress aside — which they did as Saturday night progressed — they turned in a solid effort.

“Our girls came in favored. They had a lot of pressure, (and) I think at the beginning of the meet they were feeling a little bit of that, but they swam great last night (in the preliminaries). (They felt) a little bit of pressure tonight, and then once we got past that, they did fantastic,” Dutto said Saturday. “It was just a matter of getting past that initial pressure. I thought that overall the meet went really well. Not every kid got a best time, but we had, I would say, something like 90% best times.”

The relay races were where the Tigers’ got the lion’s share of their points. The 200-yard medley relay team of Riana Scott, Romayne Ricker, Jensen and Maria Capra (1:52.64) and the 200 freestyle relay of Ricker, Capra, Reagan Kruse and Jensen (1:43.26) each took third before LHS wrapped up the meet in second in the 400 freestyle in 3:47.19. In that final race, the Tigers' team of Capra, Laramie Ricker, Kruse and Scott was in a dead heat with Catlin Gabel at the midway point before the Eagles pulled away in the final 200 to win the race, which vaulted them to the state title.

“We gave it everything we had, and I’m so happy and so grateful to be able to experience this with this team,” Scott said. “This was definitely the best season yet. We don’t care how we came out because for all of us it was a win in our minds.”

The 100 butterfly was the Tigers’ best event from an individual standpoint as Jensen placed second in 1:00.37 and Capra came in fourth in 1:01.43. Jensen’s time came a night after she had finished the race in less than a minute in the preliminaries, a goal, as she put it, that she has “been dying to do for so long.”

Kennedy Kruse later followed up with a third-place finish in the girls 500 in 5:28.48, edging Catlin’s Gabel’s Defne Alpay — an athlete she said she wasn’t sure she could beat — by 0.12 seconds.

Scott followed up her 200 freestyle race with a fifth-place finish in the 100 backstroke (1:02.49), and Ricker added a fourth-place effort in the 100 breaststroke in 1:07.49 to her earlier finish in the individual medley.

“Halfway through the meet Dutto was saying to us, 'Slow down, this is for fun,’ and he went around and talked to every one of us,” Ricker said. “And then we realized, ‘OK. Debrief. Let’s go again. Let’s try again.'”

Ricker said as a result, the Tigers performed “as a team” to finish strong.

“We came together that last half of the meet. You could really see it. It was great,” she said.

She also was surprised to learn that the team scored the most points ever totaled by the LHS girls in a swim final.

The high point total came from a facet La Grande showed throughout the season — depth.

“We scored points in most of the events,” Dutto said. “We had them distributed really well. We had the relays that got highlights, all the girls coming together and everyone did well in them."

For the seniors — most of whom have been swimming together for several years — claiming another trophy was a good send-off.

Even for those who were part of the team for just a year — like Capra, a foreign exchange student from Italy — the season was a memorable one, and was much more than just about the placing at state.

“This season was just awesome, and as far as the result, I would prefer being last with these ladies than first with everyone else,” she said.

BEAVERTON — Nobody saw this coming.

The La Grande boys swim team lost several key seniors from last year’s third-place finish at state, yet came through Saturday night at the 4A/3A/2A/1A swim meet in Beaverton to score 23 points and tie for fourth, bringing home yet another state trophy.

“We didn’t have any expectation to be in the top four,” LHS head coach Darren Dutto said. “The guys just swam and had fun. That first relay, that medley made all the difference. That was a great relay. It kind of set the pace.”

The Tigers netted 10 points right off the bat when the 200-yard medley relay team of T.J. Clay, Glenn Ricker, Adam Remily and James Thurman surprised even themselves by jumping up to second place with a time of 1:46.49.

“That race, it was insane,” Clay said. “Coming in third (at the start) and coming out second — we all PR’d, we all raced super well. It was a blast to race and a blast to watch.”

Perhaps an even bigger shock came a few events later. Ricker initially finished second in the 100 butterfly with a time of 55.57 seconds, but a disqualification of Salem Academy’s Austyn Shelton boosted the freshman to the top of the podium for his first state title.

“I can't wait until next year to do it all over again and surprise everybody,” he said, adding he learned of winning the championship moments before stepping up to receive his award. “It was right before I got onto the podium. I was being hyped up by my teammates.”

Dutto also had no clue Ricker had received the bump to the top, adding he found out moments before when he had been asked to head to the awards area to give out the medals.

“To get up there and race, have an incredible finish, swim with poise, he set himself up for (moving) into that first-place spot when those things (like a DQ) happen,” Dutto said of Ricker. “It was a great race. He has a lot of confidence. He knows himself well, and he really showed it in the 100 fly and the breaststroke.”

His effort had teammates crediting him with the fourth-place trophy, with one even handing it to him after a team photo saying it was his.

“He got best times by quite a bit, and really for me it's about those kids getting best times. Then to get a place on top of that and a couple points, it’s amazing,” Dutto said. “T.J. did an amazing job this weekend.”

BEAVERTON — Tim Koza made history in Beaverton Saturday at the 4A/3A/2A/1A swim meet by becoming the first Cove Leopard to place, earning a pair of third-place finishes to wrap the first season of the Cove swim program.

The sophomore placed third in the boys 500-yard freestyle in 5:03.79 and also was third in the 100 backstroke in 56.17 seconds, scoring eight points to help Cove finish 12th as a team.

“My 500 free didn’t feel as good as last night (in the preliminaries) but it was a drop (in time),” Koza said Saturday. “It was good overall. My 100 backstroke, it was great. Just went out there, put everything in the pool.”

Steve Koza, Cove’s head coach and Tim’s father, was proud of the effort his son displayed.

“I couldn’t have asked for more, especially on a second day swimming in the finals,” he said. “It’s hard. You already swam hard the night before, and to come in and drop more time is a real accomplishment. He’s got a good future.”

Both hope the sophomore's finish will spark more interest in the program at Cove. The coach said he was aware of students who kept an eye on what the program was doing, and getting one athlete into the finals and two to state — freshman Taylor Fox also competed in the preliminaries — could draw those in from the sideline.

“I know there are some other kids who are interested, and I think they kind of watched this year to see what happened,” Steve Koza said.

“I think it should,” he said of the program gaining more interest. “The beginning of the school year, nobody knew we were swimming. We finished with district and suddenly the whole school knew.”

The sophomore also was happy to be the trendsetter, becoming Cove’s first state placer.

“It’s a really big deal,” he said. “I hope this program continues and we’ll get a whole bunch more people in it. We’ll go places, bring more people next year hopefully, and have other state placings. It’s really great to be the first."