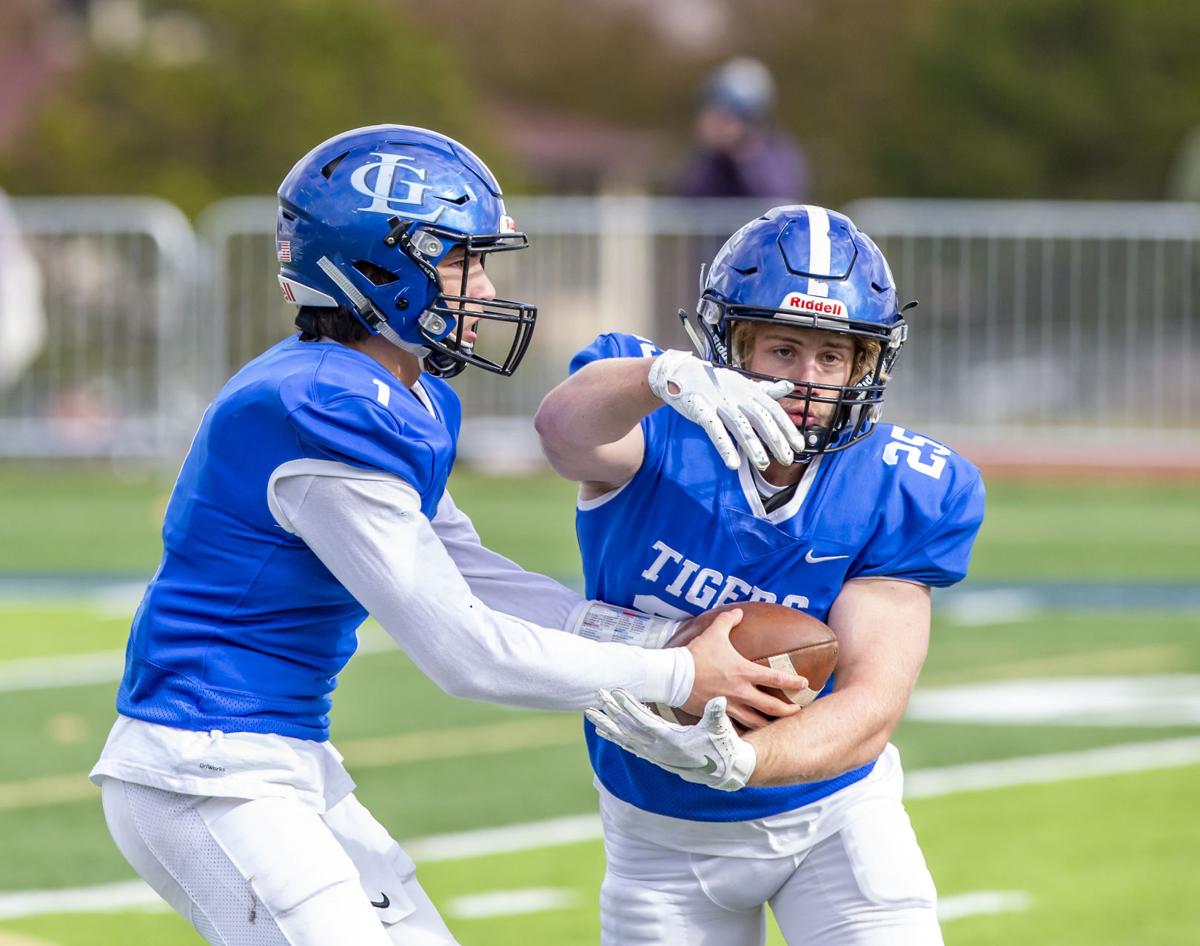 La Grande running back Nathan Reed (25) takes a handoff from quarterback Parker Robinson (1) during the La Grande Tigers' 34-0 win over the Baker Bulldogs on Oct. 26. 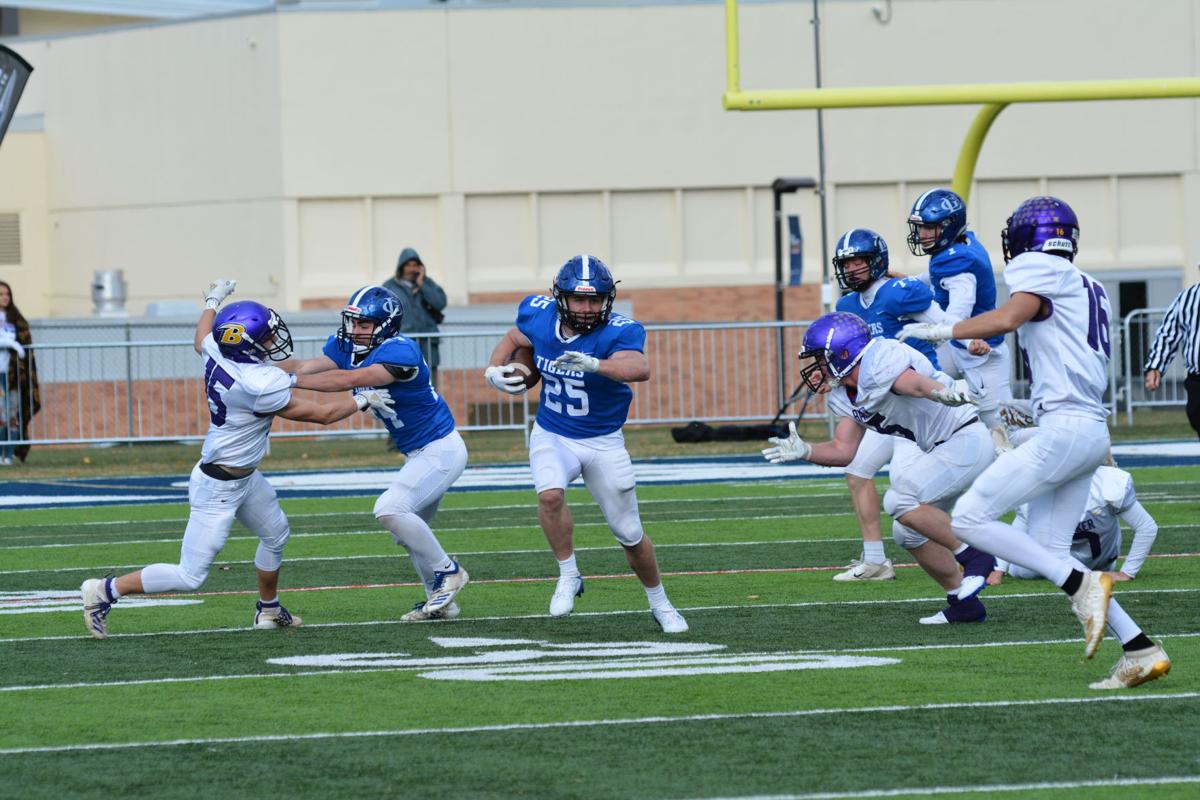 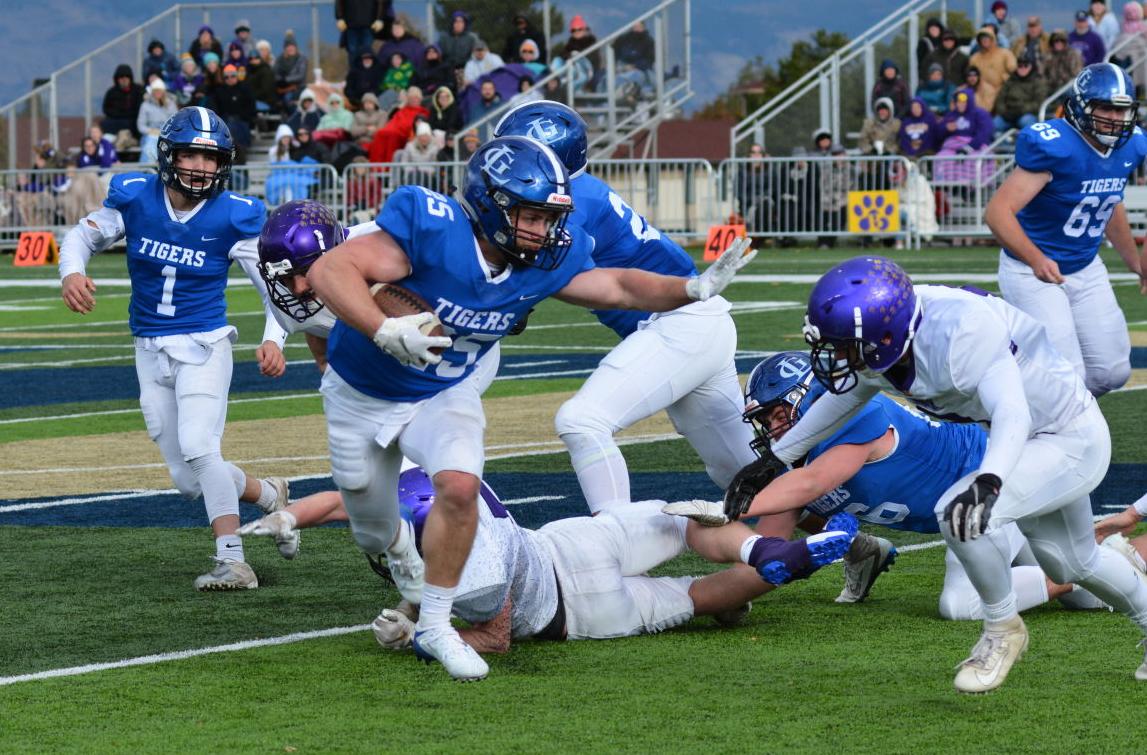 Reed, who is coming off a broken leg suffered during the wrestling season, has followed up last year's 1,261-yard season with 1,108 yards so far this season.

To this point, Nathan Reed’s senior season has been everything a player could want.

The running back and linebacker has been a major catalyst in helping the La Grande Tigers to an undefeated regular season. The Tigers enter the Class 4A playoffs as one of the favorites for a state title — which would be the program’s first since 1974.

“We couldn’t ask for a better season so far,” Reed said. “It’s been such a fun year.”

And while the team has moved past it, last year’s state quarterfinal loss to Gladstone on a last-second field goal still serves as motivation for the Tigers and for Reed.

It’s possible, too, the teams could meet this postseason. If Gladstone and La Grande each win their first-round games, they would have a quarterfinal rematch at Community Stadium.

Reed will have a major say in what happen in the playoffs, just as he has throughout the season. Reed has rushed for 1,108 yards, averaging 138.5 yards per game for the 8-0 Tigers. The number is impressive enough, but more so when considering Reed has often been an observer during the second half of games with them often well in hand by halftime. Only one of La Grande’s games this season has been decided by less than 21 points, and the Tigers are winning by a margin of 38 points per game on average.

La Grande head coach Rich McIlmoil said Reed came in determined to meet or surpass in yardage the 1,261 he rushed for a year ago.

“He’s coming off a season where he finished with (more than) 1,200 yards. We haven’t had a running back for a long time rush for over 1,000 yards in a season,” McIlmoil said. “The expectation was to match or exceed that.”

The numbers are impressive, too, since Reed is coming off an injury that cost him the majority of his wrestling and track seasons as a junior, and one that had him entering the fall with some doubts of the level of play he could bring to the field.

Reed was injured 15 seconds into his first match at the Rollie Lane Invitational in early January, suffering a broken left leg. He knew right away, too.

“I caught it wrong on the mat and I felt it break. I knew it was broken,” he said.

Reed at first hoped he would be able to be back by the Tigers’ district wrestling tournament, but the injury proved to be too severe. He later learned he also had torn ligaments in his left ankle. It meant the junior wouldn’t have an opportunity to build upon his second-place individual finish at state in wrestling, and would be limited in his chance to get back in condition for track, where he had taken second in state in the 110-meter hurdles and 300 hurdles as a sophomore.

“That was heartbreaking,” he said.

But Reed was determined to do what he could to get back into competition quickly.

“I thought I could make it back by the end of the track season, and I wanted to be back as soon as I could,” he said.

Reed returned for the final two regular-season meets before the district track meet and went on to win the district title in the 300 hurdles on May 11. A week later, he took third in the state in the event.

“He worked really hard coming off that injury in wrestling,” McIlmoil said. “That was huge for him to come back. It’s a testament to his hard work and dedication not to just sports, but his integrity. He wants to work hard. He wants to finish and be the best he can be. It’s not just about him, it’s about the team.”

The injury did limit what he could do on the track. He didn’t compete in the 110 hurdles because his still-recovering left leg is his landing leg on the hurdles.

The injury also gave him some concern entering the football season, even though he had fully recovered.

“I had some doubts in myself coming into the season off the broken leg,” he said.

McIlmoil said he noticed apprehension in the running back during summer camps, but felt it was gone by the time the season began.

“There is a major (mental) block that happens to all athletes coming off an injury,” the coach said. “As he worked on it and did some things mentally to improve himself and his mental game, (his confidence) started to come back. He took the bull by the horns, did what he needed to do and got to where he needed.”

While Reed is largely noted for his rushing ability, McIlmoil said he is also a solid defender, adding Reed’s play at middle linebacker gets overlooked in the midst of offensive accolades.

He’s also stayed healthy partly due to being pulled early in the blowout wins. He said he’d like to be on the field more but he understands the potential long-term benefit of limiting touches during the regular season in lieu of the playoffs, which begin Friday against Estacada.

“Last year at this time he was banged up (from the long season). This year he’s healthy, (and) this is when we need him to be the most healthy,” McIlmoil said.

Reed said he’s entering the playoffs at 100%, and he feels he’s in better condition than this time a year ago.

He said, too, he won’t be satisfied with anything less than what the team set out for at the beginning of the season — a state championship.

“I’ve gotten second place enough. I’ll be very disappointed if we don’t win it as a team in football,” he said.