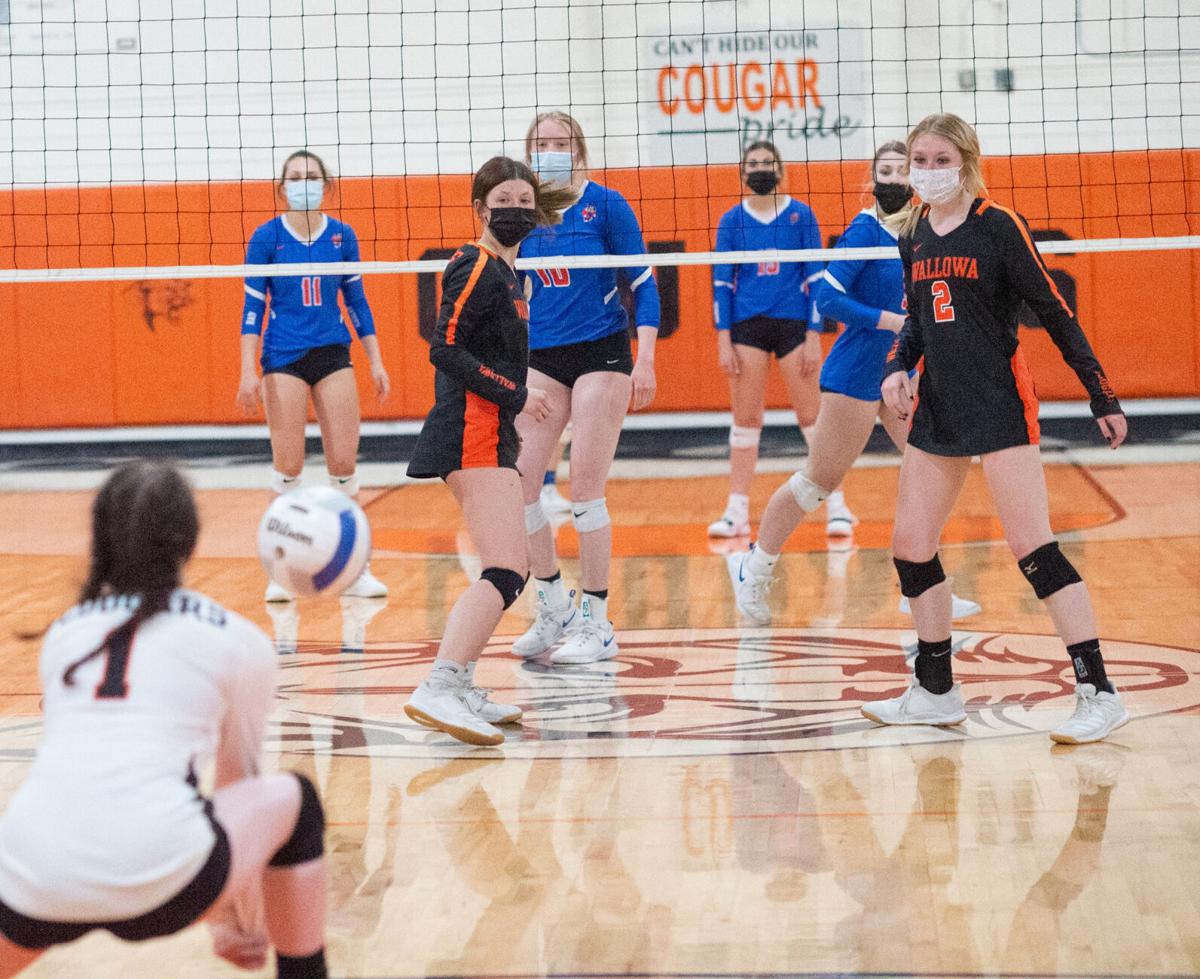 Wallowa’s Sophie Moeller, middle, and her sister Ella Moeller, right, look on as a play is made during the Cougars’ match against Powder Valley Friday, April 2, 2021. 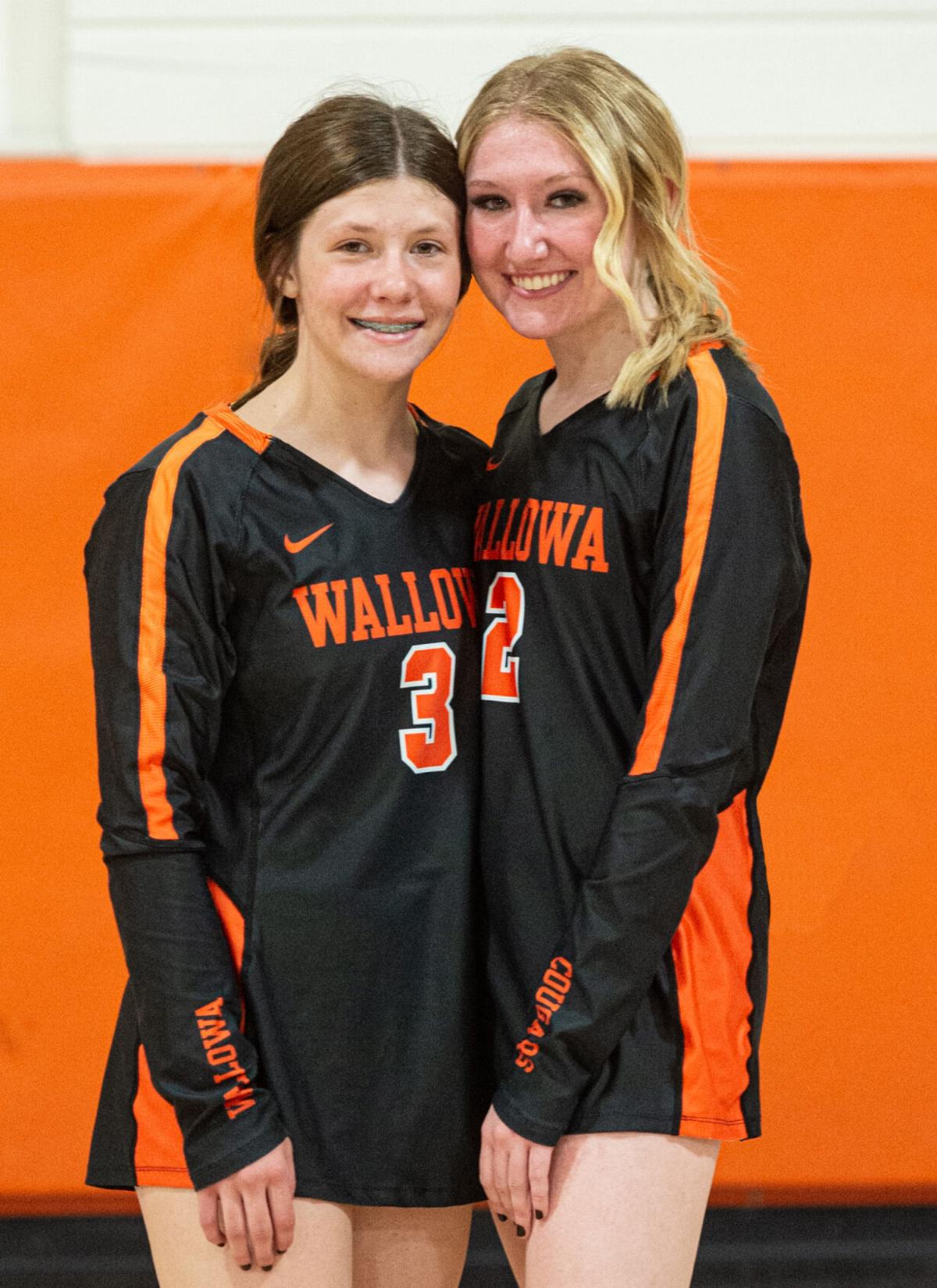 Wallowa’s Sophie Moeller, left, and her sister Ella Moeller pose for a photo. The sisters — senior Ella and freshman Sophie — are playing their lone season together on the volleyball court during the COVID-19 pandemic. 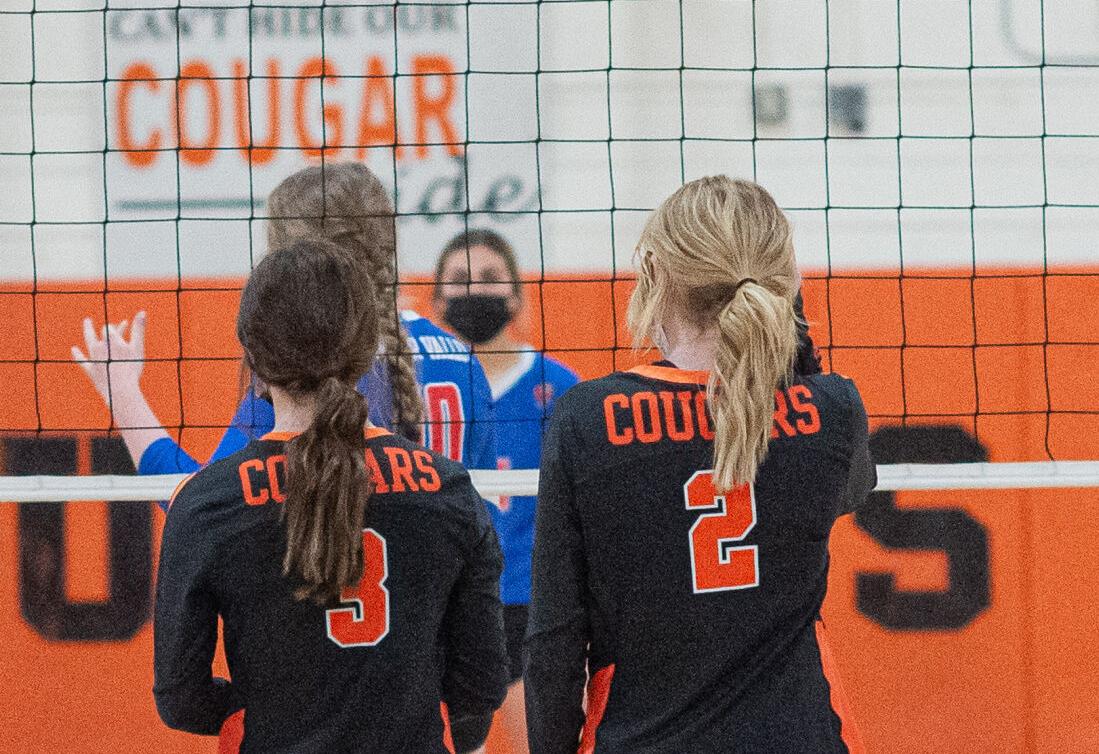 Wallowa’s Sophie Moeller, left, and her sister Ella Moeller look across the net at Powder Valley players during a match Friday, April 2, 2021. The sisters — senior Ella and freshman Sophie — are playing their lone season together on the volleyball court during the COVID-19 pandemic.

Wallowa’s Sophie Moeller, middle, and her sister Ella Moeller, right, look on as a play is made during the Cougars’ match against Powder Valley Friday, April 2, 2021.

Wallowa’s Sophie Moeller, left, and her sister Ella Moeller pose for a photo. The sisters — senior Ella and freshman Sophie — are playing their lone season together on the volleyball court during the COVID-19 pandemic.

Wallowa’s Sophie Moeller, left, and her sister Ella Moeller look across the net at Powder Valley players during a match Friday, April 2, 2021. The sisters — senior Ella and freshman Sophie — are playing their lone season together on the volleyball court during the COVID-19 pandemic.

WALLOWA — They have been basically inseparable their entire lives.

But because of the age difference between Wallowa High School senior Ella Moeller and her younger sister, freshman Sophie Moeller, the one area the two had not been together was on the volleyball or basketball court.

“This is actually the first year we got to play sports together,” said Ella, the setter for the Cougars volleyball team. “Because we’re three years apart, in junior high, it’s within a two-year span (between sixth and eighth grades), Sophie just missed that. This is the first year we were able to play together.”

“We had talked about it because Sophie’s class is really athletic, and my class is athletic,” Ella said. “We were really looking forward to those classes getting to play together. … We talked about that this was going to be the year.”

Sophie, a right-side hitter for Wallowa, said her class had watched the senior class, and was indeed looking ahead to when they would play with them, instead of being just observers.

“We were all very excited,” she said. “Most of my classmates were looking forward to getting to play with the seniors.”

Those plans, like everything else the past year, were shaken up severely by the COVID-19 pandemic. And though there was initial disappointment the two had to work through, both have been able to come to a mindset of gratitude — mainly in that although the season looked very different, they at least got to see the court.

“It took me a while to see we are pretty lucky,” Ella said.

Having sisters on the same team can, at times, cause drama or in-fighting, but there has been none of that with the Moeller sisters, head volleyball coach Janea Hulse said.

“I haven’t had one problem. They do work really well together,” she said. You don’t see (issues) on the court with those two. Usually they are the ones trying to lift each other up when others can’t get through.”

“It’s been really fun,” the elder Moeller sister said. “Sophie and I have always had a bond where we can joke around with each other and mess with each other. We have a good time. It helps lighten up practice when Soph and I can get into it and other people get involved. It turns into a big girl fight in a good way — if you know what I mean.”

Sophie said, though, that the team — and the two of them — can buckle up and focus when they need to.

“I think our team is very amazing in that way because we can all go from laughing, rolling around on the court, to getting right back into the next play in practice. And I think that is pretty amazing,” she said. “Our team has a pretty good bond, I think.”

The sisters have contributed a major piece to the team’s on-court success this spring, too.

“They are a really fun dynamic,” Hulse said. “They’re quirky and funny, and at the same time very competitive. They want the best for themselves (and) for the team. It really feeds well within our team.”

Hulse knows the girls well, too. Not only has she coached Ella for four years, she has a son in the same freshman class as Sophie. And their mother, Annette Moeller, is the assistant coach. As a result, there is a deeper level of communication that can be read even during a pandemic.

“It’s fun, because really between the four of us with Annette, myself and the girls we can look at each other, and even with the masks they can tell” what the look means, Hulse said, whether it’s an encouraging or correcting one.

The season has been a highly unusual one for the duo. In the fall, they returned to school somewhat blindsided by the reality that the pandemic hadn’t dissipated, and they had come in from a summer irrigating job where they were consistently out in a field socially distanced and didn’t need masks.

The volleyball season, which was supposed to start in late summer, ended up being highly different as well. There was no postseason to play for, almost no fans in the stands and numerous rule changes.

Even in the spring, while they have had a bit more normalcy and gotten to play teams outside of the region, there still are no state hopes. Fans can come, though there still are limitations.

“I think it was especially hard for me, being a senior and this being my last chance to play high school sports,” Ella said. “Everyone right now is looking at everything getting taken away from them and everything we have lost. We do get to play volleyball. It may be limited, but people do get to come watch us. We’re getting to do something. We’re not shut down completely. We’re getting to do all those things. We’re just having to follow stricter rules.”

The younger Moeller sister said she also struggled early with what was taken away, and with the uncertainty.

“I definitely did not have a good mindset. Coming up as a freshman, I was excited to come up and play sports, and wanting my first year of high school to be normal. It took me a while to realize that we are still getting to do something,” Sophie said. “When it was looking like we weren’t going to get to do something, that was hard.”

They have gotten the season in, and have helped Wallowa go 5-5 overall on the volleyball court headed into the finale Friday, April 9, at Elgin.

The sisters have grown even closer during their lone season together, another feat considering how close — inseparable, in fact — they already were.

“When you play a sport you always create bonds with your team … you always create a bond,” Ella said. “It has brought us that much closer. Our team that we are both on is the same one. We get to share that bond not only as sisters, but teammates.”