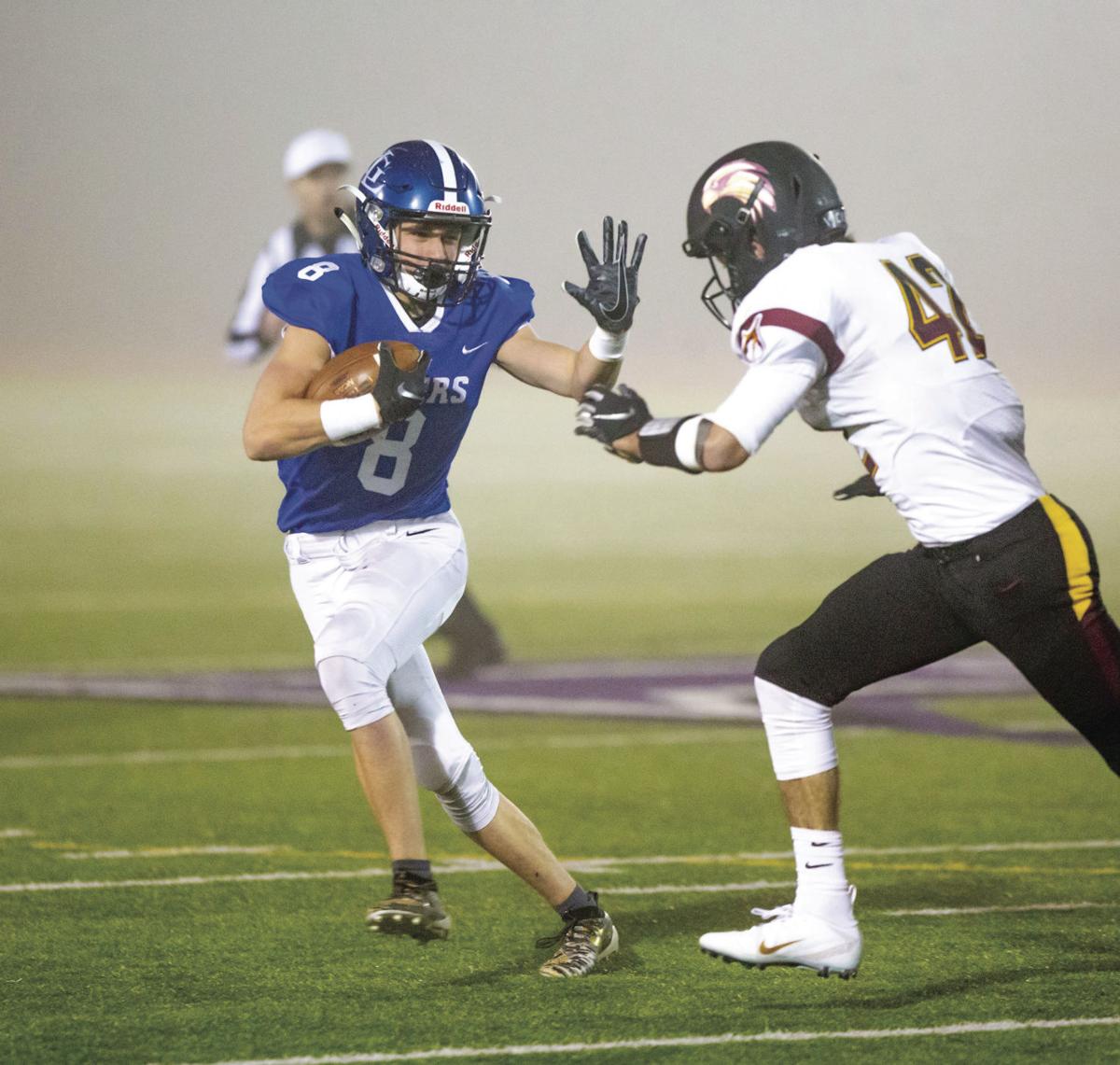 La Grande's Payton Cooper, left, scored a touchdown in last week's 68-0 semifinal win over the Dalles. The Tigers will play for their first state championship in 45 years Saturday. 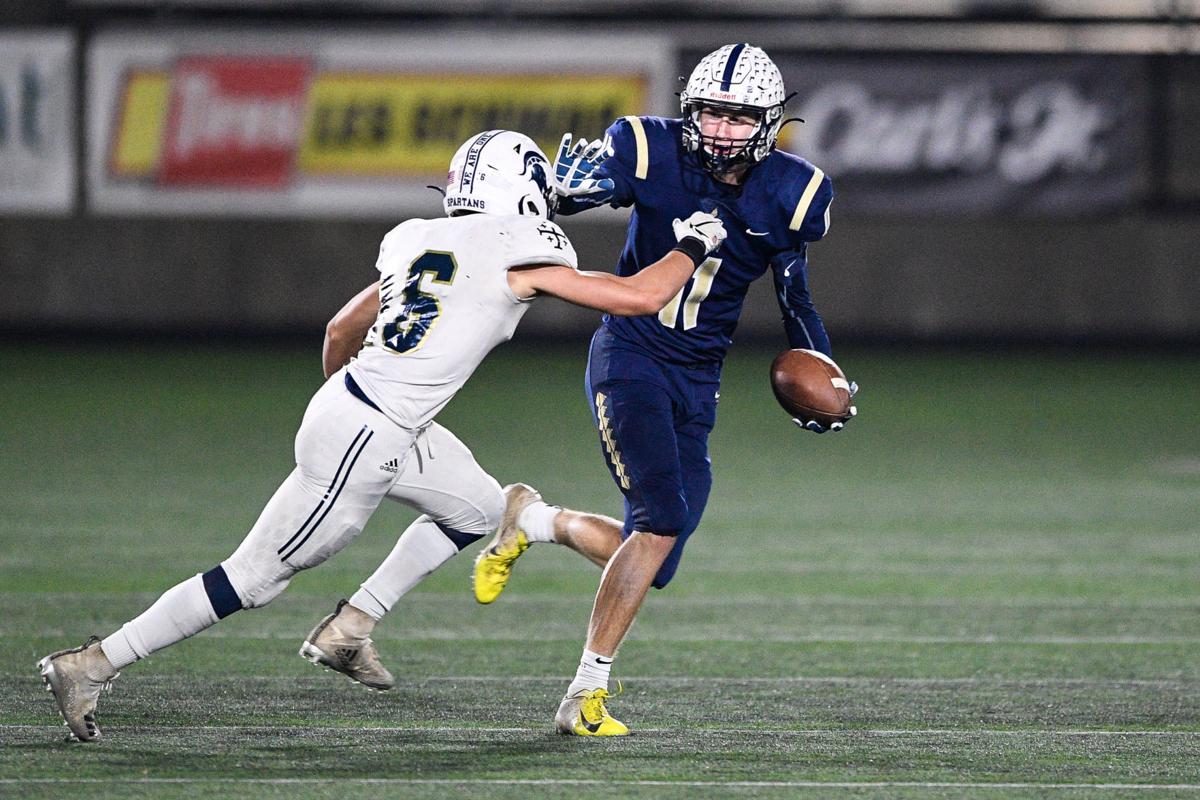 Banks' receiver Jacob Slifka, right and the Braves will play for a second straight state championship Saturday when they face La Grande in Hermiston.

La Grande's Payton Cooper, left, scored a touchdown in last week's 68-0 semifinal win over the Dalles. The Tigers will play for their first state championship in 45 years Saturday.

Banks' receiver Jacob Slifka, right and the Braves will play for a second straight state championship Saturday when they face La Grande in Hermiston.

LA GRANDE — For many of the La Grande Tigers, it still hasn’t fully set in that they’re going to play for a state championship Saturday.

“It’s mind-blowing that we’ve made it this far,” senior lineman Chris Woodworth said. “It’s always been our goal, but now that it’s here it’s really humbling and crazy to think about.”

Despite the shock of being there, head coach Rich McIlmoil said his team has stayed focused during practice this week as the Tigers prepare to square off against defending state champion Banks in Hermiston in Saturday’s Class 4A state championship game.

“They know what’s at stake right now,” McIlmoil said. “They’ve heard all the hype. They know how good Banks is. They’ve watched a lot of film. They know all the work they put in this season. I think at the end of the day they just know they need to go out and play hard.”

The teams have seemingly been on a collision course most of the season, both powered by a stout defense — La Grande has allowed just 7.91 points per game, Banks 12.64 — and a dynamic offense — 45.82 and 37.64 points per game, respectively. They were the only teams to get through the regular season unscathed, and both enter with perfect 11-0 records.

“It’s obvious that these are the top two teams in the state,” Banks head coach Cole Linehan said.

The Braves, in fact, are on a 22-game winning streak entering Saturday, and they come to Hermiston with a squad that has surpassed what everyone thought it would, according to Linehan.

Everyone, that is, who isn’t in the Banks locker room.

“This team has exceeded expectations for everyone except for themselves,” Linehan said. “They’re a confident group of kids that have played a lot of good football and a lot of games.”

The expectations weren’t there for the Braves considering they graduated 11 seniors last spring, including their starting quarterback and running back.

Instead, they haven’t missed a beat. Banks has settled on a quarterback in Tanner Shook after Jarred Evans — the team’s No. 2 receiver — started the first two games under center.

“We had to replace our entire backfield and say goodbye to a lot of great athletes, but it’s been fun to see us reload,” Linehan said.

The Braves have two solid receivers in Evans and Jacob Slifka, a 6-foot-5 senior. Slifka has 1,029 yards receiving this season, and Evans has 896. The rest of the team has 619 yards receiving combined.

“They’re highly disciplined, well coached, and they got weapons,” McIlmoil said of the Braves. “They’re a well-balanced team. They can run the football, they can throw the football (and) they got some really good skill guys.”

McIlmoil said the Tigers will have to mix up their defensive coverage schemes as they develop a plan to slow down the Braves’ receiving corps.

The La Grande pass rush may be the key, though, as the coach hopes his defensive line can put pressure on Shook.

“It’s going to be more about speed against some of these guys and trying to get back there as fast as possible,” Woodworth said. “We’ve been throwing in some hand-fighting techniques.”

Blaine Shaw, a senior receiver and defensive back, will be one of the players responsible for trying to stop Slifka and Evans.

“They got a really big receiver. We’re going to just go up, play the hands and keep the ball away from them,” he said. “Our front seven can take care of the run, (and) in the secondary we gotta take care of those two.”

When the Tigers have the ball, Banks knows it’s going to have to stop the running game, led by Nathan Reed, who has 1,638 yards on the season.

But Linehan also knows the Tigers, though they only go to the air 17% of the time, are successful when they do, with Parker Robinson coming off a state semifinal performance where he threw three touchdowns.

“They want to run the football, (but) the quarterback can swing it,” Linehan said.

Banks brings a three-man front on the defensive line and has a linebacking crew that Linehan said, “flies around.”

Reed spoke similarly about what he’s seen of Banks’ defense on film.

“They got a really good linebacker corps when we’re on offense,” he said. “I think they have a pretty good pass defense.”

Both teams also possess strong offensive lines that their coaches praised, and both said the game likely will come down to the battle in the trenches.

“We’re going to go as far as our O-line and D-line take us,” Linehan said. “We return four of five starters on our line. We have an experienced group of guys who have been starting.”

McIlmoil said Banks appears to have a bit more size on the line but the Tigers have a speed advantage.

Senior defensive lineman Gabe Shukle agreed about the battle against Banks on the line.

“They have some studs up front. We just have to play our game and execute correctly,” he said.

McIlmoil said Banks has an edge in that it is the defending state champ and knows what to expect in the championship game, but  La Grande counters with a group of seniors he believes won’t be denied.

“We got 22 seniors that are die-hard football players. They’re willing to do whatever it takes to win,” he said.

Reed, one of those seniors, agreed, and said the team will need to rely on and remember the work it has put in to get to this point.

“We’ve put so much time into this sport, so much time into each other, and we’re not going to let that go to waste on Saturday,” he said. “I think we need to keep that in the back of our heads, how much time we put into this, and just go out there and play our game.”