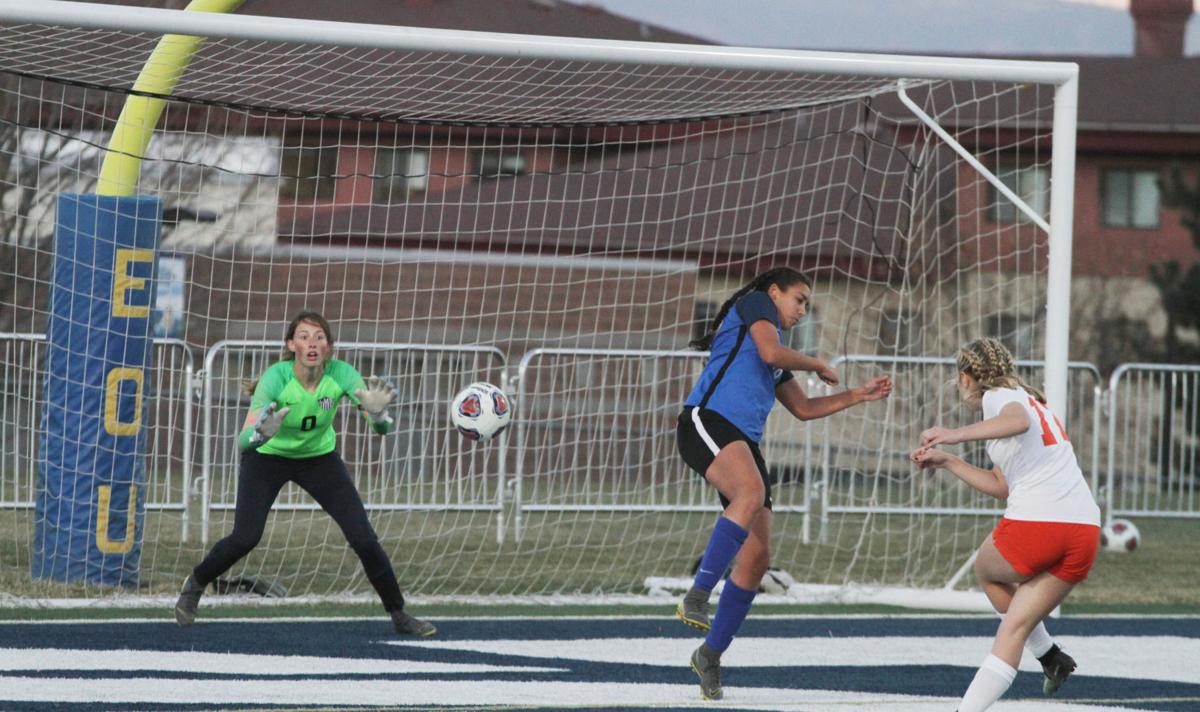 La Grande goalkeeper Alexyss Chamberlain, left, watches a shot from Molalla's Ashlee Albright come at her during the first half Tuesday. Chamberlain made eight saves in the Tigers' 3-1 win. 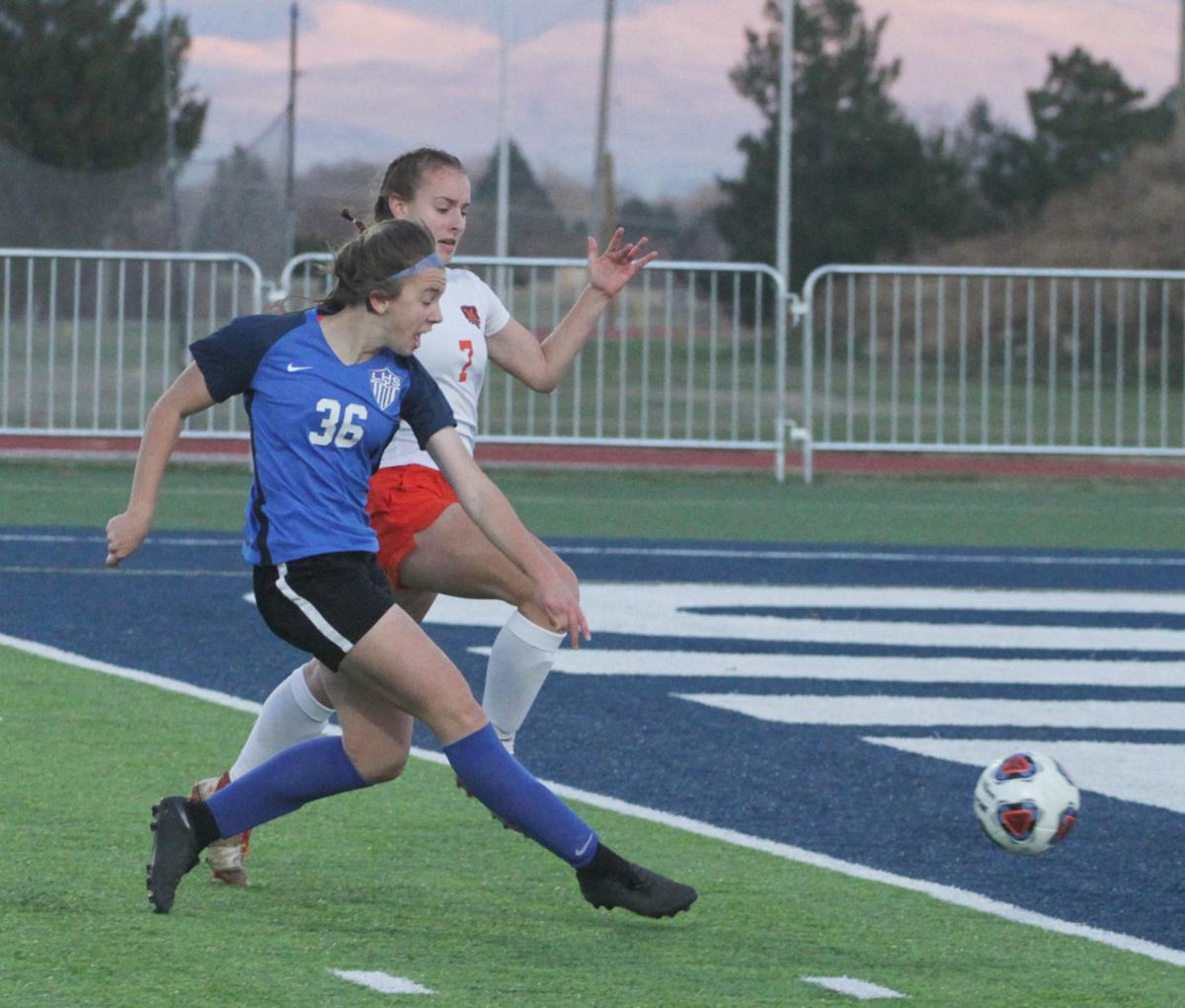 La Grande's Audrey Garlitz scores the first goal of Tuesday's playoff contest against Molalla. The Tigers won 3-1 behind a hat trick from Garlitz. 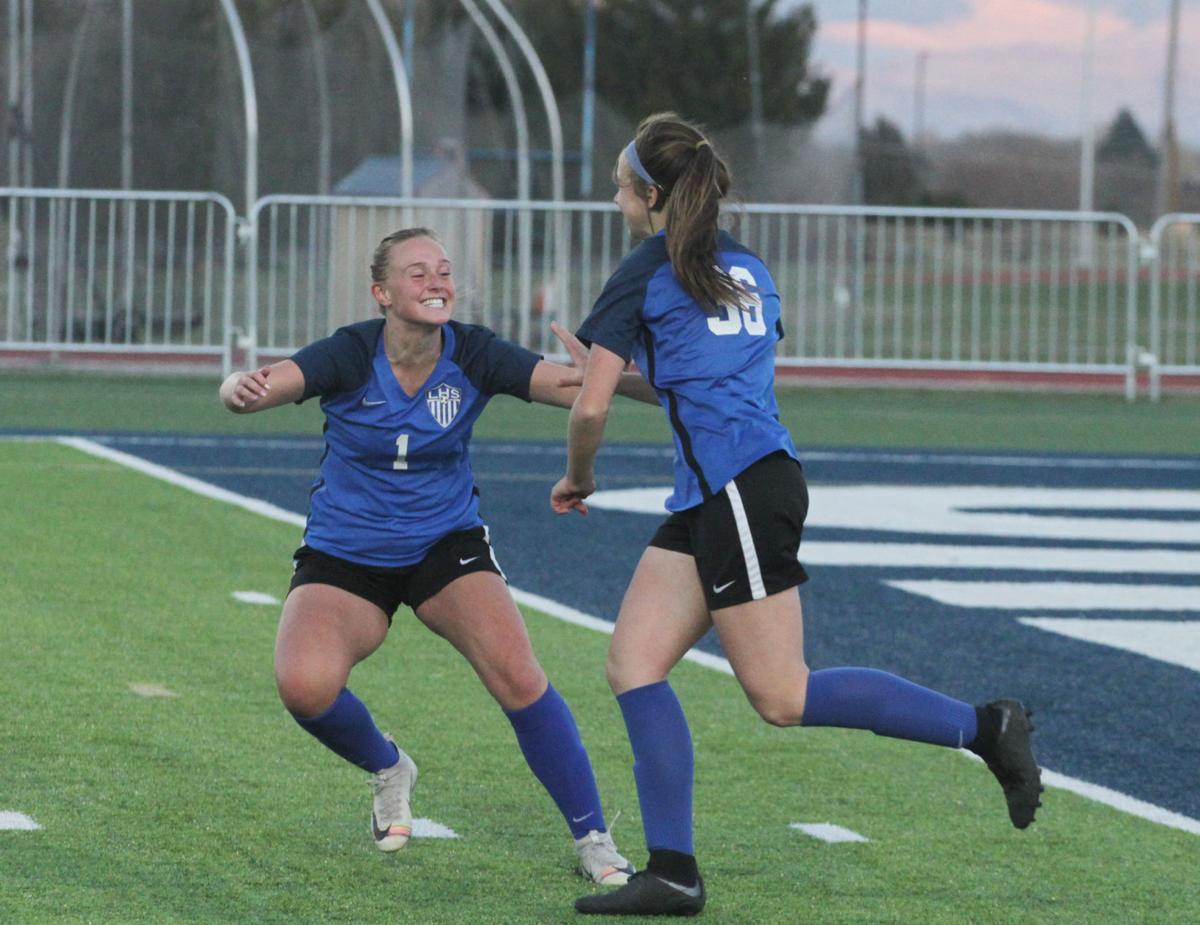 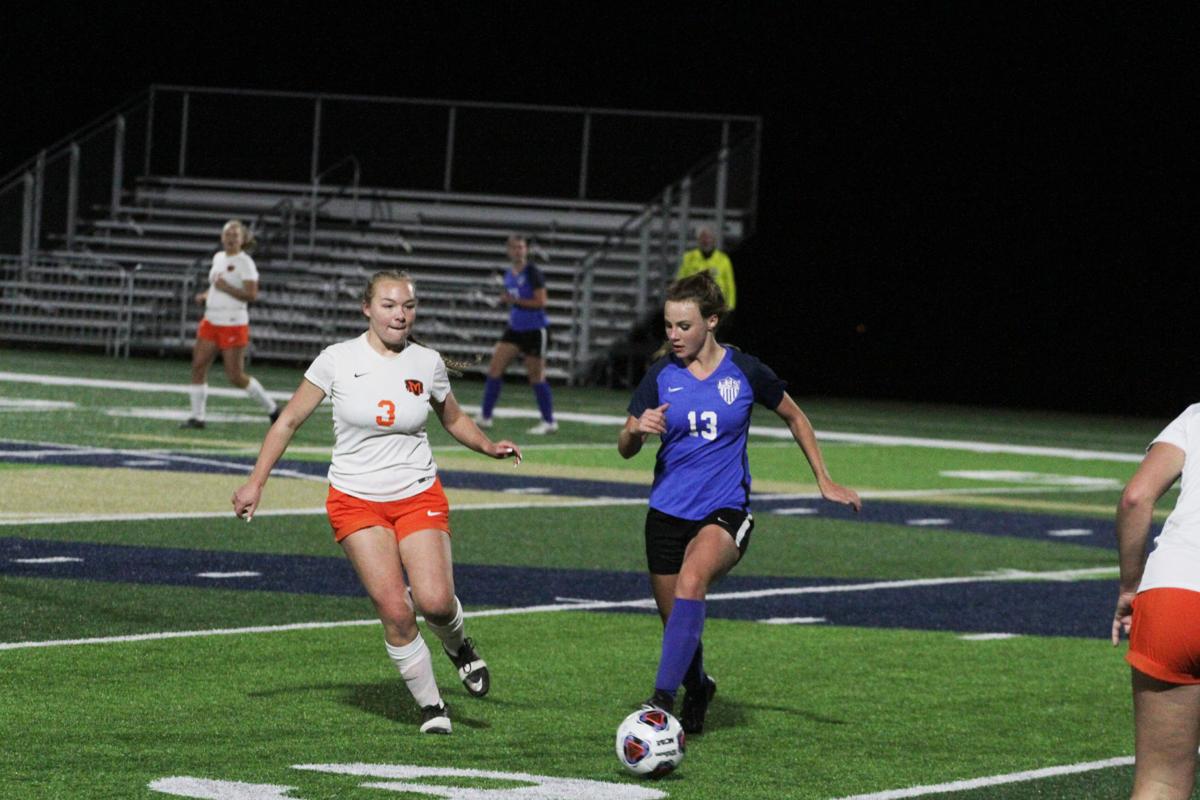 La Grande's Lindsay Adkins, right, looks to clear a ball in front of Molalla's Jaden Donaldson during the second half Tuesday.

La Grande's Audrey Garlitz scores the first goal of Tuesday's playoff contest against Molalla. The Tigers won 3-1 behind a hat trick from Garlitz.

La Grande's Lindsay Adkins, right, looks to clear a ball in front of Molalla's Jaden Donaldson during the second half Tuesday.

A hat trick from their leading scorer, a stellar second half from their goalkeeper and strong defensive play in general helped send the La Grande High School girls soccer team back to the state quarterfinals.

The Tigers didn’t even have to go to a shootout as they did in the past two years.

Audrey Garlitz scored three goals, Alexyss Chamberlain had five of her eight saves in the second half, and the Tigers topped the Molalla Indians, 3-1, Tuesday night in a first-round playoff match at Community Stadium.

“Super strong, super hard, super aggressive,” La Grande head coach Sam Brown said of his team’s play. “It was a dogfight for 80 minutes. It wasn’t pretty, but we’ll take it.”

Garlitz’s first-half goals — the sophomore scored after taking a crossing pass, dribbling in and connecting from 11 yards in the ninth minute, and off a rebound in the 32nd minute — gave La Grande all it needed on offense. Chamberlain and the rest of the La Grande defense made sure of that.

“Overall our center backs were solid. Our defense was solid,” Brown said. “Lexy came through and made some critical saves at critical moments.”

Most of Chamberlain’s second-half saves came with La Grande clinging precariously to a 2-1 lead. The senior turned away shots from Molalla’s Holly Rae, Madeline Lisac and Ashlee Albright in a four-minute span early in the second half and corralled a handful of other dangerous passes in the goalbox. She also stopped Albright from scoring midway through the second half, winning a race to a loose ball in the box and covering it before the Molalla forward could take a shot.

Chamberlain attributed the second-half effort to her frustration about the goal Molalla did manage in the first half. She had turned away a free kick by Molalla, but the ball bounced away from her and Albright scored what at the time was the tying goal in the 31st minute.

“I just got really mad about the entire goal, and then my anger I put out on the other team,” she said. “I said, ‘You’re not getting another goal.’”

La Grande immediately responded to the goal from Albright with Garlitz’s second to take the 2-1 lead into the half.

The Tigers also caught a break with about 19 minutes to play, when Albright scored what appeared to be the game-tying goal, only to have it waved off by an offsides call.

Garlitz put the game away by completing her hat trick with 9:45 to play.

“They were tough. They never gave up,” Garlitz said of Molalla. “I like that about them, giving us a challenge. (Our) team did really good. We did not give up. We kept going, and we were really strong in the second half.”

The Tigers faced pressure from the Indians’ offensive attack most of the night. La Grande took more shots — holding a 17-12 edge — but Molalla held the possession longer and kept the ball in its attacking third of the field.

The Indians, though, had a tough time breaking through against the La Grande back line, and what did get through was turned away by Chamberlain.

“We really had to work on playing confidently because we aren’t used to teams pressuring us this hard, so it was a real shift in thinking with them all over us all the time,” senior defender Lara Insko said.

Garlitz praised the effort the defense put on to keep the Tigers ahead.

“I gotta say good job to the defense. It was so tough back there,” she said. “I’m proud of them for keeping it up, and Lexy (saved) so many goals.”

“She was our savior. They had one really strong player in the center (Albright) who had many goal scoring opportunities, and Lexy has no fear,” Insko said. “She’s willing to come out and tackle those girls. She did a great job tonight.”

The win, La Grande’s third in a row in the first round, sends the Tigers into a quarterfinal match at North Valley Saturday afternoon in Grants Pass.

“I think we can do it,” Chamberlain said of the upcoming match. “If we play the way we played (today), we have a chance.”