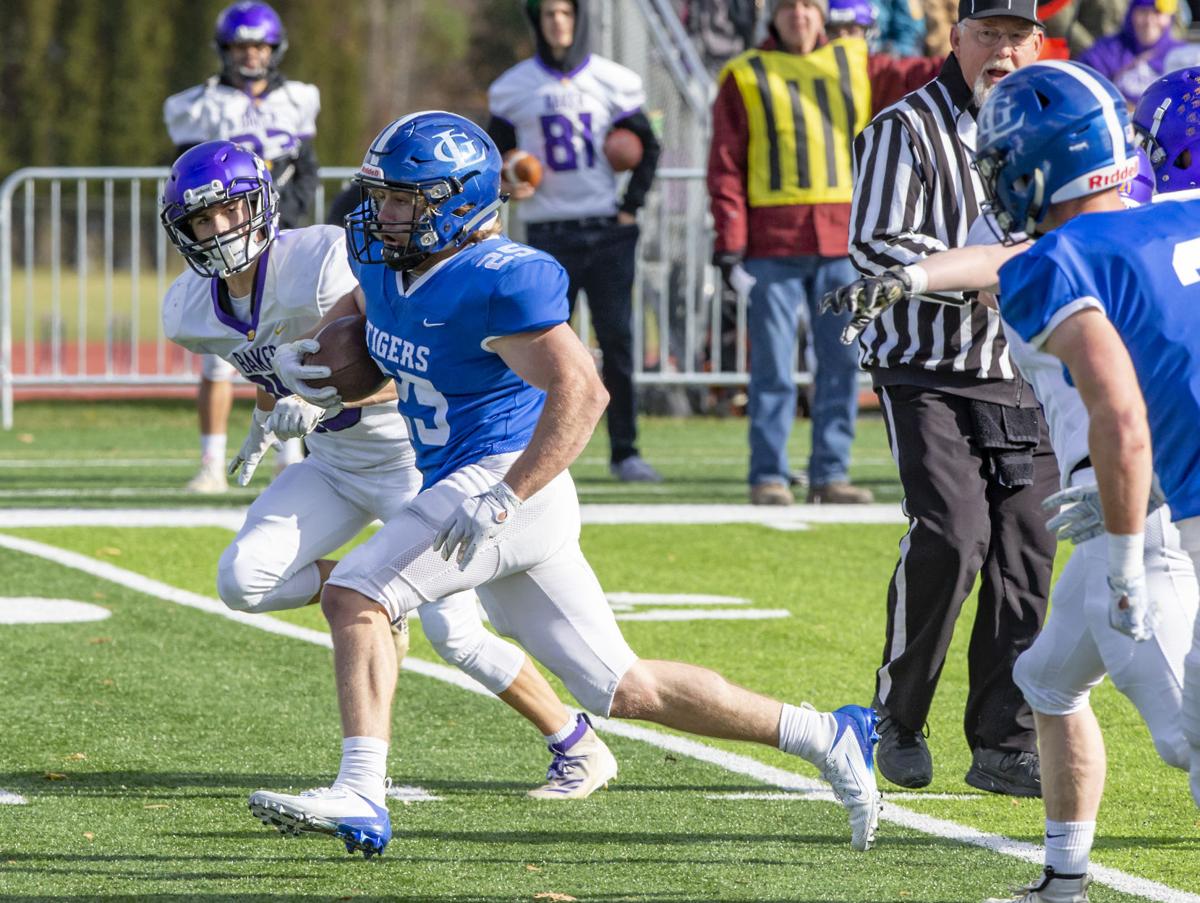 La Grande running back Nathan Reed (25) breaks free of the Baker defense to run for a touchdown during the third quarter. The La Grande Tigers defeated the Baker Bulldogs 34-0 at Eastern Oregon University in La Grande Saturday afternoon. 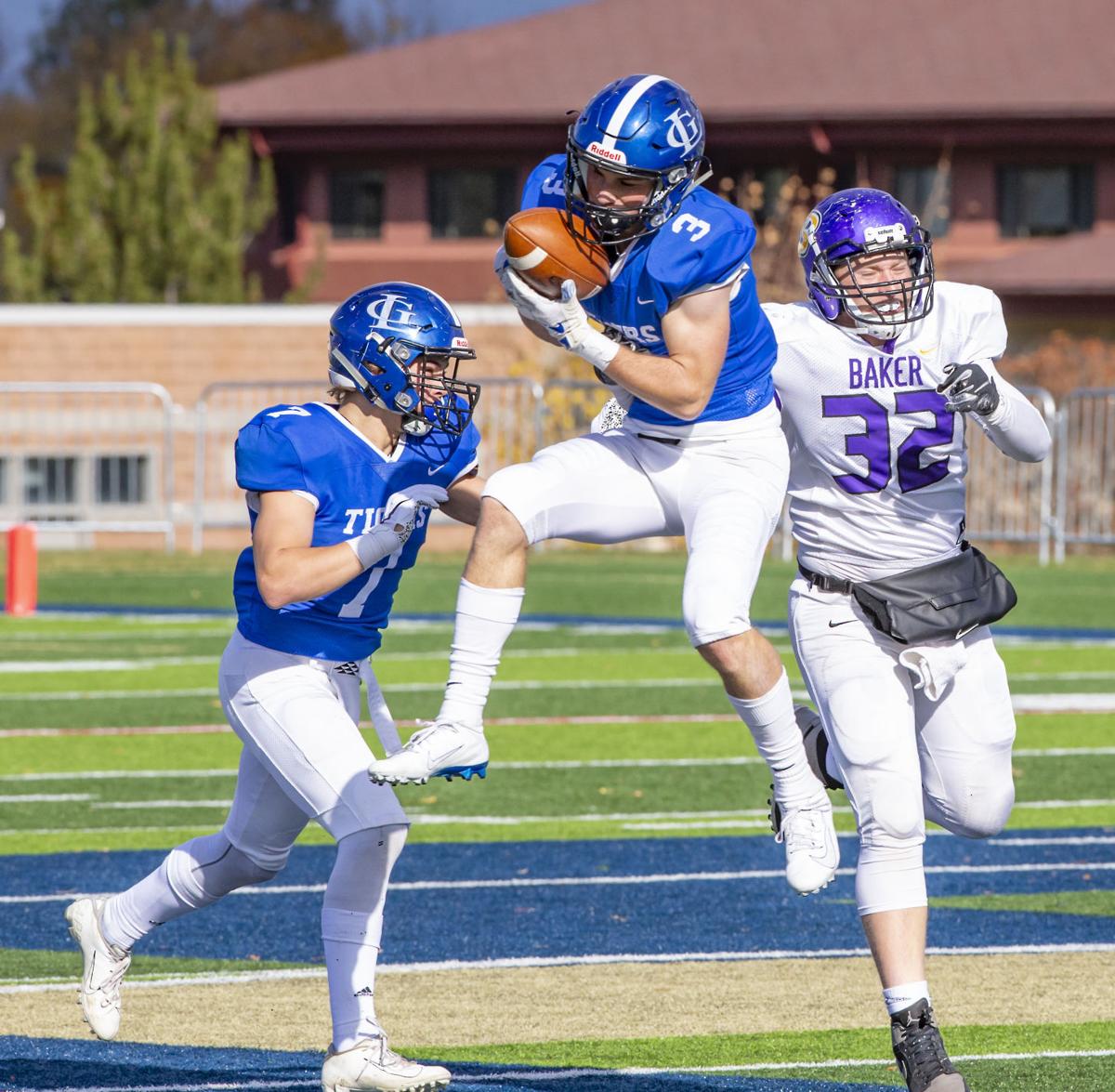 La Grande running back Nathan Reed (25) breaks free of the Baker defense to run for a touchdown during the third quarter. The La Grande Tigers defeated the Baker Bulldogs 34-0 at Eastern Oregon University in La Grande Saturday afternoon.

La Grande’s defense held stout until the offense was able to break through.

Once it did, the floodgates opened, and the Tigers reached one of their goals — an undefeated regular season. Much more, though, lies ahead for La Grande.

“The boys have had a lot of goals from the beginning, and they’ve worked hard to do that. They’ve put a lot of time and energy into football, and this is what they’ve wanted,” head coach Rich McIlmoil said. “They deserve all the credit. We probably had our best week of practice this week. All their hard work and accomplishing those goals is coming out.”

Nathan Reed rushed for 114 yards and three touchdowns, Parker Robinson and Blaine Shaw also scored, and the Tigers locked up the Greater Oregon League title outright with a 34-0 home win over the Baker Bulldogs Saturday afternoon at Community Stadium.

“We’ve been working really hard all week,” Reed, who eclipsed 1,000 yards rushing for the season in the win, said. “We worked on scheming things differently (and) blocking things differently. We played a lot harder. We had a great week of practice and we came out and executed.”

La Grande scored on its second offensive play of the game — a 15-yard run by Reed — but then was held in check by Baker’s defense most of the first half.

“Sometimes one of our weak links (is) that we start a little slow, and then we gotta get it rolling later in the game,” McIlmoil said.

But two big plays late in the half led to two touchdowns and what felt like an insurmountable lead for La Grande going into the half.

Reed — who had been held to short gains on his previous four carries — broke through the line on fourth and five for a 39-yard touchdown and a 14-0 lead with 2:12 to play in the half.

Shaw then grabbed an interception — his second of the game — and scored four plays later on a 10-yard reception to make the margin 21-0 at the break and La Grande, indeed, was rolling.

“We just started wearing them down,” Reed said. “They’re a pretty confident team, and you could see as the game progressed they started losing confidence. They weren’t flowing as well to the ball, and we kept getting better and better.”

The outburst of offense capped a half in which neither team was able to do much. La Grande had just 98 yards of offense — 88 of it on the ground, and 82 of that from Reed. Baker struggled even more, gaining just 88 yards, and getting 60 of that through the air.

“The defense really stepped up today, and we showed it on the scoreboard putting up the zero,” Shaw said.

La Grande’s rushing attack finally took off in the second half — particularly in the fourth quarter — to put the game on ice. Reed and Robinson scored on runs of 5 and 25 yards, respectively, five minutes apart for the final margin. Robinson had 97 of his 98 yards rushing after the break, which offset an afternoon that saw him throw for just 37 yards on four completions.

Baker never did get its offense going in the second half, finishing with just 139 total yards.

“Our defense (has) been working really hard, not just the last week but the last two weeks,” McIlmoil said. “There are a couple things that coach Walcott wanted to tighten up, and he’s been doing a phenomenal job all year. There are a few changes that he made, and those changes paid off.”

Spencer Shirtcliff had 102 of those yards through the air for Baker. However, the quarterback was just 8-for-23 passing and was picked off twice. The Tigers also held running back Gauge Bloomer in check, as he rushed the ball 19 times for just 38 yards. Riley Flanagan had three catches for 58 yards.

“Offensively we just couldn’t get anything going,” Baker head coach Jason Ramos said. “We struggled. We had opportunities, but we made too many mistakes, costly penalties, interceptions, turnovers.”

The Tigers (8-0 overall, 4-0 GOL) await the completion of next weekend’s state play-in games to see who they play first. The Tigers finished No. 3 in the OSAA rankings, meaning they achieved another one of their goals — the ability to host two playoff games if they win in the first round.

“We wanted two home playoff games,” Reed said. “We wanted to do the best we could do to get that, and that’s what we did.”