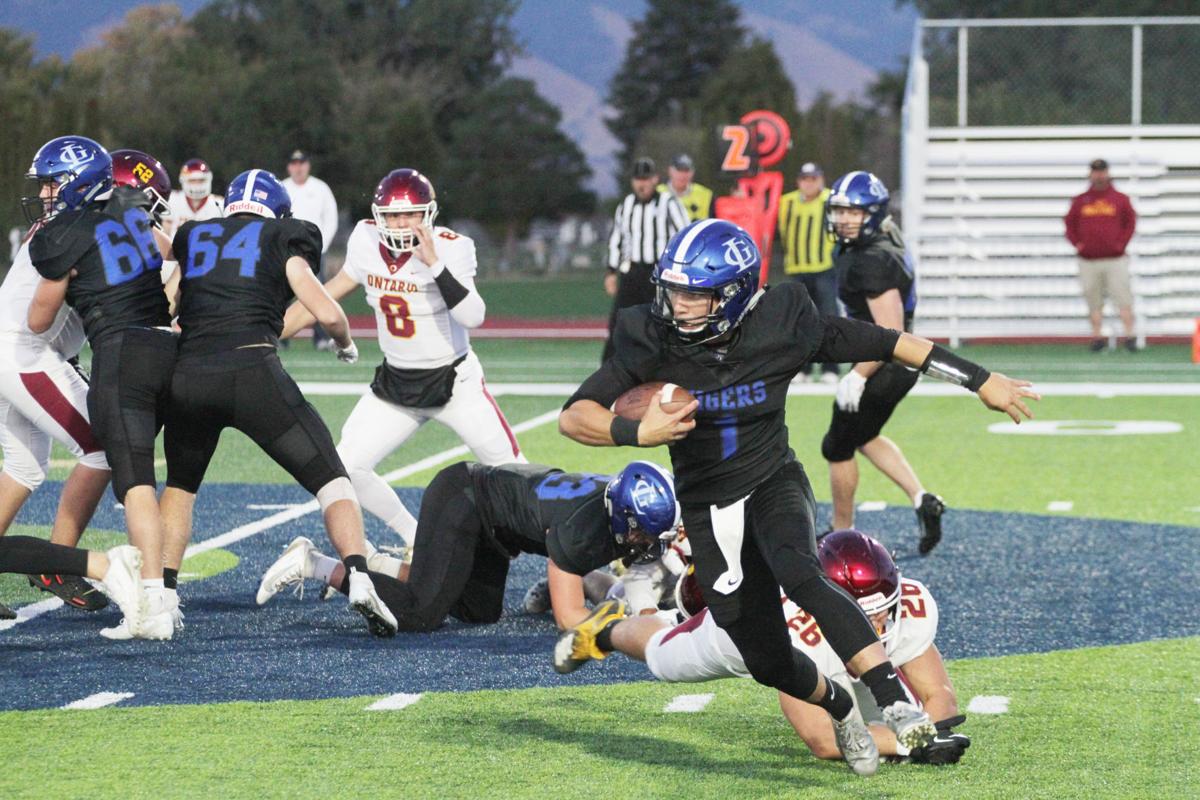 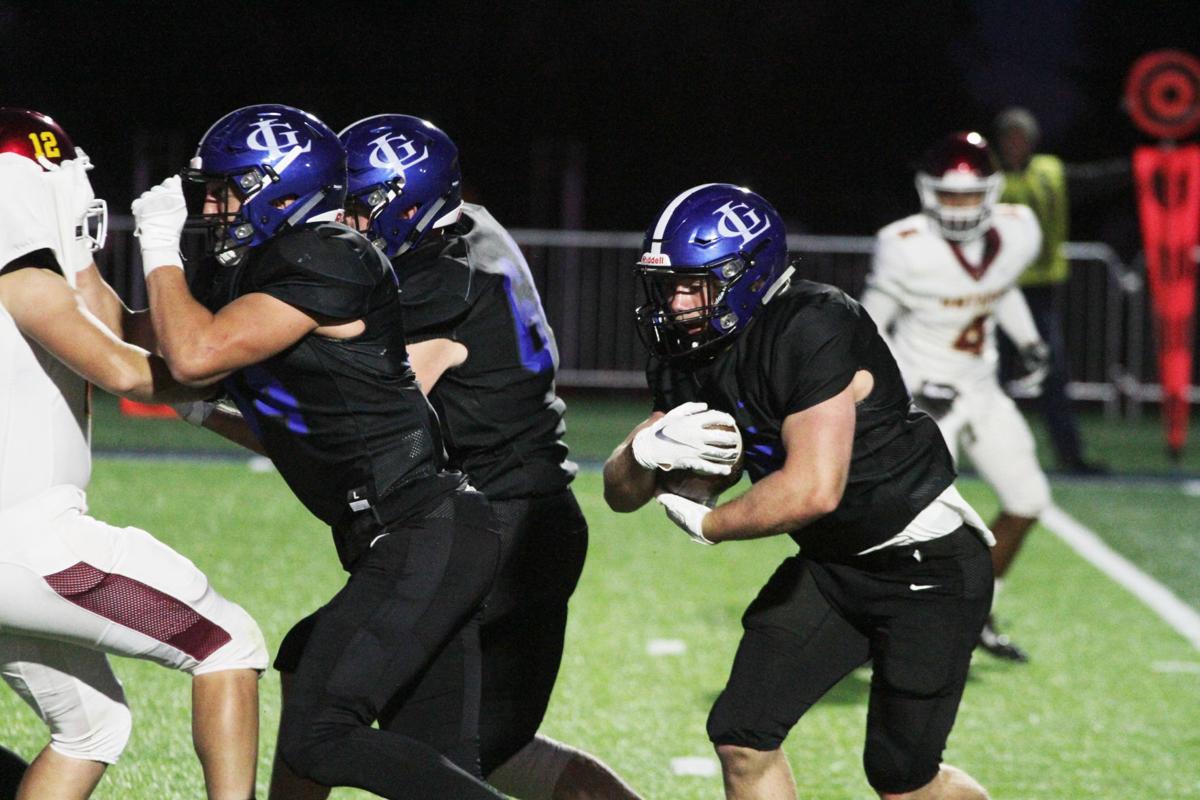 Nathan Reed, right, follows the blocking of the La Grande offensive line in for one of his three touchdowns during the Tigers’ win over Ontario Friday. 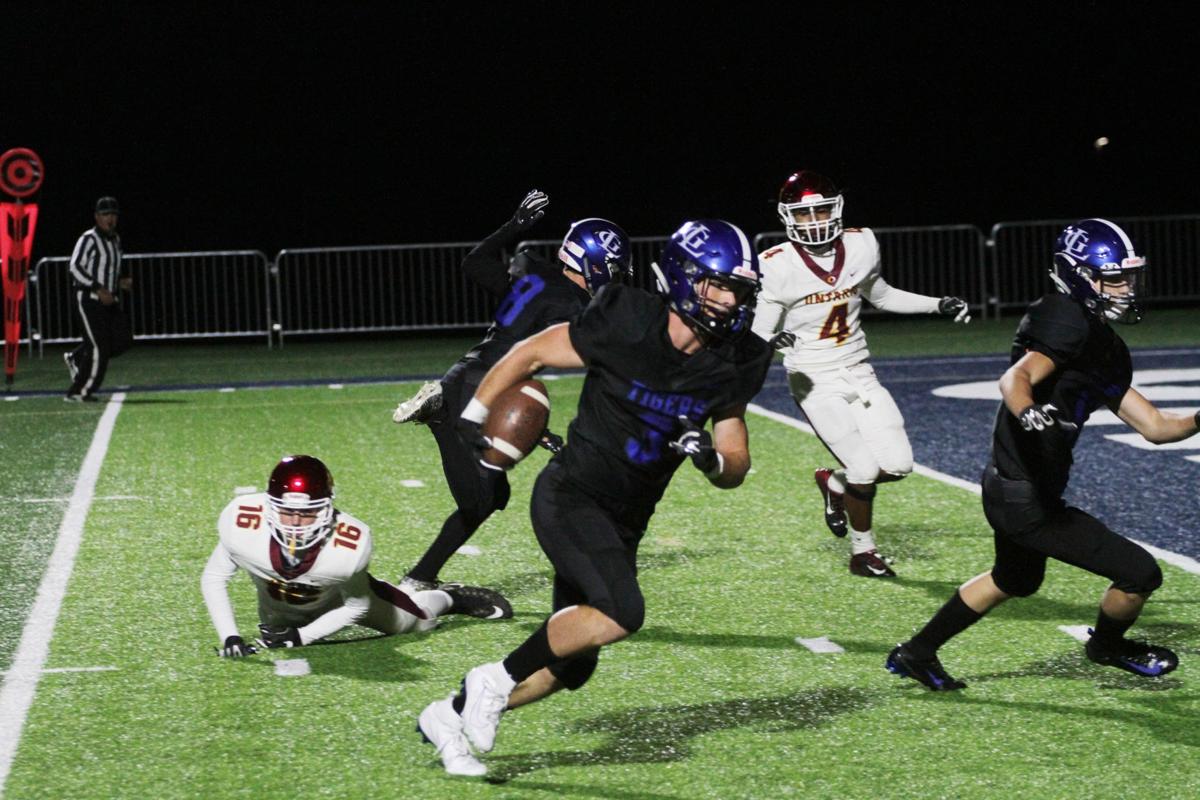 La Grande's Blaine Shaw, center, heads to the endzone for one of his three touchdowns in Friday's win.

Nathan Reed, right, follows the blocking of the La Grande offensive line in for one of his three touchdowns during the Tigers’ win over Ontario Friday.

La Grande's Blaine Shaw, center, heads to the endzone for one of his three touchdowns in Friday's win.

Nathan Reed rushed for three touchdowns, Parker Robinson threw three TD passes to Blaine Shaw and also ran for a score, and La Grande scored the game’s first 42 points on the way to a 56-6 thumping of Ontario at Community Stadium.

“I could tell we weren’t mentally focused. I think we were a little distracted by our black uniform thing,” McIlmoil said, referring to La Grande debuting new black uniforms. “(It was) a little kick in the pants to say, ‘Get going or we could be in trouble.’”

La Grande did punt on that opening drive, but after that, the only team in trouble was Ontario. La Grande did essentially whatever it wanted on the offensive end — through the air or on the ground — and scored on six straight possessions to take a 42-0 halftime lead.

“There’s not a lot of high school teams that can run it and pass it as well as we can,” said Reed, who finished with 126 yards on just eight carries. “Usually you have just one of the two. We’re so deadly at running or passing. We just keep teams on our toes and we’re super effective.”

The Tigers were in quick-strike mode on Friday, too. Each first-half scoring possession was five plays or less, aided in part by excellent field position due to either a poor Ontario punt or a good punt return by Justin Frederick.

Reed capped the first two scoring drives — of five and three plays, respectively — with runs of 7 and 18 yards, and Robinson found Shaw for a 26-yard TD pass on the first play of the second quarter for a 20-0 lead.

“We’ve got so many different weapons on offense. We run the ball, and then that opens up the passing game for everyone. And then we throw the ball, and that takes guys out of the box and the running game opens wide up,” said Shaw, who finished with 101 yards receiving.

Even when La Grande had to march a considerable distance, it still scored quickly. Reed capped a three-play, 78-yard drive with a 59-yard scoring run as he weaved through the Ontario defense, and Robinson went 75 yards — bulling over defensive back Chaney Larson along the way — three minutes later for a 34-0 advantage.

Robinson joined Reed in going over 100 yards on the ground, as the quarterback finished with 103 yards on eight carries. He was also 8-for-17 passing for 139 yards.

McIlmoil gave the LHS offensive line credit for opening up holes in the Ontario defense for the La Grande rushing attack, which finished with 259 yards on only 32 carries.

“Our line is playing really well right now. When they really get after it, they’re hard to stop,” the coach said.

Offensive lineman Spencer Gerst added that the offense is only getting better, too.

“Offensively we’re just starting to get momentum. We’re learning new things, finally getting our plays and our offense down,” he said. “We’re trying to make sure we get good holes up front and get a good push.”

The defense, not to be outdone, collected six more turnovers, causing Ontario quarterback Kenji Teramua to fumble twice and throw two interceptions — one of which Braden Carson took 50 yards for a touchdown and a 49-6 lead late in the third quarter. Ruben Hernandez was also picked off twice.

“Coach (Matt) Wolcott is phenomenal,” McIlmoil said of the LHS defensive coordinator. “The boys are buying into what he’s doing. He is the glue that is keeping that defense together. They’re really starting to figure out how to read the ball, make adjustments and make plays when we need to.”

Teramua did throw for 207 yards and a 99-yard touchdown to Brandon Rodriguez for Ontario.