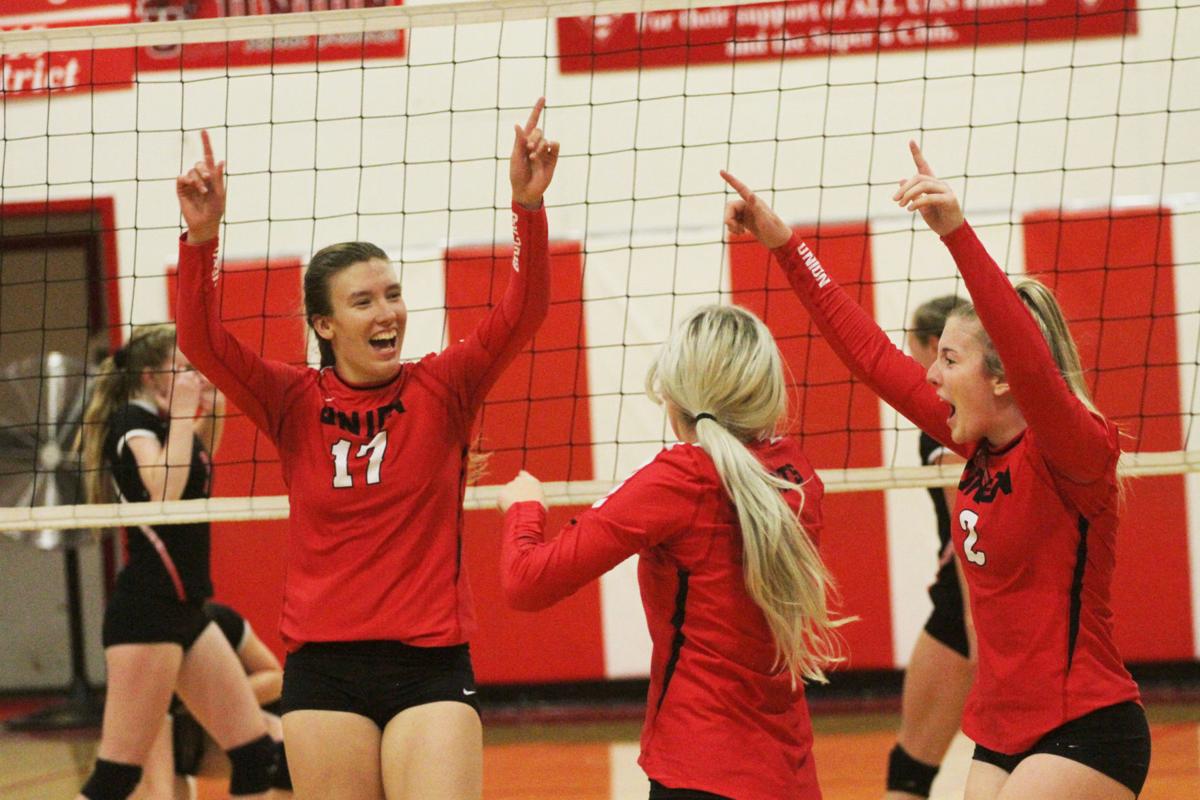 Union’s Ahnica Shoemaker, left, Callie Glenn, center, and Taylar Daggett celebrate after a point during the Bobcats’ match against Weston-McEwen Thursday. The Bobcats topped the TigerScots in four sets. 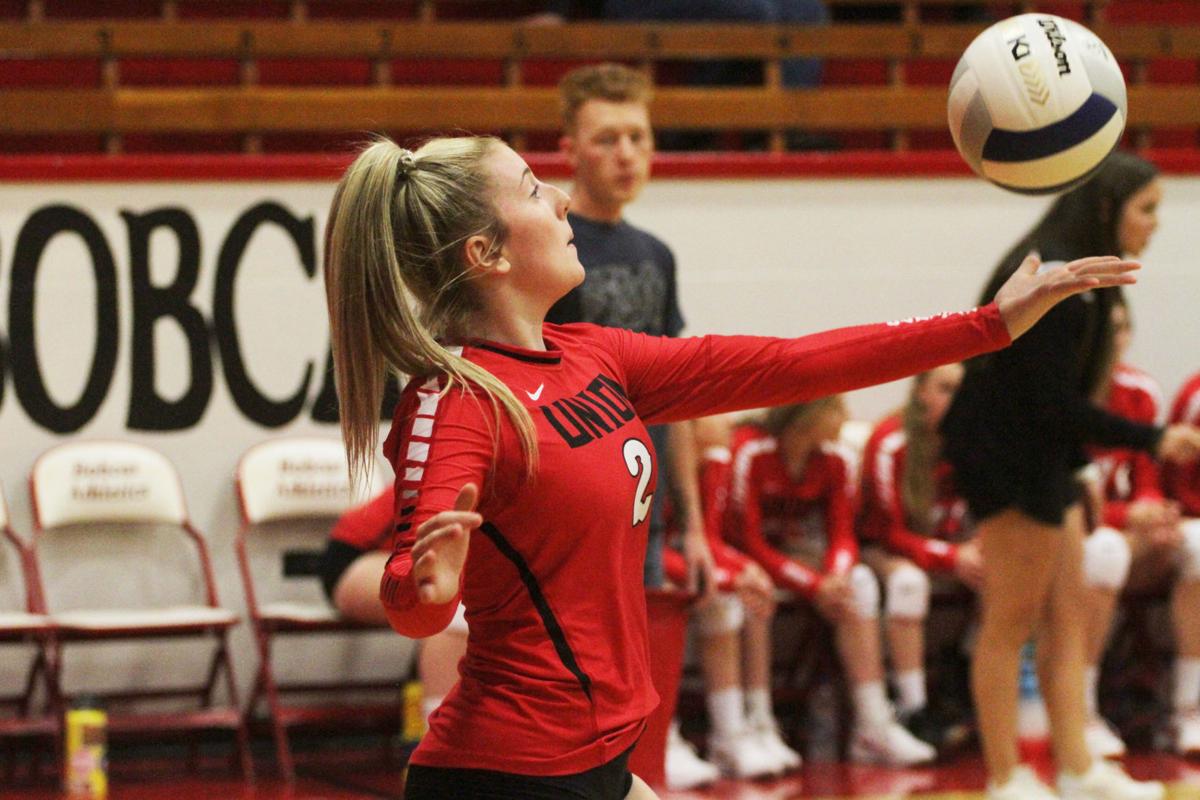 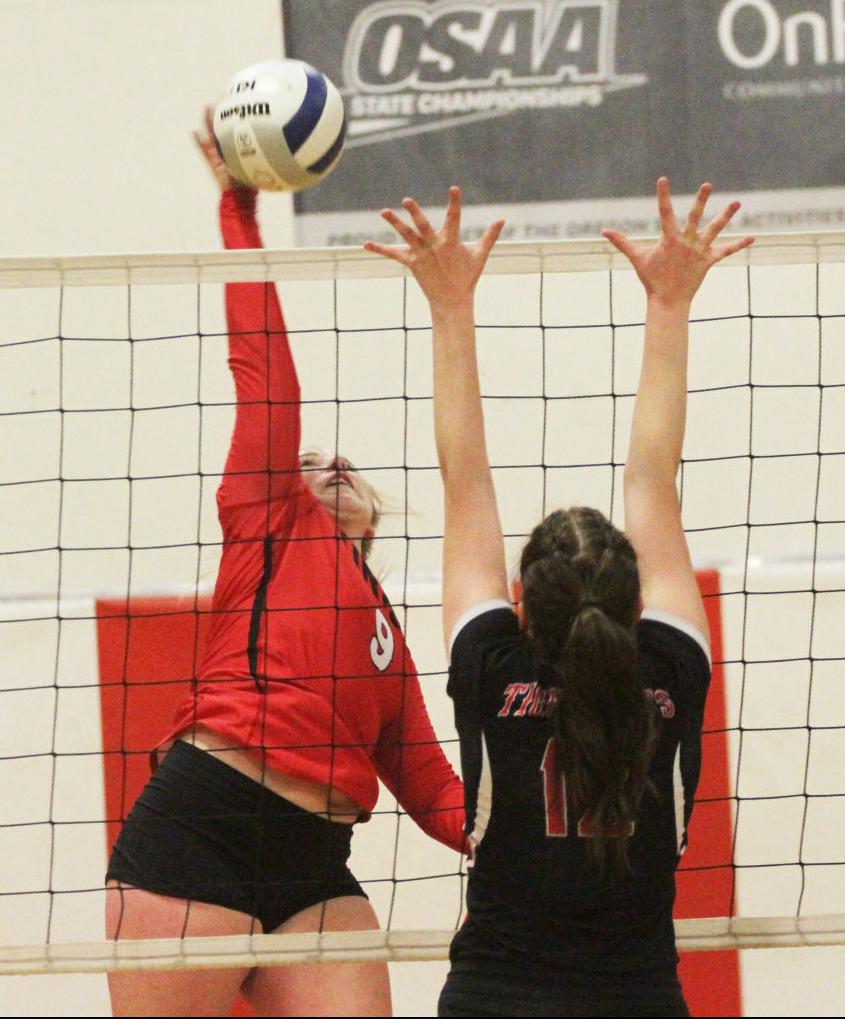 Union’s Kylie Marriott, left, had 13 kills and 16 digs in the Bobcats’ win Thursday. 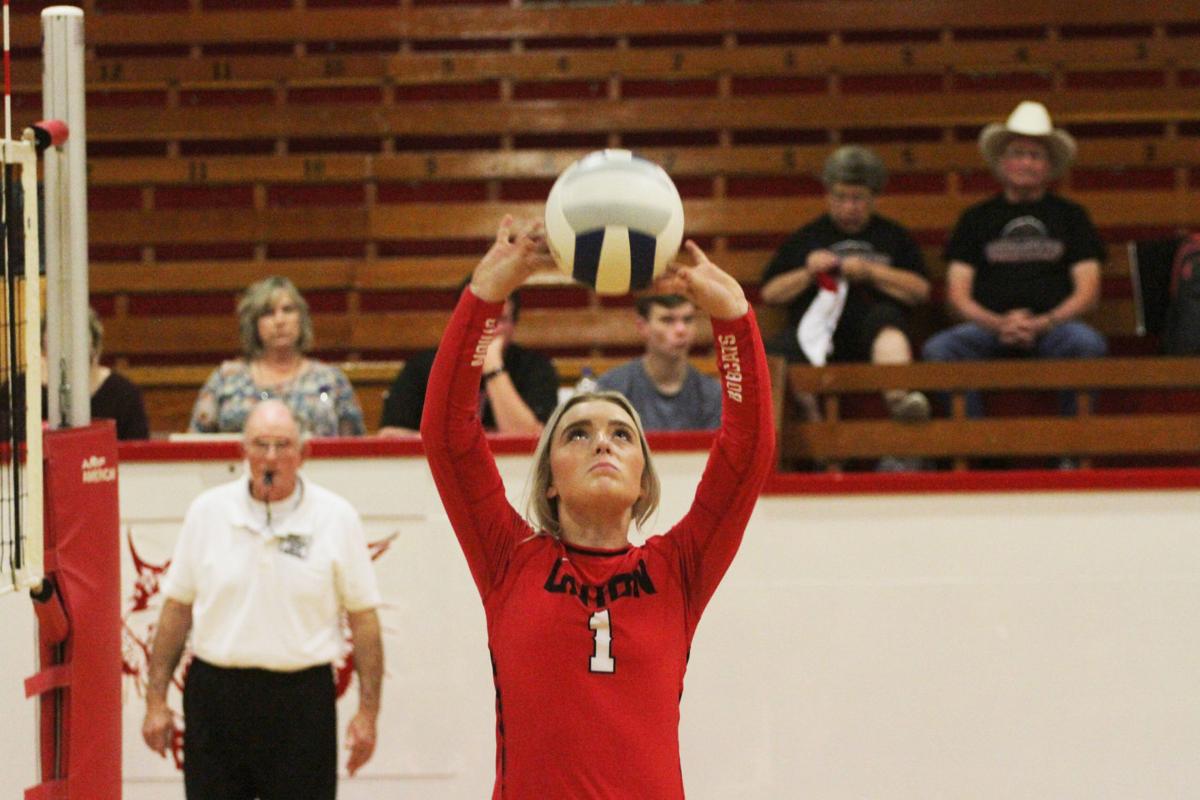 Union's Callie Glenn sets the ball for a teammate during the second set Thursday night against Weston-McEwen. 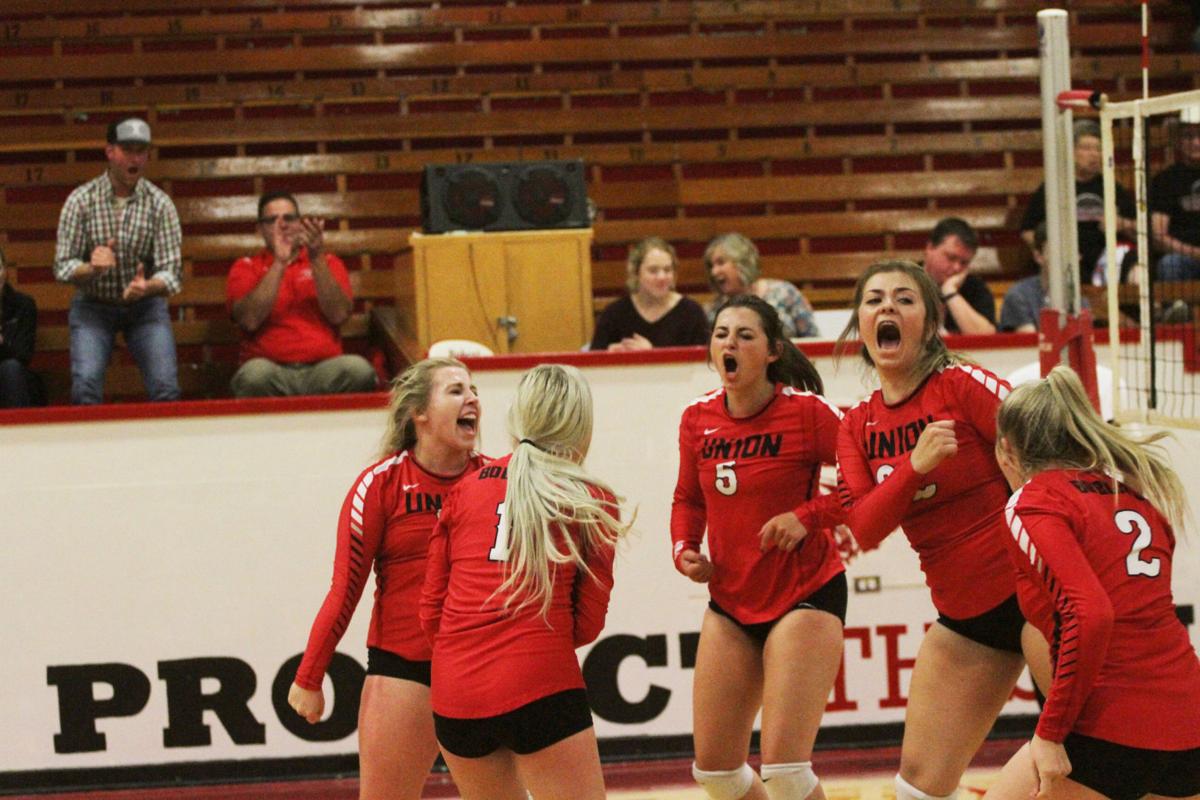 The Union volleyball team celebrates after a point later in the third set of Thursday's match against Weston-McEwen. 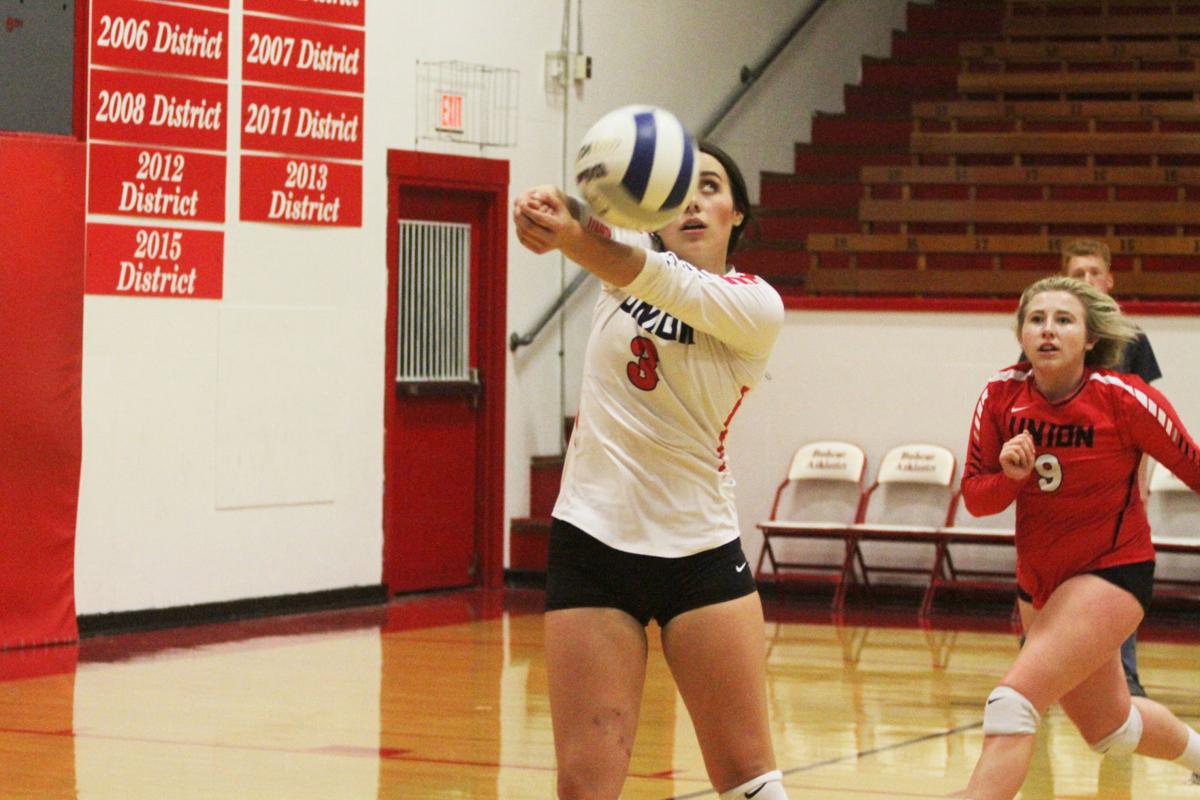 Union’s Ahnica Shoemaker, left, Callie Glenn, center, and Taylar Daggett celebrate after a point during the Bobcats’ match against Weston-McEwen Thursday. The Bobcats topped the TigerScots in four sets.

Union’s Kylie Marriott, left, had 13 kills and 16 digs in the Bobcats’ win Thursday.

Union's Callie Glenn sets the ball for a teammate during the second set Thursday night against Weston-McEwen.

The Union volleyball team celebrates after a point later in the third set of Thursday's match against Weston-McEwen.

UNION — An early showdown between teams that entered the night in the top five of the OSAA rankings lived up to its billing.

But more consistent play by the Union Bobcats led to them taking the win Thursday and moving into first place in the Blue Mountain Conference.

“Definitely the best match we’ve played all year and that’s what we practiced for,” Union head coach Karly Knapp said. “They put it all together on the right night.”

The match featured solid, gritty defense on both sides of the net, and especially early on it was tough for either team to get a kill. Long rallies and impressive digging defined much of the match.

“A lot of what we were doing was going for everything at that point,” Knapp said. “The ball is moving fast, long rallies, you might as well go for everything and not let the ball hit the ground.”

Union, which showed perhaps the most balance on offense it has all season, jumped out to an early advantage. The Bobcats scored the final seven points of the opening set, then ended the second set on a similar run — this one of six straight points — to seemingly take control of the match.

“On the offensive side we’ve been really trying to have balance because it’s hard to have one hitter only. If you have that, then the other team knows who they are going to put their defense on,” said Union’s Ahnica Shoemaker, who added six kills and five blocks.

The TigerScots, though, showed toughness to get back in the match. Weston-McEwen twice jumped ahead to five-point leads in the third set, once at 12-7 on a kill by Ellie Scheibner and later at 19-14 on a Carrie Hazen ace.

Union scored the next six points, taking a 20-19 lead on an ace by Marriott and going ahead 24-22 on a Sydney Antoine kill.

The TigerScots managed to make an impressive save on a kill attempt on match point, which Union eventually put out of bounds, then later took a 26-25 lead on a block by Cloe Davis and Scheibner. They scored the next point on a Union error to force a fourth set.

“For whatever reason with this team, we’ve won almost every two-point set we’ve been in all year,” TigerScots’ head coach Shawn White said. “And we’ve been in a lot of them.”

Weston-McEwen rode that momentum to an 11-6 lead in the fourth before Union took it back, a result, White said, of his team’s struggles with consistency Thursday.

“We had momentum and (the lack of) execution just stepped up and bit us,” he said. “If we’re going to beat a good team like that, we gotta be more consistent.”

Union used a 7-1 run — one that saw Shoemaker tally three kills — to tie the set, then took the lead for good on back-to-back kills by Daggett and Callie Glenn, which started a match-ending 11-2 run. Marriott had three kills to help close the match, including dropping one on the sideline for the winner.

“I definitely knew that we had to come out on top of (our game), be super confident and play every play to the fullest,” Marriott said.

“Callie, our setter, was just able to move the ball around a little more tonight,” Knapp said.

Jesse Manning, who had 18 digs, seven kills and two aces for the TigerScots, said the team played well in spite of the outcome.

“We pushed really hard and did everything we could,” she said. “I feel like we just weren’t focusing, and we really needed to get our focus back.”

Davis led Weston-McEwen with eight kills and added 10 blocks. Trinity Hearn and Kendra Zink had six kills each. Emma Olson led the back row with 21 digs, Charli King had 13 assists, and Scheibner had 12 assists.