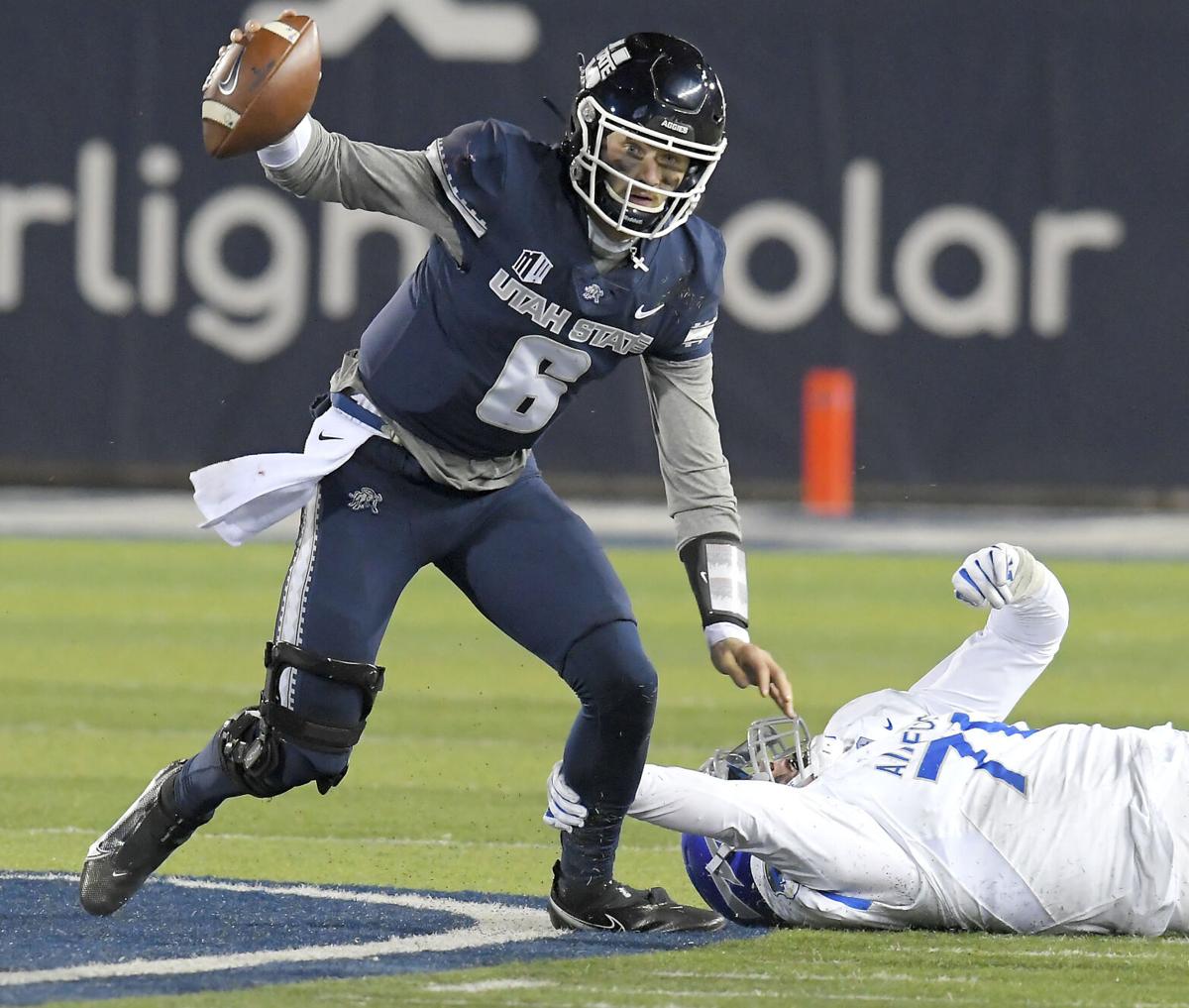 Utah State quarterback Andrew Peasley (6) scrambles away from Air Force defensive tackle George Silvanic (78) during the first half of an NCAA college football game Thursday, Dec. 3, 2020, in Logan, Utah. Peasley is a 2018 graduate from La Grande High School and was a standout on the Tiger’s football team. 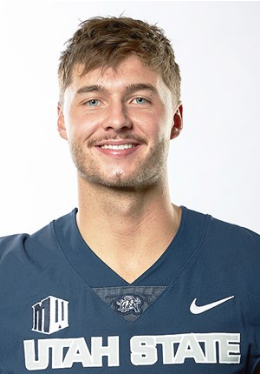 Peasley, formerly a standout quarterback at La Grande High School, is now starting under center for the Utah State Aggies. Peasley led the Aggies to their first win of the 2020 season on Nov. 26, 2020, with a four-touchdown performance.

LOGAN, Utah — La Grande High School standout Andrew Peasley made his first start under center for the Utah State University Aggies in late November, and the former Tiger showed up in a big way on the big stage.

Peasley had the kind of day any dual-threat quarterback dreams of, racking up three scores through the air and a fourth on his feet. Leading the Aggies to their first win of the season, Peasley completed 14 of 21 passing attempts for 239 yards and added another 118 yards on 11 carries.

“I’ve been a backup for two years, and to finally get an opportunity to go out and play was rewarding,” Peasley said. “It was more rewarding for the team to get that first W this year.”

Utah State, hindered by a diminished coaching staff due to the COVID-19 pandemic, rode a wave of offensive momentum to a 41-27 victory over the New Mexico Lobos.

Peasley said his team felt some momentum heading into the week after finding elusive that first win.

“I feel like us as an offense, you know, we showed that we can actually put up points, and the team really liked getting that W and that feeling (of winning). I think we’ll continue to strive for that,” he said.

That momentum wasn’t enough to overcome a stout Air Force Falcons defensive outing, though. The Aggies lost their matchup against the military academy on Thursday, Dec. 3, falling 35-7. Peasley threw for one touchdown and two interceptions and led the Utah State rushing attack with 53 yards on the ground.

Peasley entered the spotlight during a year in which football, like most things, has been upended by the COVID-19 pandemic. He played his first start against the Lobos in front of a minimal crowd, and the Aggies already had to cancel a matchup against the University of Wyoming Cowboys due to the virus.

“We didn’t have any fans besides our family last game,” Peasley said. “You know, it really just comes down to playing football, right? There’s no adrenaline to the fan base.... We’ve gotta do three tests a week for COVID, each week there’s probably gonna be someone out. We had three total coaches last week, I think, on offense. So that was interesting, but we made it work.”

Peasley, who graduated from La Grande High School in 2018, stepped in for the Aggies after the team dismissed previous starting quarterback Jason Shelley for violating an unspecified team rule.

While Peasey’s early success may not have been matched in his second start, the La Grande native certainly has achieved a degree of stardom. He was one of eight collegiate quarterbacks that week named as a Manning Star of the Week.

“I had multiple people text me, call me after the game, that I usually never talk to, and they’re congratulating me,” Peasley said. “So it just shows that a town like La Grande, you know, they really support me, and I’m very, very thankful and blessed to be from that town and to have a fan base there.”

Hansen's Sunday Notebook: NFL experience should give Wildcats an edge over Pac-12 foes