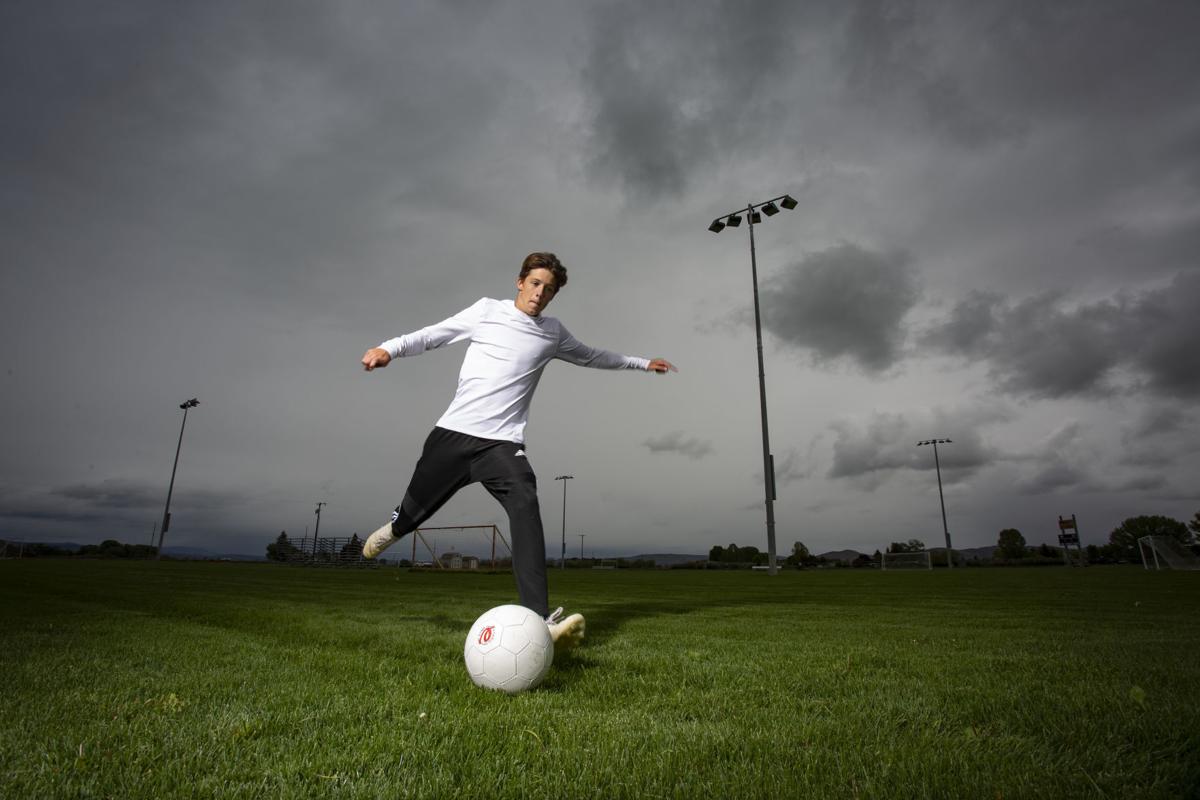 Baker High School Senior Brylan Robb kicks a soccer ball Thursday morning while shooting on goal at a soccer field in Baker City. The three-sport athlete is spending his lost season working and kicking around the soccer ball. 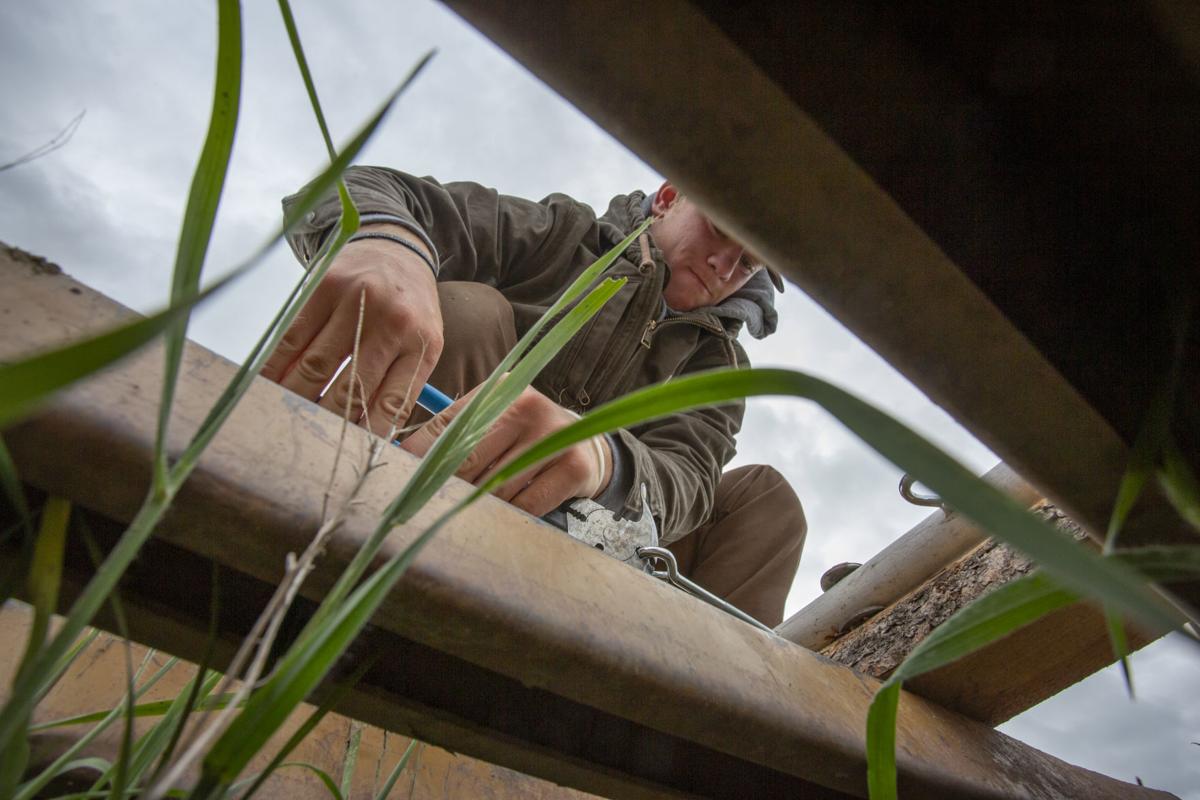 Spencer Shirtcliff tightens an eyebolt while installing an electric fence on a cattle guard Thursday morning while working as a ranch hand near North Powder.

Baker High School Senior Brylan Robb kicks a soccer ball Thursday morning while shooting on goal at a soccer field in Baker City. The three-sport athlete is spending his lost season working and kicking around the soccer ball.

Spencer Shirtcliff tightens an eyebolt while installing an electric fence on a cattle guard Thursday morning while working as a ranch hand near North Powder.

This is part three of a three-part series looking at how northeast Oregon student-athletes — from Umatilla, Union, Wallowa and Baker counties — are dealing with seeing their spring season lost to the coronavirus.

BAKER CITY — Three years after he made his way to track and field at Baker High School, senior Brylan Robb found his athletic niche.

After head coach Suzy Cole placed him in hurdles, his passion for these events slowly grew.

“Sophomore year I decided that I liked (hurdles), and I would say last year everything started clicking for me,” Robb said.

During his junior season, Robb began to shine more in his events. Remarkably so, Cole was able to see the passion for his craft grow.

“He really started falling in love with it last year and had worked really hard during the summer and the winter months trying to get ready for a great season,” Cole said.

Going into his senior year, competing in college became more realistic for Robb. Already accepted academically to Western Oregon University to pursue a criminal justice degree, Cole was hoping that a strong season could spark a conversation of competing on the next level for her student-athlete.

“He’s a young athlete that was really starting to come on, this was a year we were really hoping to get him stronger marks,” Cole said.

That all changed when the Oregon School Activitites Association announced on April 8 that it was going to be suspending the rest season due to the COVID-19 pandemic. It really put a damper on plans for every member of the track and field team.

“I was emotional. I cried a little bit,” Robb said.

Though heartbroken for the season that never was, Robb chooses to push forward. He often finds himself back at the track alone, running through drills and pushing to get better.

“I continue to work on my form and try to make that better,” Robb said. “Then I try to get my three step down and make it quicker so I can get over faster.”

His dreams of being able to compete in college now have become trickier. While reaching out to Western Oregon University, Robb found out that longtime Wolves head coach Mike Johnson was going to be retiring.

“I need to figure out who the new head coach is, but if I don’t hear anything I probably will try and walk on,” Robb said.

Cole sees her former student-athlete equipped for the challenge of walking on, and can see him be a vital part to the Wolves track and field team of the future.

“I think he has a ton of potential,” Cole said. “If he continues to love it like he does now, by the time he is a junior or senior, he can be an impactful athlete for them.”

Though he is focused on his future, Robb cannot help but reflect on his time with the Bulldogs. He was grateful for all the relationships he’d made, and Cole’s impact on his athletic career.

“I’m glad that Suzy made me do hurdles because I don’t think I would be doing them,” Robb said. “I am definitely going to miss going on long bus rides, hanging out with my friends and meeting new people from different areas.”

After spending his fall under the Friday Night Lights, and his winter on the hardwood, BHS senior Spencer Shirtcliff was excited to find himself heading back to the baseball diamond. After a strong season last spring, he knew his development was vital to the team’s success.

“I played a whole summer after my regular season my junior year, and found myself back in the cages a couple of months before the season was supposed to start,” Shirtcliff said.

As the team prepared for the season, Shirtcliff and his teammates were excited to face their opponents on their schedule. When the Oregon School Activities Association announced it was following the executive order made by Gov. Kate Brown, all sports ceased operations due to COVID-19, which effectively ended spring sports on April 8. This left Shirtcliff feeling unsatisfied.

“I was kind of in shock. I actually really didn’t believe it at first,” Shirtcliff said. “We hadn’t really been hit by it so I didn’t think it was that bad.”

Now that this season is lost, what hurts student-athletes the most is the growth they could have accomplished in competition — something that head baseball coach Tim Smith sees as a problem for his graduating seniors and his team.

“Everyone lost something, you don’t miss a season without having an impact to not be able to be there and at least practice,” Smith said.

That is definitely the case for someone like Shirtcliff, who is currently speaking with small schools in the area for a chance to possibly play baseball on the collegiate level.

“He’s looking at Blue Mountain Community College,” Smith said. “The coach is supposed to be calling me.”

Coaches like Smith are now facing hurdles of getting up-to-date film and content to help their student athletes who have mutual interest in playing their sport at a college.

“They are always interested in how they will compete and we haven’t been able to do that,” Smith said.

Shirtcliff knows that the loss this year puts him at a disadvantage, as many of these schools were interested to see how his senior season was going to turn out.

“It really sucks, my fellow seniors and I were planning on having a really good year,” Shirtcliff said. “I was hoping to have a year like last year, but go deeper in the playoffs.”

Though his future career in baseball remains uncertain, Shirtcliff is motivated now more than ever to have his time on the diamond end on his terms, and will play next year.

“It does make me want to play at the next level even more because I have unfinished business,” Shircliff said.

He hopes that student-athletes who are younger than him will not let the pandemic dictate their effort, and that they will continue to practice and work hard to be ready to compete in their respective sport.

“They need to not see this as a disadvantage and keep working,” Shirtcliff said. “They need to try and not make it as bad as it is and prove themselves.”

This is part three of a three-part series looking at how northeast Oregon student-athletes — from Umatilla, Union, Wallowa and Baker counties — are dealing with seeing their spring season lost to the coronavirus.

LA GRANDE — This was going to be the year the La Grande softball team left its legacy.