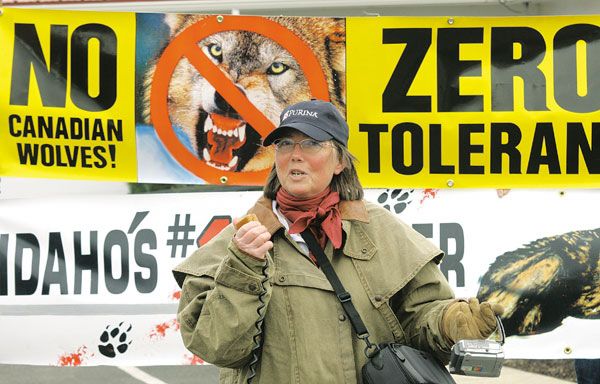 Joseph rancher Kerry Tienharra speaks at the anti-wolf rally in March 2011 outside the offices of the Oregon Department of Fish and Wildlife in La Grande. 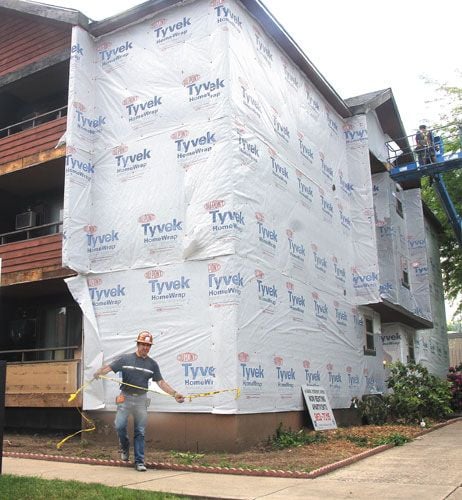 Project assistant superintendent Richard Mackie marks off project boundaries in 2011 at the La Grande Retirement Center. The center received a complete interior and exterior remodel, with lumber, fixtures and appliances salvaged for the Habitat for Humanity Re-Store. 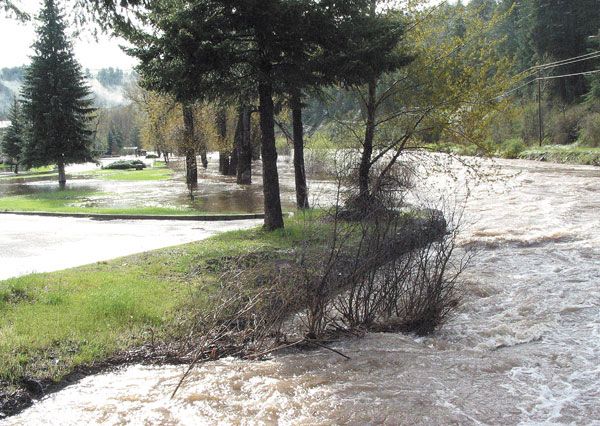 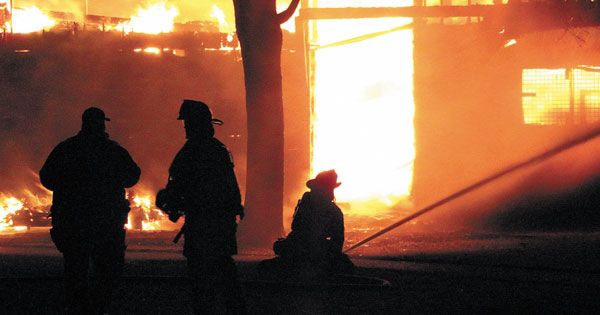 La Grande Fire Department personnel and others fight the blaze that burned the Riverside Park Pavilion in La Grande in February 2011. 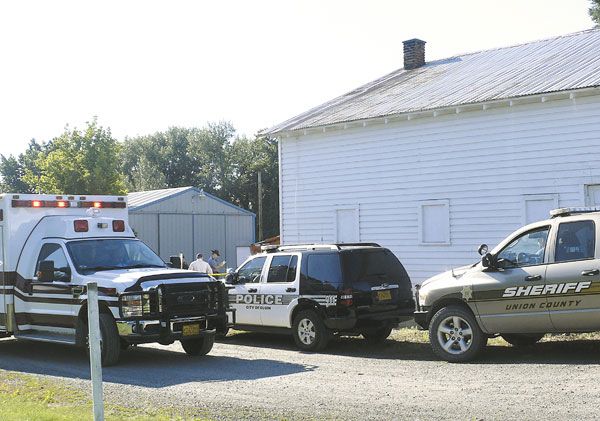 Law enforcement and ambulance personnel respond the morning of Aug. 1, 2011, to 480 S. Eighth in Elgin where an officer shot and killed a man following a domestic disturbance.

10 — Solar plant power up near Joseph

A 500-kilowatt solar facility near Joseph went live in November 2011. The Prairie Creek solar project can power as many as 100 homes.

The city of Joseph's sewer and wastewater treatment plant’s 100-kilowatt array will offset approximately 90% of the project’s power usage. Both systems are part of the Oregon Solar Incentive Program through Pacific Power.

“This is cutting-edge technology and the next wave of the economy," said Eric Anderson of Pacific Power at the time. "We've worked closely over the last 10 months with Sun Storage and we're pleased that the Prairie Creek Project is finally built. We are really glad they did this and used Oregon-made products.”

Army Spec. Thomas J. Mayberry, 21, formerly of La Grande, was killed Dec. 3, 2011, along with two other soldiers in Afghanistan.

Officials did not provide details of the attack and said only the soldiers died "when enemy forces attacked their unit with an improvised explosive device."

His aunt, Julie Siefker of La Grande, said joining the Army changed Mayberry for the better.

"He wanted to be deployed. He wanted to go fight for his country. He made something of himself and he was so proud of it," she said, adding, "He is my hero. Absolutely, my hero."

Mayberry was survived by his spouse.

8 — EOU library to get $8 million facelift

Eastern Oregon University’s aging Pierce Library, which turned 60 earlier in 2011, was about to get an $8 million, top-of-the-bookshelf, $8 million interior renovation.

The work began in mid-September with a schedule to complete in the summer of 2012. The remodel would provide more natural light in the library, add a second-floor mezzanine and allow a striking view of Mount Emily from almost any portion of the main and second floors.

University officials at the time said the renovations would create a brighter, more spacious building, one both warm and welcoming to students.

La Grande’s Crossing the Blues festival came to an end in March 2011.

At the outset, the festival's biggest booster was then-Mayor Colleen Johnson. Back in 2007 she helped organize an arts-and-music celebration to showcase the city and draw throngs of visitors to the area. She left the city council at the beginning of 2011.

Jon Larkin helped stage the Crossing the Blues festival the three years of its existence. He told the La Grande City Council in March the leadership team intended to hand the festival over to an organization or group of volunteers willing to carry on. But the team could not find an agency to take it over.

"It has been disheartening to see a project we worked so very hard at dwindle in support and interest," Larkin said at the time, reading from a prepared statement. "Nobody wants to see the festival disappear, but it seems clear we do not have the manpower or leading agency to continue the tradition."

About 40 people showed up in March 2011 in La Grande for an anti-wolf rally, vilifying the species and also the government agencies that protect it.

Dale Potter, an Enterprise resident and the head of a group called Wolf Free Oregon, was a principal organizer of the rally. As the sign-carrying crowd formed up in the Bi-Mart parking lot to march on the nearby Oregon Department of Fish and Wildlife Northeast Region office, Potter gave a reporter some reasons for his activism.

"It's about the danger the wolf presents to the public and the diseases he carries,” he said then. “Wolves come right into the yards and leave scat. Dogs pick up the spores and carry them into the house and transmit them to people.”

While public safety was the main concern of some protestors, others had financial fears and business on their mind. Connie Dunham, whose family ranches in the Imnaha cattle country, said stock losses have been heavy since wolves started showing up around the ranch.

Dave Sherod represented Stewards of the Wallowas and said the group formed to help people protect their property and their freedom.

"We firmly believe the wolf is disrupting the peace of Wallowa County," he said.

Wallowa County Commissioner Paul Castilleja attended the rally. He said he sees the presence of wolves as an encroachment on property rights.

The walk to the state fish and wildlife office was uneventful. Agency personnel stayed inside as the crowd, mostly people from rural areas, gathered to listen to speakers.

Funding for the next Grande Ronde Valley Habitat for Humanity-built home in Union County was in an upswing the summer of 2011 thanks to the remodeling of the La Grande Retirement Center.

The sprawling residential complex on Seventh Street near Washington Avenue underwent a total makeover in 2011. Contractors remodeled all 46 apartments, and virtually everything they removed in the process ended up as donations to the local Habitat for Humanity Re-Store.

In Union County and other places, Habitat for Humanity builds homes for people who might not otherwise be able to afford them. The Re-Store sells the donated material, with proceeds going to the next local housing project.

The retirement center, owned by Enterprise-based Chrisman Development, was built some 30 years earlier. Center manager Donna Brownlee said at the time the owners decided on the remodel after purchasing the property in May 2009.

High waters submerged portions of Union County in May 2011.

Heavy rainfall sent the Grande Ronde River over its banks to record flood levels, prompting the National Weather Service in Pendleton to issue a flood warning for the river.

Catherine Creek in the Union area was on the rise, and crews worked to fill sandbags. Little Creek jumped its bank, and the high water damaged several homes. The Union and North Powder fire departments and students from Union High School filled sandbags. Reports of flooding also came in from Wolf Creek Lane and Gilikson Road near North Powder.

Union County Emergency Services warned residents about extensive lowland flooding between Island City and Imbler and the possibility that some county roads could be under water.

La Grande police and firefighters took on a series of fires in downtown La Grande the morning of Aug. 1, 2011. One blaze extensively damaged Dawn's Delights, a used merchandise store at 1409 Adams Ave.

While firefighters were on the scene, they found numerous other small fires in the area, including two in the alley behind Dawn's, two on Adams Avenue, two on Greenwood Street and one on Jefferson Avenue. One fire burned in a dumpster at M.J. Goss Motor Co., and another in a Goss Motor Co. parking lot. The fires also included one in the doorway of the Future 1 College of Cosmetology.

Firefighters faced some challenging conditions Feb. 12, 2011, when they were called to an early morning fire at the Riverside Park Pavilion in La Grande.

When firefighters arrived on the scene at 4:20 a.m., six minutes after receiving the call, the entire roof of the 97-year-old structure was ablaze.

The pavilion stored a variety of content, including kitchen equipment, a new mower and other lawn maintenance gear and property belonging to the Soroptimist Club. The fire destroyed the historic pavilion and everything inside.

Elgin Police Officer Eric Kilpatrick responded the morning of Aug. 1, 2011, to a disturbance at a home, where he shot and killed Richard Lee Shafer. He was 60.

According to Oregon State Police, which helped investigate the shooting, Shafer was inside his home and holding a rifle. The officer fired at least one round, and Shafer died at the scene.

A Union County grand jury found Kilpatrick was justified in the use of deadly force and cleared him of wrongdoing. But the residents of Elgin later recalled the mayor and the city subsequently ended its police department and contracted with the Union County Sheriff’s Office for law enforcement services. The shooting also resulted in a multi-million-dollar civil lawsuit in federal court.