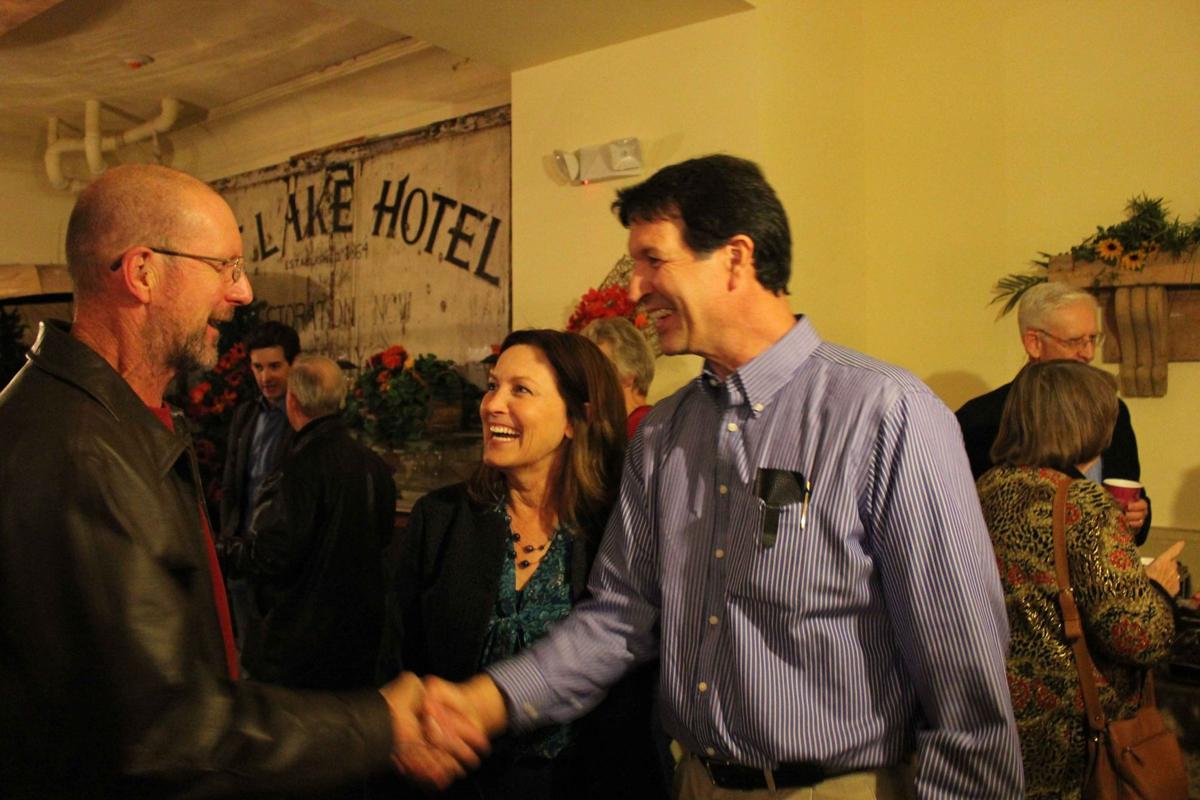 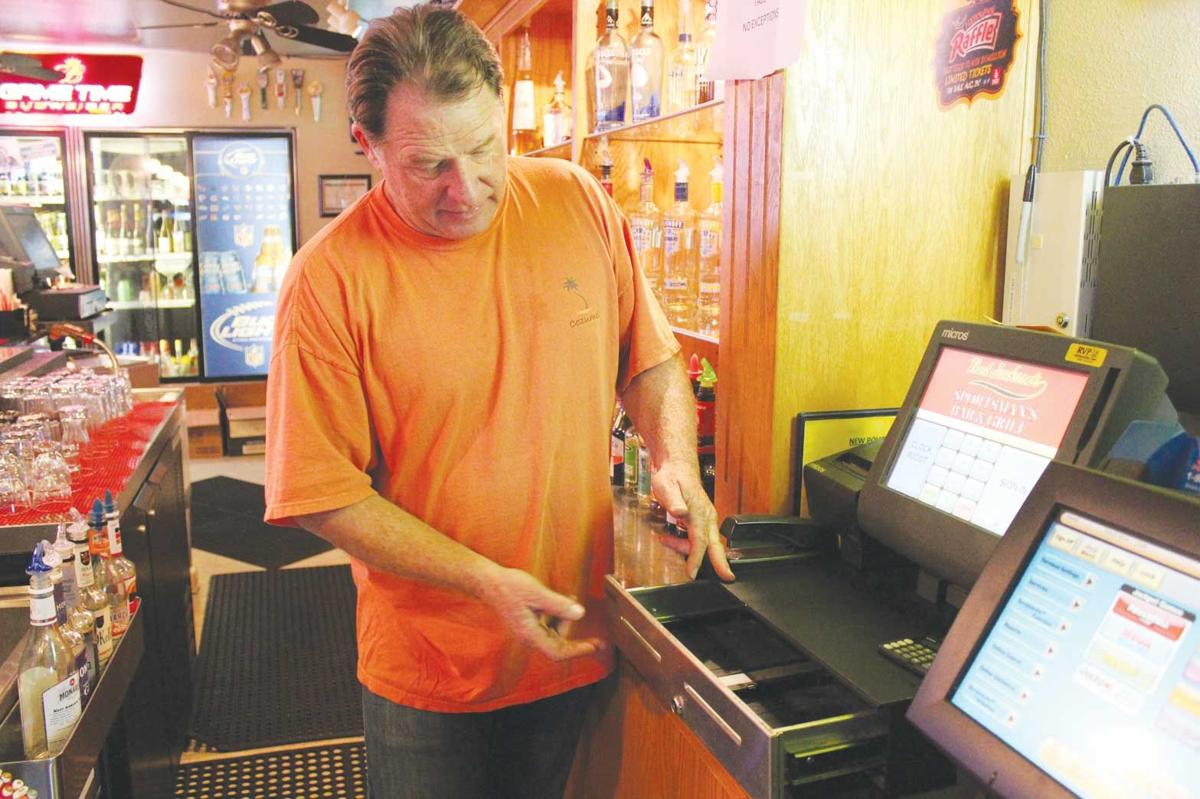 Bud Ashcraft, owner of Bud Jackson's in La Grande, points out damage done in an October 2014 break-in. Numerous businesses in La Grande and Island city were targets during a rash of burglaries. 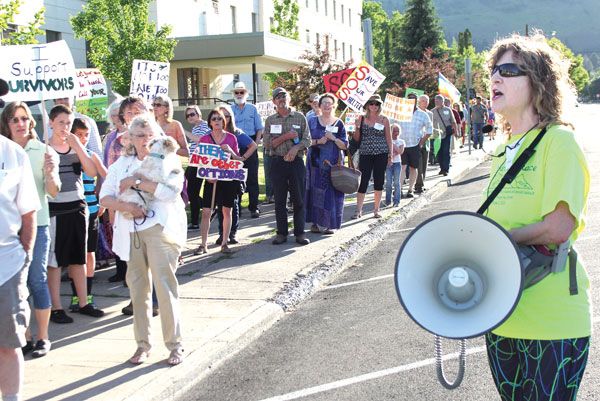 March co-organizer Sharon Evoy, right, leads protesters in chanting 'find another spot' Wednesday. The rally was held to show county commissioners their disapproval of the decision to demolish the Shelter From the Storm advocacy center building. (PHIL BULLOCK/The Observer)

Wallowa County draws thousands of visitors a year to hike its expanses, raft and fish rivers, ski the backcountry and take in the dramatic Wallowa Lake moraines. The moraines are geological features unique in Oregon and one of the state’s “Seven Wonders.”

Early in 2014, the Wallowa Lake Moraine Partnership entered into an agreement to buy almost 1,800 acres from the Ronald C. Yanke Family Trust, owner of a large swath of Wallowa Lake’s east moraine.

A successful deal would result in a Wallowa County becoming the owner and manager of a large portion of the Wallowa Lake Moraines, thus preserving the land for the public.

The project is ongoing and less than $500,000 away from hitting its goal to complete the transaction. The clock continues to tick down on the deal — the Wallowa Lake Moraines Partnership needs to secure the total $6,567,948 no later than Jan. 29, 2020.

Eastern Oregon University officials, staff, faculty and students had to travel long distances each month to attend the State Board of Higher Education meetings. But that practice ended in 2014 when the state voted in the spring to allow Eastern to have its own institutional board.

The La Grande-based college had the option of joining a consortium consisting of Oregon’s other regional and technical universities, which would have been under one board and a branch of Oregon State University, University of Oregon or Portland State University.

Then EOU President Bob Davies took public input and recommended the university get its own board, which the state Senate approved.

Firearms manufacturer Calico Light Weapons System announced in July 2014 it would relocate its world headquarters from Cornelius to Elgin, bringing jobs and a possible boost to the economy.

Calico Light's president, Chris Holmgren, said he loved Northeast Oregon and the region may be a better fit for the company’s products. He said people on the west side of Oregon lashed out at him in response to mass shootings. He said he even received death threats. Then Union County Commissioner Mark Davidson said the community was likely to welcome Calico Light.

The company continues to operate in Elgin.

Cove resident and La Grande business owner Greg Barreto won the election to the Oregon House as representative of District 58.

Barreto, owner of Barreto Manufacturing, entered the race in 2014. His campaign had some bumps along the way, such as at first accepting then returning a $30,000 campaign contribution from Nevada businessman Loren Parks. He ran against John Turner of Pendleton in the Republican primary.

Barreto and Turner, a former Marine colonel and former president of Blue Mountain Community College, faced off at multiple candidate forums. Come elections night, Barreto ran away with the race, taking 83% of the vote in Union County and 80% in Wallowa County. The bigger surprise came with winning 51% of the vote in Umatilla County.

Barreto faced Democrat Heidi Van Schoohoven in the general election and cruised to victory with 73% of the vote in the Republican-heavy district.

He announced in 2019 he would not seek a fourth term.

La Grande and Island City businesses in October were the targets of a rash of burglaries.

The culprits did not take much — cash that was on hand — but they left behind plenty of property damage. They broke windows to gain entry, then broke cash boxes and registers and in some cases made off with alcohol. Some businesses had security cameras that captured footage of the crimes, but law enforcement was not able to identify the criminals from the images.

Another spate of burglaries occurred in December, but police could not conclude the same people were involved in three sets of crimes.

The La Grande Urban Renewal Agency made a bold move in August 2014 with a 4-3 vote to help fund the establishment of a grocery store in downtown at the corner of Adams Avenue and Fourth Street.

Some members of the Urban Renewal Agency were dead set against funding the project, arguing the amount was too much and other projects needed funding. The agency ultimately decided to provide the funding as a loan that would convert to a grant if the project met certain conditions.

Eastern Oregon University again faced a tight budget and in 2014 made about $4 million in cuts largely due to declining enrollment.

The university began the process of cutting about two dozen faculty positions and around six administrative roles.

Then EOU President Bob Davies announced the cuts in June, marking the third time in his five-year tenure he had to cut jobs at Eastern. The college had to trim $3.8 million in 2011 and about $2 million in 2013. Eastern’s enrollment in recent years was trending down. Student credit hours dropped about 11% in 2014-15 and declined about 7% in 2013-14.

2014 became a landmark year for the La Grande School District. Voters in November passed a $31.85 million bond for maintenance and capitol construction.

This was the first construction bond district voters passed since the mid-1970s. Central Elementary School was a focal point of the campaign to pass the bond because $14.2 million of the revenue from the bond would go toward replacing the aging school.

The bond also would fund the construction of six new classrooms, renovations of the high school gym and auditorium, and security enhancements in all schools in the district.

Early in the year, the state opened the gates to legal medical marijuana dispensaries, which many cities and counties moved to ban until the establishment of regulations. Union County and Island City jumped on the ban, but La Grande failed to pass a moratorium by the May 1 deadline.

The vote to legalize recreational marijuana sent the city back to the drawing board and to considering a moratorium on all future marijuana businesses until crafting regulations.

1 — Shelter to be demolished for new courthouse

The community was excited toward the end of 2013 with the news Union County would receive $2 million from the state to build a new courthouse. That excitement in large part dissipated when the Union County Board of Commissioners voted in March 2014 to site the new courthouse at the location rented by the Shelter From the Storm Community Advocacy Center.

Commissioners said they would do what they could to mitigate harm to the nonprofit domestic violence shelter, which had come about as the result of a Community Development Block Grant specifically for Shelter From the Storm.

The organization notified the county it would sue, but Circuit Judge Eva Temple ruled Shelter From the Storm was a county tenant with an expired lease. Another eviction hearing determined the county could ask the nonprofit to vacate the building.

The county board’s move resulted in protests in support of the shelter, and the nonprofit filed an appeal to the county’s site plan application. The county and Shelter From the Storm in December reached an agreement, with the county paying $75,000 to help the organization move to its location in Island City.