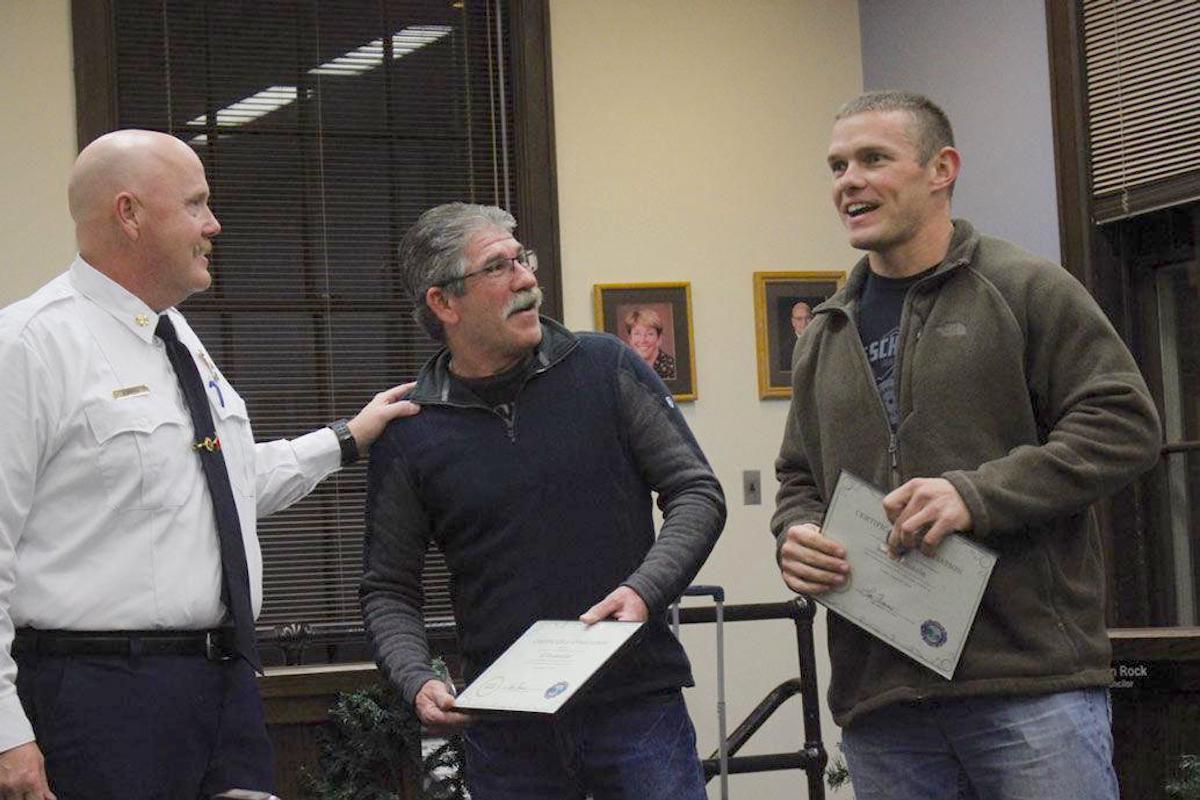 The La Grande Rural Fire Department at this La Grande City Council meeting in late 2018 recognizes employees of Oregon Trail Electric Cooperative for their role in the rescue of a hunter who fell from a tree and dangled upside down for two days. 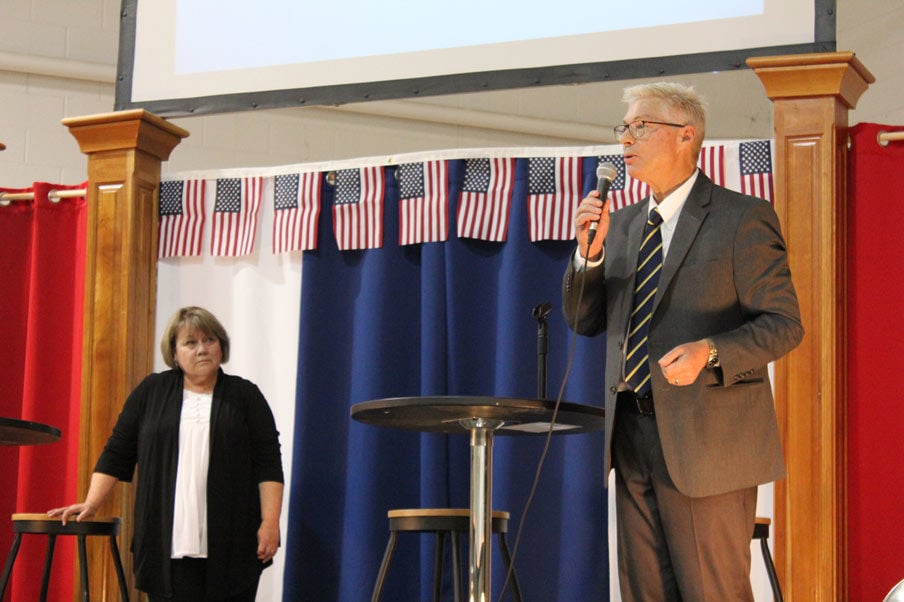 Mona Williams lost her position as circuit court judge of the 10th Judicial District in a tough 2018 race to challenger Wes Williams. 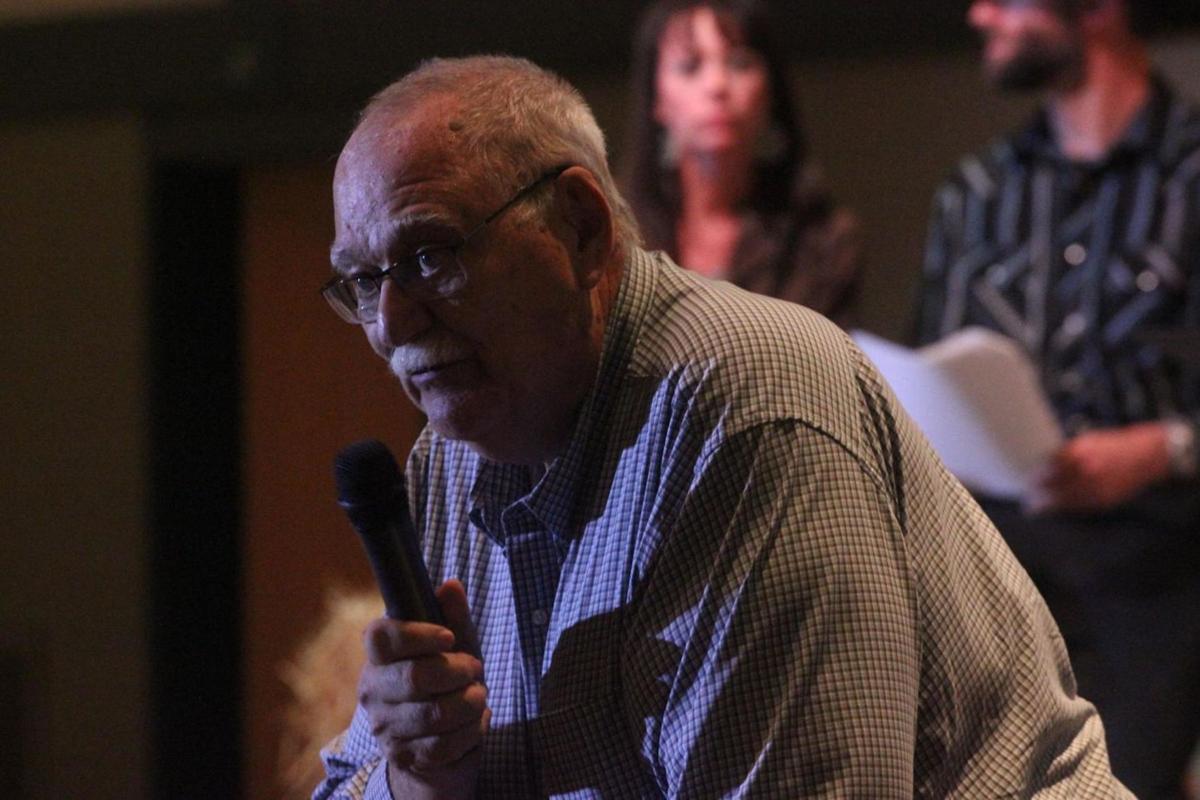 Steve McClure in 2018 reflects on almost three decades of public service, including his years as Union County commissioner.

10 — Rescuers save man dangling from tree

The hunter was in a tree north of Highway 244 in late August 2018 when he fell. His safety harness caught in the tree, and for two days he dangled upside down more than 30 feet in the air.

Steve Royston of Salem and his son Joseph Royston of Stayton were hunting in the area and heard Voelker yelling for help. Soon a multi-agency effort consisting of the La Grande Rural Fire Department, search and rescue members of the sheriff’s offices of Union and Umatilla counties and employees of the Oregon Trail Electric Co-op and U.S. Forest Service converged to save Voelker and rush him to emergency care.

Wes Williams eked out a win against incumbent Mona Williams in the November 2018 election for judge of the 10th Judicial District, which encompasses the circuit courts of Union and Wallowa counties.

Mona Williams was the Wallowa County district attorney when Gov. Kate Brown appointed her to the bench in Northeast Oregon, part of the governor’s effort to add diversity to the state’s judicial department. Wes Williams was an attorney in La Grande. The two are not related.

The Stop B2H Coalition in September 2018 wanted to give locals a sense of what a tower for the massive Boardman to Hemingway power line would look like. They set a 100-foot swath of foil on the hillside going up to Morgan Lake, which is visible from some parts of La Grande.

Coalition member Peter Barry owned the land that displayed the representation of the tower. He said the glinting silver became a topic of conversation, which was the group’s aim. But this was only a small representation, he said, of the 185-foot-tall towers that will hoist the 500-kilovolt line on its route from Boardman to the Hemingway substation south of Nampa, Idaho.

Steve McClure entered local politics in the early 1980s when he won the election to the Elgin School Board. He lost a tight race for Union County commissioner in 1988 but two years later accepted an appointment to the board. After that, he won seven full terms as county commissioner. He wrapped up 2018 as his last full year in public service.

Boise Cascade in May 2018 announced plans to phase out its lumber operations in Elgin, a move that would leave 90 people jobless. Woodgrain Millwork that September bought the Boise Cascade mills in La Grande and Pilot Rock, plus the particle board plant in Island City. The Idaho-based company officially took over the facilities in November.

The U.S. Forest Service aimed to present a new version of the contentious Blue Mountains Forest Plan after more than 15 years of meetings, collaborations and disagreements about uses on public forest lands. But a number of individuals and organizations were dissatisfied with the Forest Service’s proposals on a variety of fronts, from road closures to gazing limits, and they pushed for change. That revision did not come to fruition.

The Grande Ronde River Greenway project continued its years-long saga. The city of La Grande completed Phase 1 of the project about six years earlier, but Phase 2 for a paved trail from east of Riverside Park in La Grande to a pond on the east side of Island City remains in meeting rooms and discussions with city, Union County and Oregon Department of Transportation officials.

The lack of housing for residents of all income levels plagued the town and consumed hours of city council discussions. The city received a grant to conduct a housing study. The state listed La Grande as "severely rent burdened," and in November 2018 the city's planner, Mike Boquist, said La Grande was in a housing crisis, meaning 25% of residents were paying more than 50% of their income toward rent or mortgages.

Eastern Oregon University in 2017 sought proposals from for-profit companies to help develop online curriculum and marketing strategies. Three companies submitted bids, and EOU looked at making a deal with Pearson Online Learning Services. But in August 2018, EOU President Tom Insko announced there would be no deal largely due to Pearson’s high cost to students.

The grocery store in downtown La Grande survived a year and three months before shutting the doors in February 2018 for a “transition.” Owner Troy Berglund filed for bankruptcy. The grocery store stayed closed the rest of the year and reopened as Market Place Family Fresh in 2019.