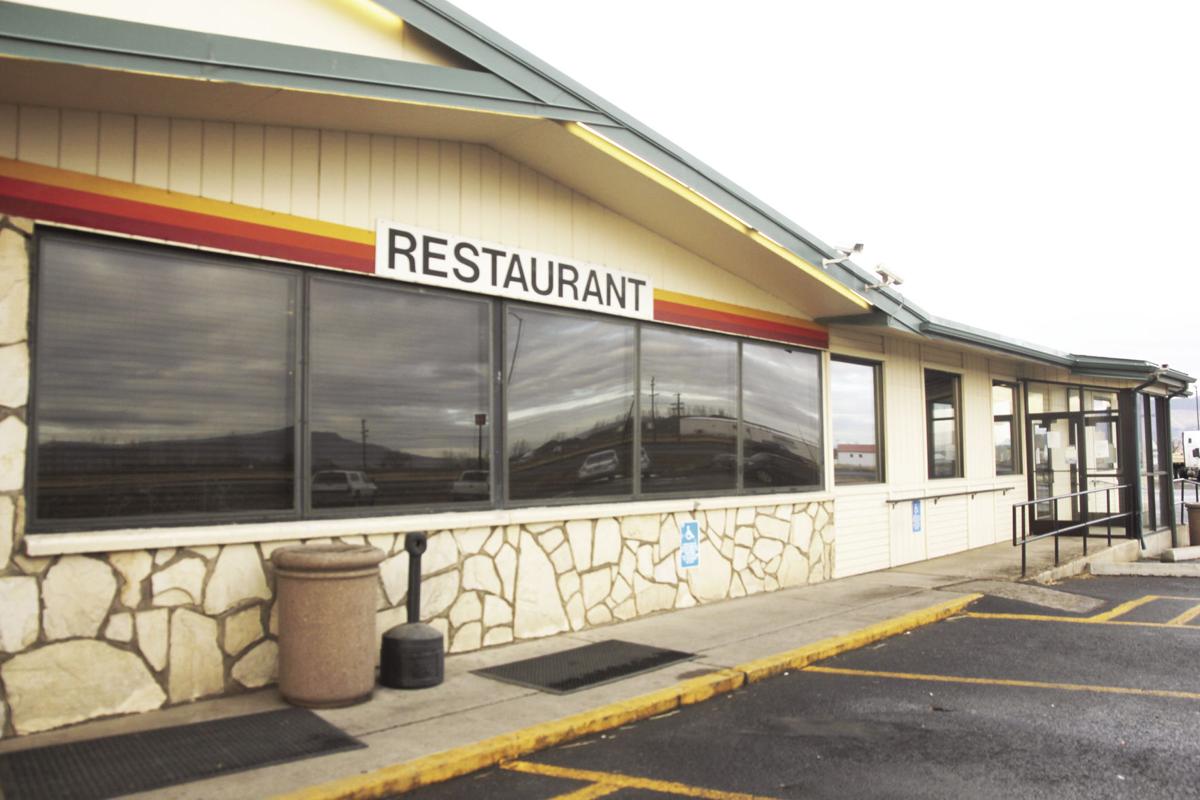 Pilot Travel Centers — which does business as Pilot Flying J — became the new corporate owner of the Flying J truck stop on the outskirts of La Grande. The restaurant was a popular eatery and meeting spot. But on Nov. 3, local owners shut it down with little notice to the community. 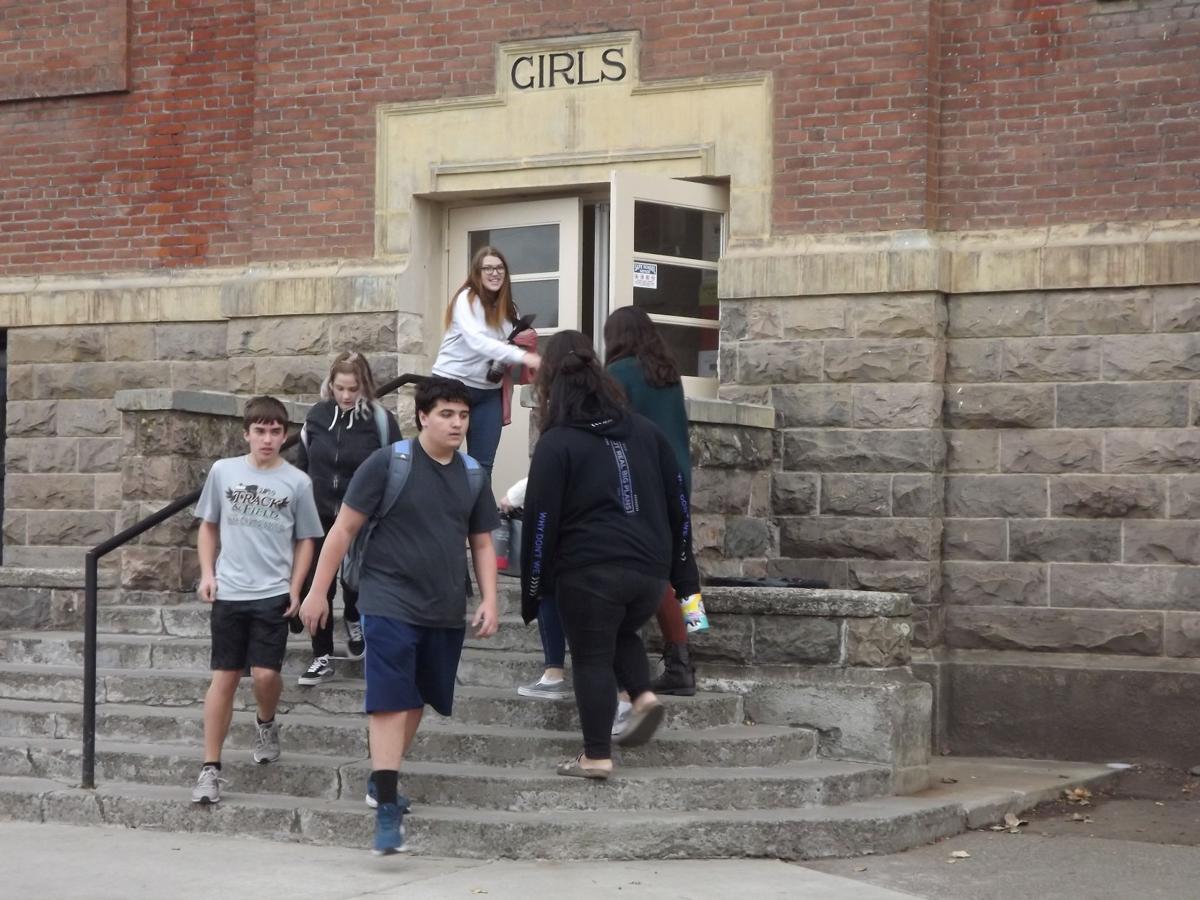 Students exit Monday afternoon from the north entrance of Union High School. The school district might make the entrance handicapped accessible with the funds from the bond voters passed Nov. 5. 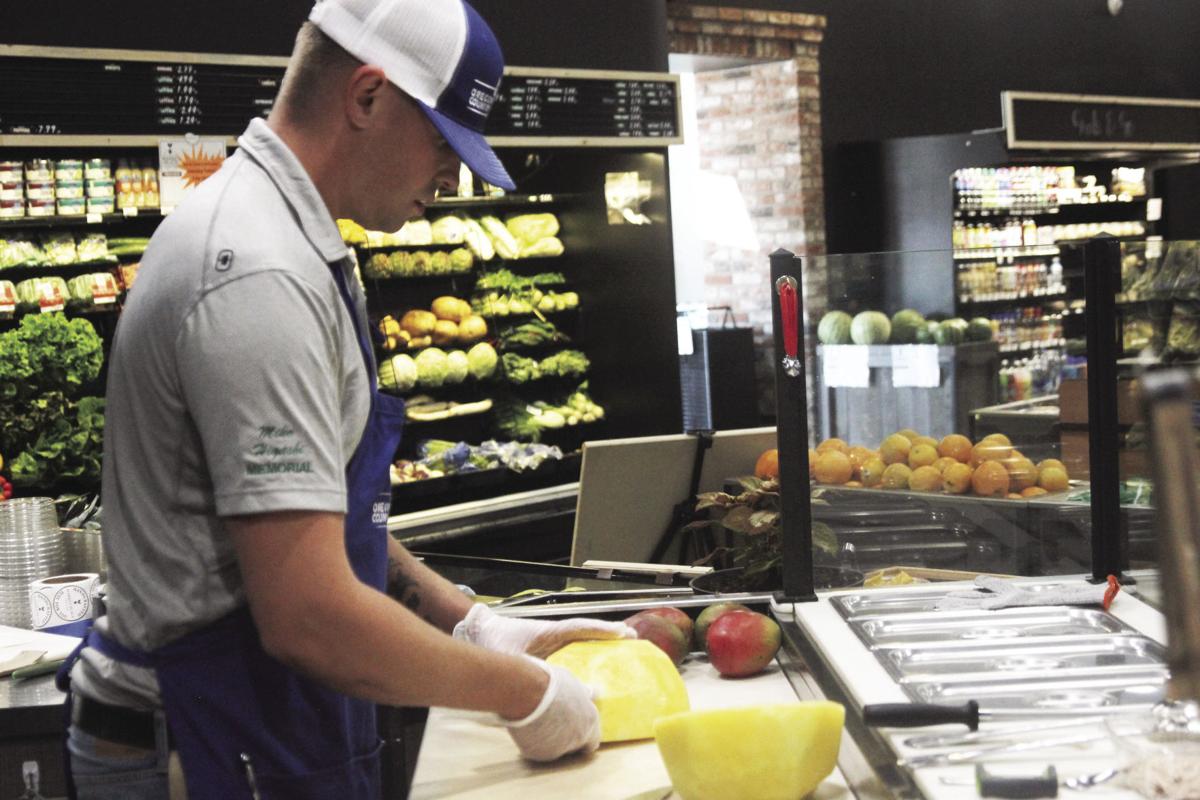 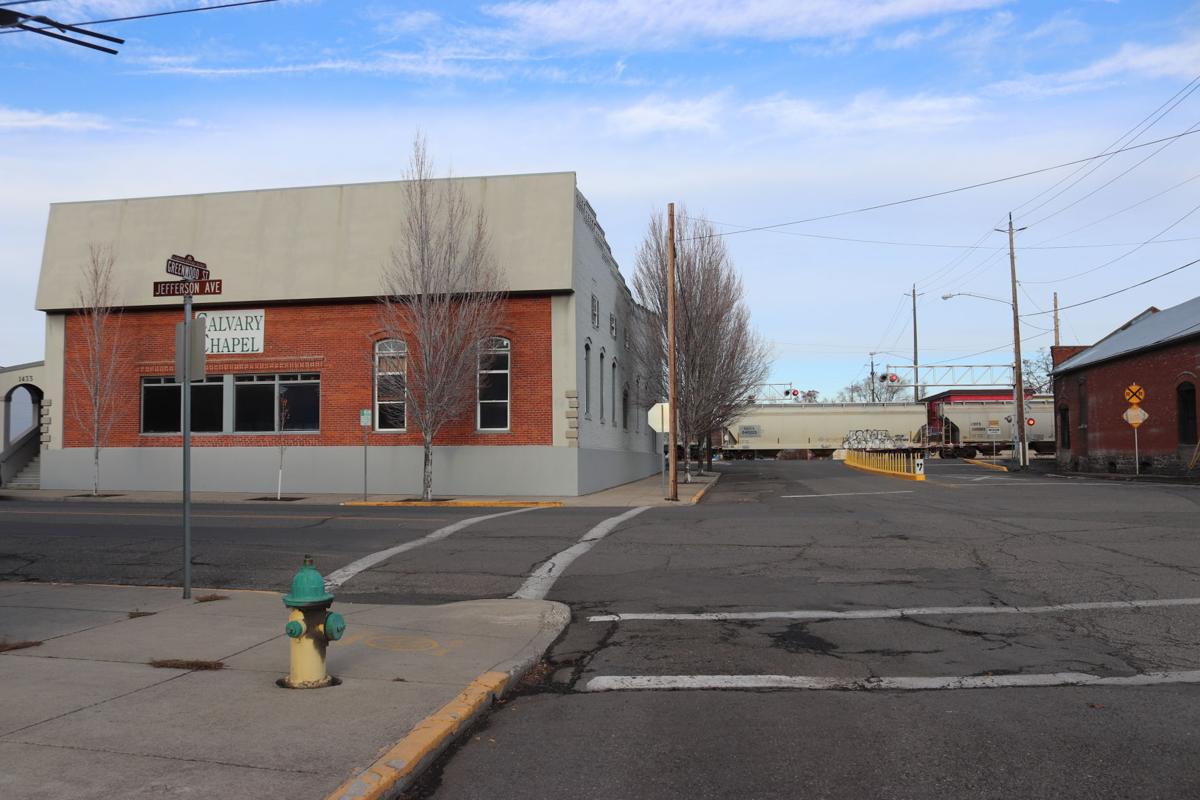 A train in early December passes behind Calvary Chapel in downtown La Grande. The blare of train horns were an all-day occurrence that interrupted sermons at the church. That changed Dec. 27 when La Grande's quiet zone banning most train horns went into effect. 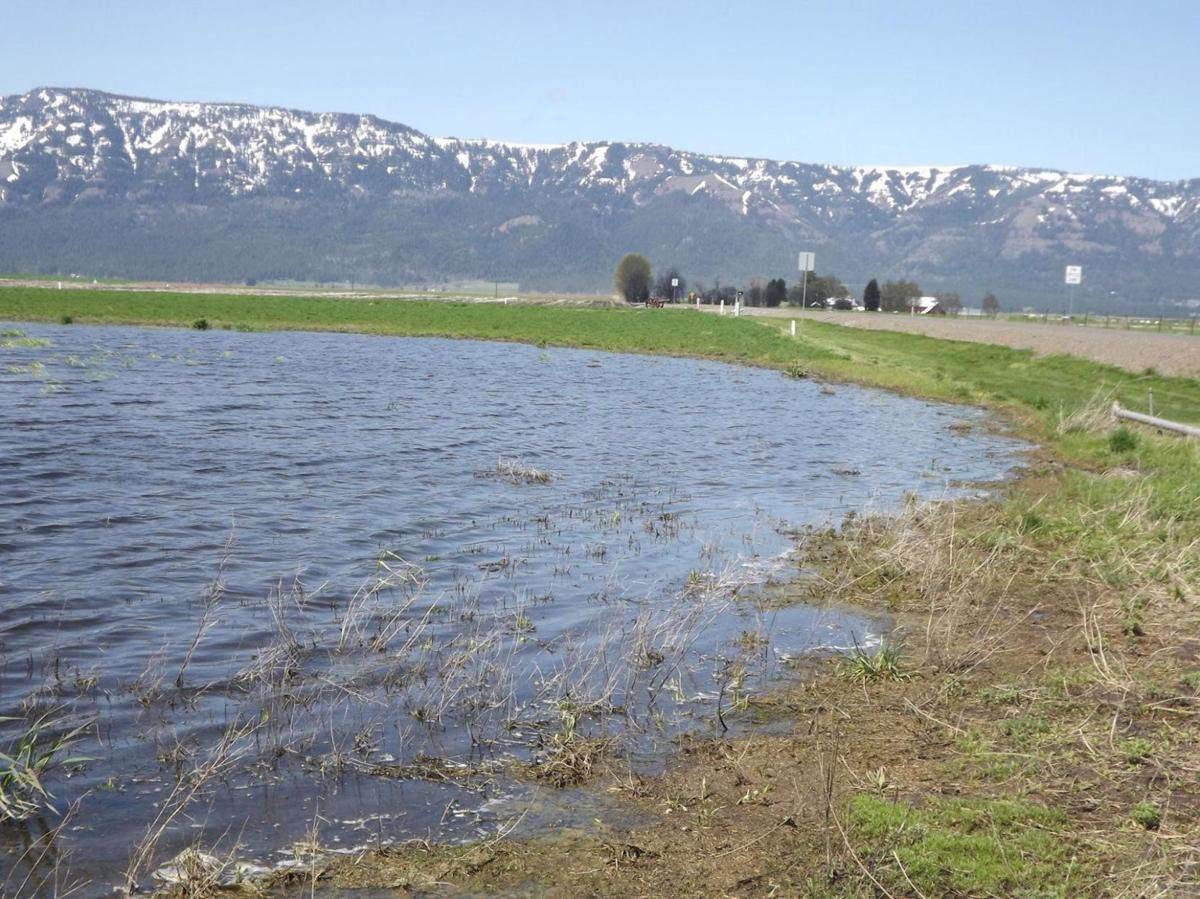 Flooding in April submerged thousands of acres in Union and Wallowa counties, including this portion of the agricultural land between Imbler and Cove. 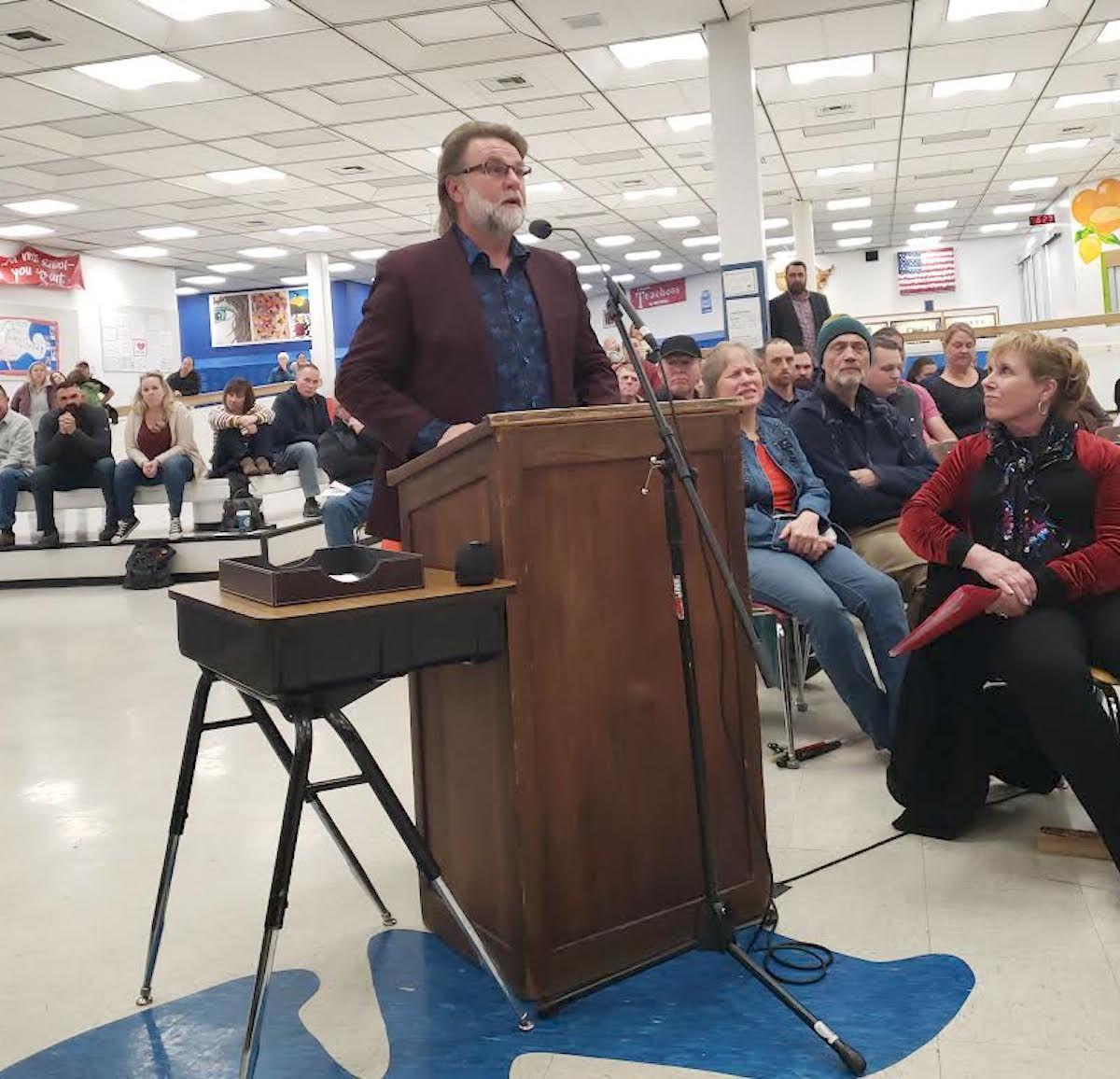 Developer Al Adelsberger urges the La Grande City Council during its public hearing in December to uphold the appeal he filed to prevent the Union County Warming Station from opening at 2008 Third St. The council denied the appeal with a unanimous vote, and Adelsberger is working toward a transitional housing facility.

The restaurant at the Flying J truck stop on the outskirts of La Grande was a popular eatery and meeting spot. But on Nov. 3, owner Brian Waldrop shut it down with little notice to the community.

Public records, however, revealed Pilot Travel Centers — which does business as Pilot Flying J — bought the place for a mere $10, although there could have been other parts of the transaction that were just between the parties. Records with the La Grande Building Department showed Pilot Flying J plan an $800,000 remodel of the restaurant interior, including putting in a Subway restaurant and a Mama Deluca’s pizza place, effectively nixing the establishment for meet-ups.

After The Observer published the story, Pilot Flying J sent a news release about the acquisition and coming renovations.

Voters in the Union School District in November overwhelmingly approved a $4 million bond to help pay for major upgrades to its buildings. The passage — 65.7% to 34.3% — in the small district qualified for a matching grant from the Oregon School Capital Improvement Program, thus giving the district $8 million.

The Union School Board developed a list of 18 project for the funds, from security improvements to repairing roofs and crumbling concrete stairs. The board this month selected the Wenaha Group as the construction management provider for the school district’s three-year renovation plan.

The grocery store at the corner of Fourth Street and Adams Avenue in La Grande re-opened its doors to customers in May, giving downtown a place to shop and dine in.

New co-owners Marco Rennie and David Yount bought the business in May 2018 and rebranded it with a focus on community while keeping it part of the larger Market Place complex, along with Le BeBe Cakes and the Market Place Underground.

The massive project to build a 293-mile, 500-kilovolt transmission line across much of Eastern Oregon continued to trudge through the Oregon Department of Energy’s multi-year review. Even so, the La Grande City Council in April declared its opposition to the project, which would pass through Union County and the La Grande area.

Two groups in La Grande — Stop B2H Coalition and Greater Hells Canyon Council — filed a lawsuit in federal court in November to block the project, contending the Bureau of Land Management and U.S. Forest Service, which authorized the transmission line, failed to adequately review the potential environmental and other effects of the power line that Idaho Power Company wants to build.

The state energy department’s Energy Facility Siting Council met in Pendleton this month to review the project’s draft review order and take comments from the public and Idaho Power.

Loretta Williams was at her home in Cove on the phone with 911 early Nov. 18, 2018, when dispatchers heard her confront a man and then the sound of a loud noise. Law enforcement arrived moments later. Williams was dead, the victim of at least one gunshot.

The following month, the sheriff’s office arrested Steve Edward Hamilton, 66, of La Grande, also for the murder and for conspiracy to commit murder. Rasmussen said the two men knew each other, but he has not divulged details of that relationship.

The district attorney’s office at that time amended its charges against Lee to include conspiracy to commit murder.

Lee and his defense attorney, Dean Gushwa of Pendleton, meanwhile, are heading to trial beginning April 1, 2020.

Train whistles at all hours off the day and night in La Grande are all but gone. The city after years of work received the federal approval for a Quiet Zone along a stretch of tracks close to downtown.

The La Grande City Council in February 2017 adopted City Manager Robert Strope’s priority to developing a zone free of train horns most of the time, and in October the council gave Strope the approval to notify Union Pacific Railroad, the Oregon Department of Transportation and the Federal Railroad Administration of the city’s intent to establish a Quiet Zone.

The city had to pay about $200,000 in safety improvements near railroad crossings and undergo crossing inspections. On Dec. 4, Mayor Steve Clements announced the city received approval of the zone, which officially went into effect at 12:01 a.m. Dec. 27.

Heavy rains and fast-melting snow in April combined to flood roads throughout Union County and turned thousands of acres of agricultural land into virtual lakes. The rising waters ended up causing little structural damage, but farmers in the Grande Ronde Valley saw the water cover acres and acres of their production land.

Blue Mountain Seeds of Imbler may have taken the hardest hit. The flood covered 1,000 acres of seed production land, ruining the harvest of the crop there until 2021.

The floodwaters drenched neighboring counties as well. The Wallowa County Board of Commissioners declared a state of emergency due to floods. And emergency management efforts were in full swing in Pendleton as McKay Creek crested its banks and covered residential streets and a city park.

The 123-year-old Observer was on rocky ground when its parent company Western Communications Inc. filed for Chapter 11 bankruptcy protection in January. Western Communications came out of bankruptcy seven years earlier but owed more than $7 million. The company’s plan was to dump The Observer, The Bend Bulletin, The Baker City Herald and other newspapers it owned to pay off the debt.

The EO Media Group, owner of the East Oregonian, The Daily Astorian and Hermiston Herald, among others, saw the opportunity to save fellow local papers. The Oregon company was the winning bidder at the bankruptcy auction of the sale of the businesses and became one of the largest media companies in the state.

Throughout the bankruptcy ordeal, The Observer never stopped publishing, even when employees could not depend on a paycheck from Western Communications.

The La Grande High School Tigers tore through opponents all season and did not slow down in the playoffs.

The Tigers received a police escort out of town the afternoon of Nov. 30 on the way to Hermiston to take on the Banks Braves, the defending Class 4A champion.

La Grande relied on a historic defense to stifle Banks and keep the out of the end zone. The Braves also put up a tough defense, but the Tigers stayed with their plan and capitalized on scoring opportunities, including a pick six. The last seconds ticked off the game clock, and La Grande won 21-0.

The win came almost 45 years to the day since the last time La Grande in 1974 took home the state championship.

The Union County Warming Station planned to open in October at 2008 Third St., its third home in as many years. But developer Al Adelsberger filed an appeal against the conditional use permit for the shelter. The move blocked the opening and set up the La Grande City Council for a heavy public hearing the evening of Dec. 4 to consider the appeal.

Roughly 200 locals filled the commons area at the La Grande Middle School for the hearing and dozens spoke, many with concerns, some with ire, some with angst and tears.

People supporting the appeal argued the Third Street site was not a good fit because of its location near downtown. Some said warming station organizers needed better safety policies and should provide thorough services for the homeless. Those against the appeal and for a swift opening of the station argued the Third Street facility was the best available for what the nonprofit could afford and the shelter was the only service offering meals and a warm place to stay the night in the winter.

The council listened during the course of almost four hours. Councilors said they heard little in the way of facts about adverse effects the shelter would create. The council voted 7-0 to deny the appeal. And Mayor Steve Clements made a promise to involve the city council in working with both sides toward a more comprehensive solution to local homelessness.

Adelsberger has held off on appealing the council’s decision to the state Land Use Board of Appeals. And he has been moving forward on bringing together members of the faith community, business owners, nonprofits and local government officials to open the doors of a transitional housing facility. Some 20 acres near Walmart in Island City is available for the plan, and while the full realization might be 10 years out, Adelsberger said the focus is on what the community can do in the next 12 months.