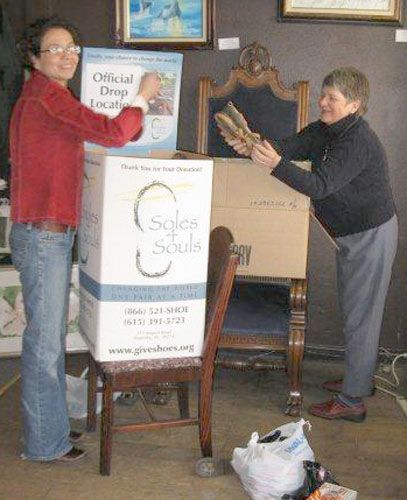 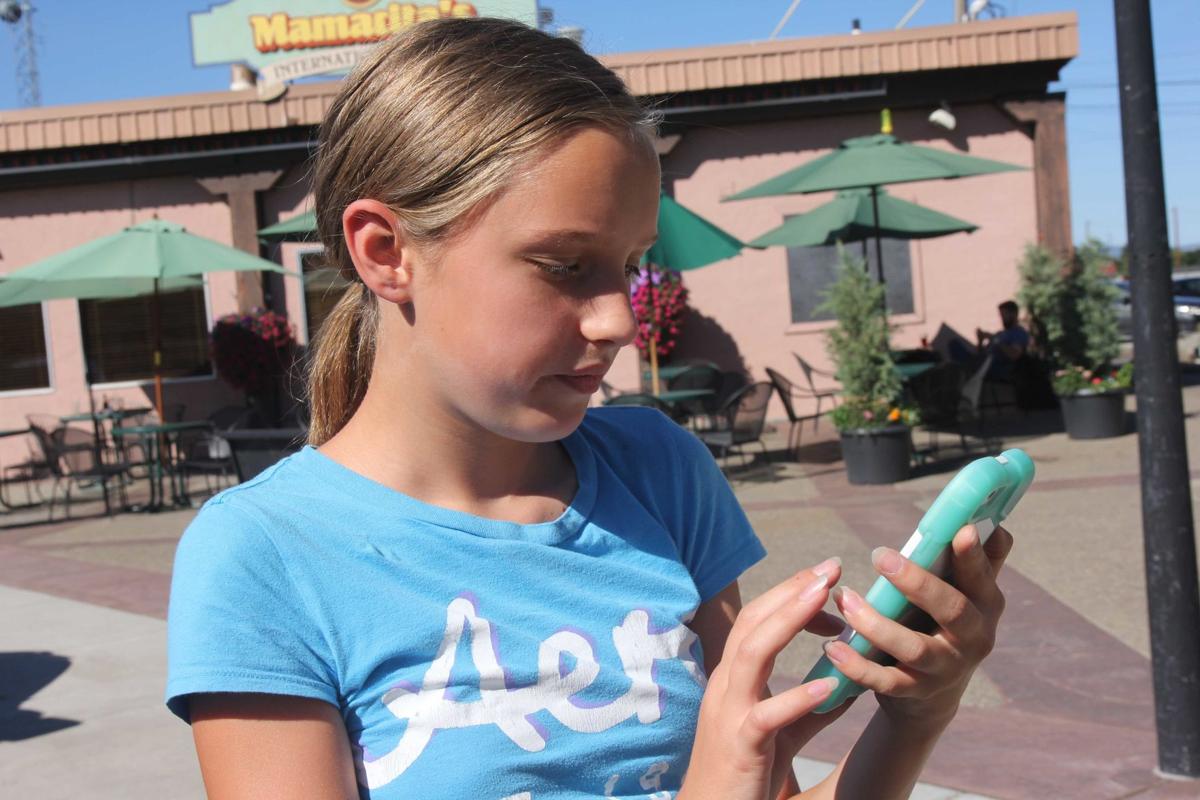 Kierstyn Gooch looks for Pokemon on her phone in July 2016 at Max Square, La Grande. The app sent children and adults throughout the nation on the hunt for virtual monsters. Kierstyn's mother, Amberlee Harder, drove her daughter to make sure she was safe. 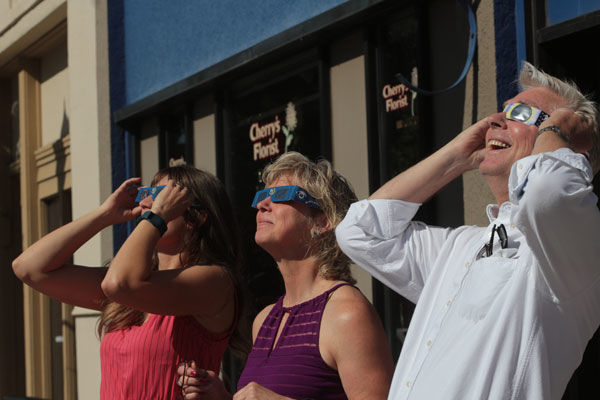 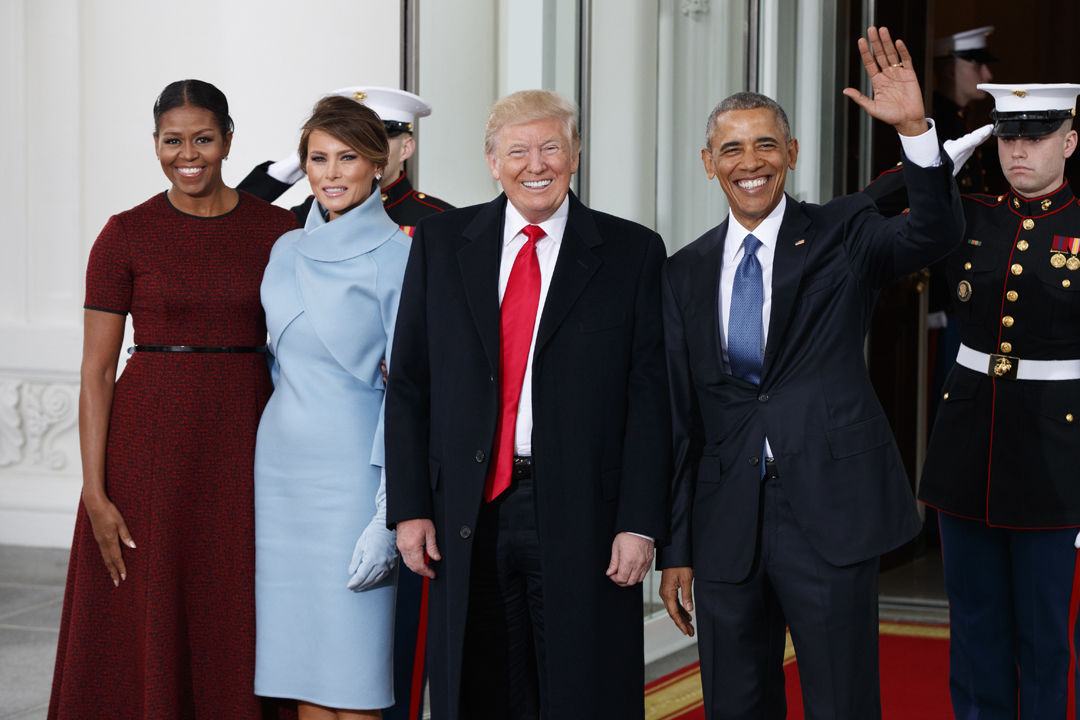 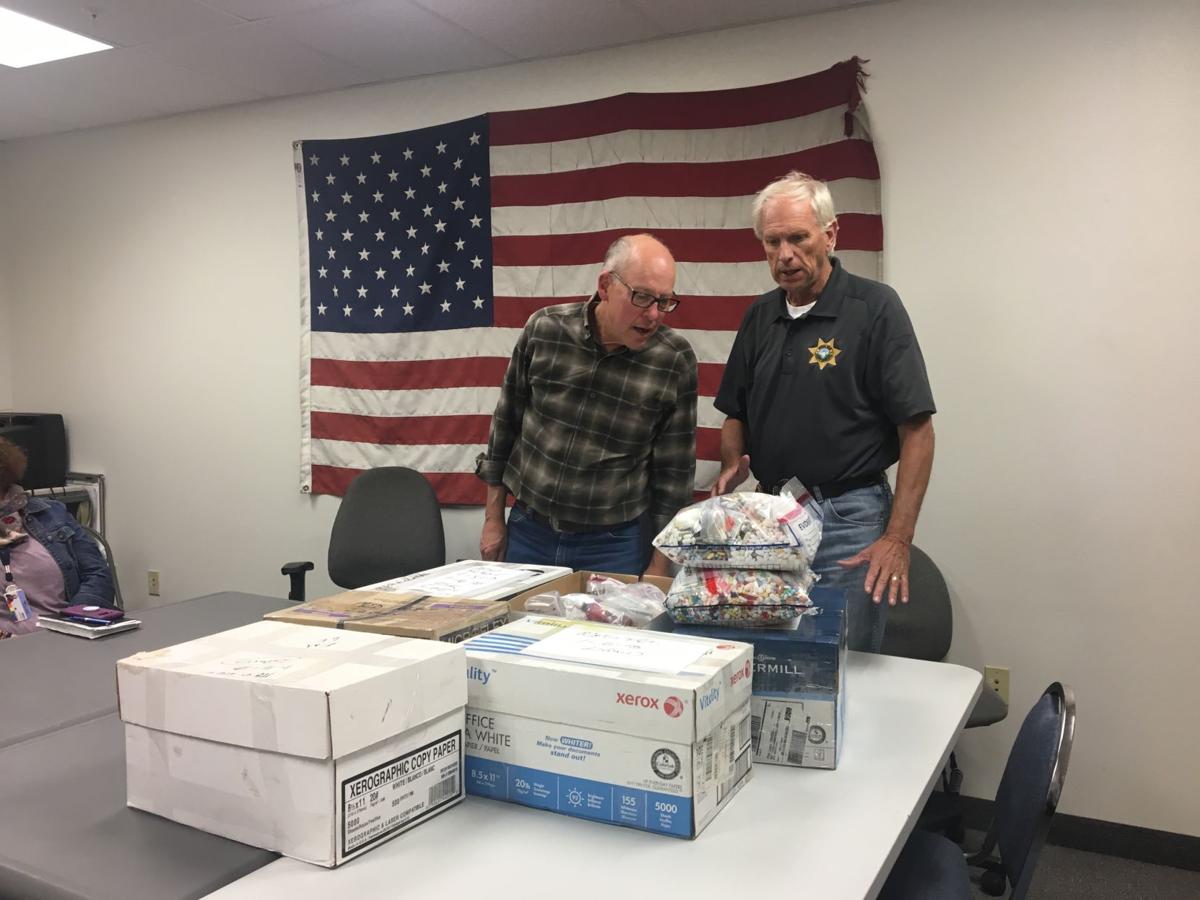 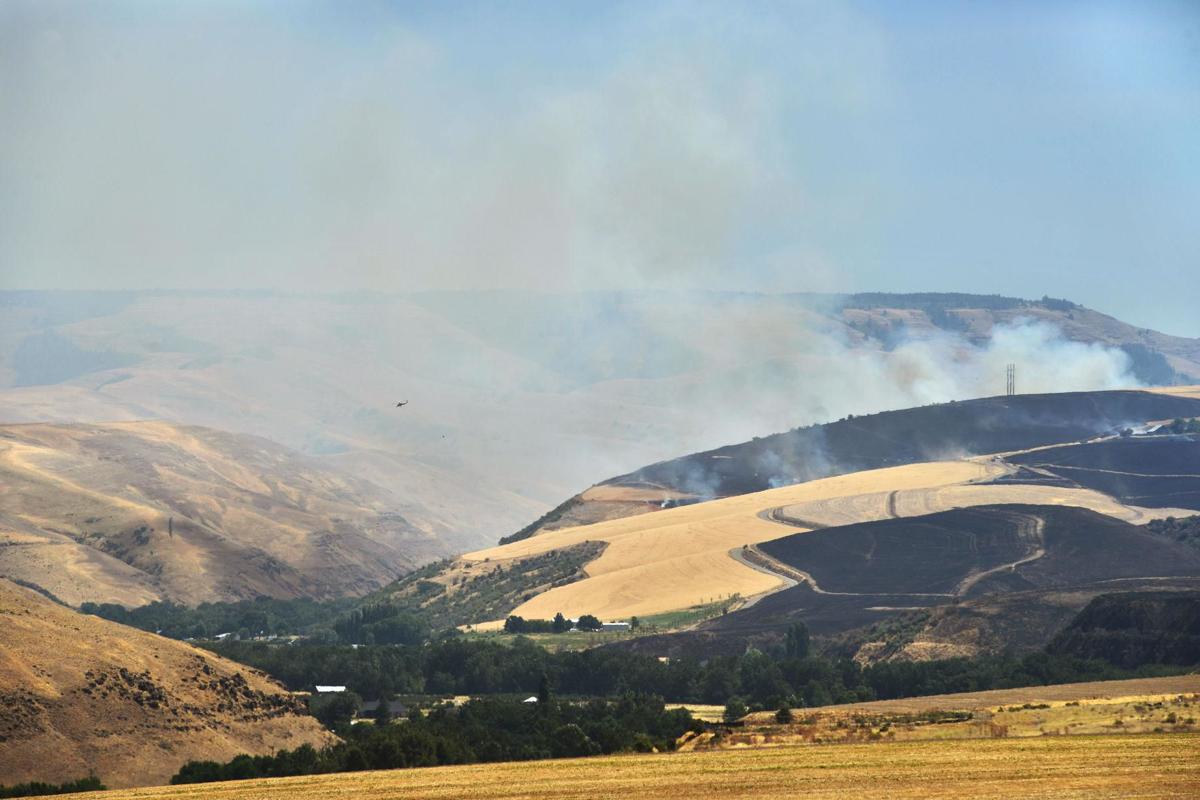 Global warming climate change remained a hot topic in 2019. A new study indicates climate changes will intensify wildfires in Oregon’s southern Blue Mountains, making them more frequent, more extensive and more severe. This August 2018 photo shows smoke from a wildfire billowing out of the Walla Walla River Valley in the foothills of the Blue Mountains east of Milton-Freewater. 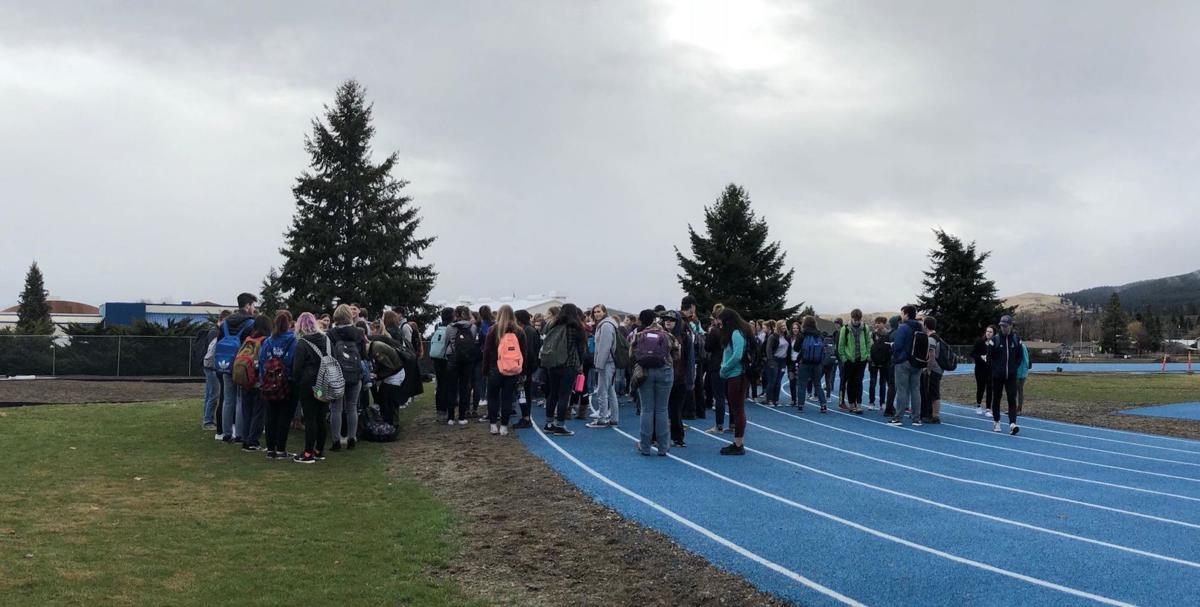 About 100 La Grande High School students participate in a walkout in March 2018 to protest gun violence.

The Observer scanned major news outlets, such as the New York Times, The Wall Street Journal, The Guardian and MSN to compile a list of top national and international news stories of the last decade.

A catastrophic 7.0-magnitude earthquake the afternoon of Jan. 12 struck Haiti. The quake collapsed some 250,000 homes and another 30,000 commercial buildings. The quake reportedly killed between 100,00 and 316,000 people, depending on the source of the data.

The Deepwater Horizon oil rig in the Gulf of Mexico exploded April 20, killing 11 people. Some 4.9 million barrels of oil flowed from the damaged pipe for 87 days before crews could cap it. The spill damaged Gulf ecosystems and fishing and tourism industries.

Congress on July 15 passed the Dodd–Frank Wall Street Reform and Consumer Protection Act, more plainly known as Dodd-Frank. The changes the new law made to financial regulations affected most Americans.

WikiLeaks — the nonprofit organization that publishes whistle-blower submissions — on Nov. 28 began releasing more than 250,000 classified cables between the U.S. State Department and its embassies, consulates and diplomats. The documents revealed a trove of sensitive international situations, including the U.S. spying on United Nations Secretary General Kofi Annan leading up to the 2003 invasion of Iraq.

Anti-government uprisings spread across the Arabic world in beginning in January in Tunisia, where the people ousted the president. Social media and smartphones played key roles in the movement.

The Arab Spring led to a violent civil war in Libya and the overthrow of Muammar Gaddafi. Opposition forces on Oct. 20 dragged the dictator through the streets and executed him.

Libya’s civil war continues to rage and contributed to the worldwide refugee crisis with more than 5.6 million Syrians fleeing the country. Thousands seeking refuge have died in the Mediterranean while trying to enter Europe.

A record 9.0 earthquake on March 11 struck off the coast of Tohoku, Japan. The quake was the most powerful recorded in Japan and caused a massive tsunami, killed nearly 20,000 people and damaged nuclear power plants.

U.S. Special Forces on May 2 killed Osama bin Laden, mastermind of the 9/11 terrorists attack, in an assault on a compound in Pakistan.

Steve Jobs died on Oct. 5. He was 56. The Apple co-founder revolutionized computer technology and media and built one of the world’s most valuable companies.

Kim Jong Il died Dec. 17 from a heart attack at age 69. The North Korean dictator had isolated the county, ruined its economy and starved its people. His death, however, also caused uncertainty on the international front during the transition to a new leader.

Superstorm Sandy hit the East Coast on Oct. 29, causing enough flooding to float cars in streets of Lower Manhattan. The storm killed 85 people in the U.S. Sandy would be the deadliest, most destructive and strongest hurricane of the 2012 Atlantic hurricane season.

An angry mob on Sept. 11 and 12 attacked the U.S. diplomatic compound in Benghazi, Libya, setting faculties aflame and killing four Americans, including the U.S. ambassador to Libya. The initial report was the attack was a response to an American video that mocked Islam and the Prophet Mohammed. The investigation, however, revealed it was a terrorist attack.

A shooter on Dec. 14 killed 26 people — 20 of them children 6-7 years old — at the Sandy Hook Elementary School in Connecticut.

A jury in Florida on Oct. 13 acquitted neighborhood watch volunteer George Zimmerman of the 2012 shooting death of 17-year-old Trayvon Martin, an African American. The Black Lives Matter movement began in the wake of the verdict with the hashtag BlackLivesMatter. The movement would continue to grow with street protests and demonstrations over police and others killing African Americans.

Two homemade bombs detonated in a terrorist attack April 15 near the finish line of the Boston Marathon, killing three people and injuring hundreds more, including 16 who lost limbs. A massive police manhunt ensued to capture two suspects. One died in a shootout with police, and the other ended up in federal prison on 30 charges, including the use of a weapon of mass destruction resulting in death.

The Guardian on June 8 published top-secret documents showing the U.S. National Security Agency used a data mining tool to collect volumes of information from computer and telephone networks. The next day, Edward Snowden revealed he was the source of the leak.

Malaysia Airlines Flight 370 left Kuala Lumpur on March 8 for Beijing but never landed. The missing airliner had 227 passengers and 12 crew onboard.

The annexation of Crimea

Citizens of Kiev in Ukraine protested their government accepting help from Russia. The people ousted the pro-Russian president, but before a pro-Western interim government could take charge, Russia in March used military force to annex the Crimean Peninsula.

The rise of ISIS

The terrorist organization ISIS — Islamic State of Iraq and Syria — gained worldwide attention for its public executions, beheadings, rapes and more, and for posting the crimes online. ISIS kidnapped and killed journalists and international aid workers and often broadcasted the slayings on YouTube. ISIS set up an Islamic state in Iraq and Syria and imposed the strict religious code of sharia law.

Police officer Darren Wilson, who is white, in August in Ferguson, Missouri, shot and killed Michael Brown, an unarmed 18-year-old African American. The local prosecutor did not charge Wilson with any crime. That decision set off protests, some violent.

Two gunmen on Jan. 7 attacked the Paris offices of the French satirical weekly magazine Charlie Hebdo, killing 12. The violence stemmed from the magazine's depiction of the Prophet Mohammed. Another man, who pledged allegiance to ISIS, carried out a second series of attacks. But that did not stop thousands of Parisians from publicly demonstrating their support and solidarity with Charlie Hebdo with signs displaying “Je suis Charlie” (I am Charlie).

The U.S. Supreme Court in a 5-4 decision in June ruled the Constitution guarantees marriage equality to gay and lesbian couples

Suicide bombers and shooters on Nov. 13 targeted six Paris locations. The Bataclan theater was the scene of the deadliest attack, which resulted in 89 dead and more than 100 injured. The death toll from the coordinated slaughter rose to 130 with nearly 500 more wounded. ISIS claimed responsibility for the violence.

More than 47,000 Americans died in 2015 as result of an opioid overdose. The crisis stemmed from the over-prescription and abuse of the highly addictive drugs. The crisis continues.

The UN Refugee Agency in December reported the number of refugees and migrants to Europe reached "staggering new levels." Nearly 1 million people — most fleeing war and persecution from Middle East countries — landed on Europe’s shores. Thousands more died at sea trying to get there.

A gunman in the early hours of June 12 killed 49 people and wounded more than 50 others at the Pulse nightclub — a gay bar in Orlando, Florida.

Britain in a referendum on June 23 voted to leave the European Union. “Brexit,” however, has yet to occur.

The Pokémon Go app in June sent youth and adults on the hunt to capture virtual monsters. The game also resulted in real-world injuries and damaged phones as well as water-cooler conversations and friendships.

An anonymous source provided German journalist Bastian Obermaye with 11.5 million files from Mossack Fonseca, one of the largest offshore law firms in the world. A coalition of news organizations worked through the documents to reveal how the rich use offshore tax havens to duck out of paying taxes. The news reports exposed heads of state, other government officials, celebrities and more.

President Donald Trump in June announced the U.S. will withdraw from the Paris Climate Accords or start a new deal.

Fire broke out on June 14 in a fourth-floor apartment in the 23-story high-rise in West London. Flames spread in moments to the exterior of the building and to all sides. Grenfell Tower had a “stay-put” policy, meaning resdient were to stay put until help arrived. The fire killed 72 people.

Total eclipse of the sun

Millions looked to the sky Aug. 21 to watch the total solar eclipse, and Oregon becomes prime viewing territory. The event may have been the most-observed solar eclipse in history.

Hurricane Harvey on Aug. 25 slammed into Texas with winds exceeding 100 mph and days later hit Louisiana. The hurricane submerged a third of Houston and caused $125 billion in damage, second only to Hurricane Katrina in costs. Hurricane Harvey also claimed 88 lives.

Category 4 Hurricane Maria less than a month later landed on Puerto Rico, resulting in the death of almost 3,000 people due to the lack of power, clean water and health care services.

President Robert Mugabe ruled Zimbabwe for 37 years, but a coup d’état ousted the dictator from power. Tens of thousands of anti-Mugabe demonstrators celebrated in the streets.

Several women came forward and accused Hollywood movie producer Harvey Weinstein of mistreatment. The trickle of stories became a fire hose as more than 80 women eventually accused Weinstein of wrongdoing ranging from harassment to rape over a span of decades. The MeToo hashtag went viral as women around the world took to social media and shared their stories of sexual harassment and assault.

Jamal Khashoggi was a Saudi citizen and U.S.-based journalist critical of the Saudi Arabian government. On Oct. 2, he went to the Saudi consulate in Istanbul to deal with paperwork to marry his fiancee. She waited outside for him, but he never returned.

Al Jazeera reported his murder, which resulted in public outcries for justice and a United Nations investigation that revealed Khashoggi was the victim of a “deliberate, premeditated execution.” The report also found credible evidence linking Saudi Arabia’s crown prince to his murder.

Oregon U.S. Rep. Greg Walden pushed the SUPPORT for Patients and Communities Act, a comprehensive approach to combat with nationwide opioid crisis. The bill cruised through the House and Senate with nary any opposition. Walden on Oct. 24 announced President Trump signed the bill into law.

The United Nations Intergovernmental Panel on Climate Change released a report in October stating the world may have only 12 years to stop irreversible damage from climate change. Greta Thunberg, a Swedish teenager, began a school strike for climate action in August outside the Swedish parliament. That resulted in major climate strikes around the world with calls to leaders to seeks solutions to slow climate change.

Massive protests began in June in Hong Kong against a proposal to allow the extradition of criminal fugitives to mainland China. Demonstrations grew in scope to demand real democracy and police accountability. The protests also grew in size, with perhaps a million or more participating.